STRANGER IN A STRANGE LAND, a classic SF novel coming to a TV near you 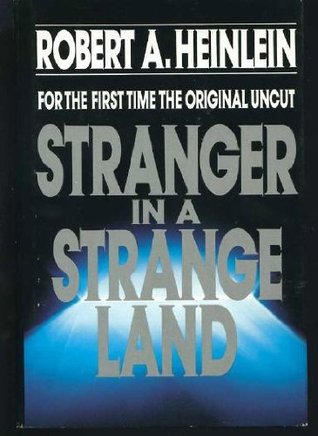 The Publisher Says: A human raised on Mars, Valentine Michael Smith has just arrived on planet Earth. Among his people for the first time, he struggles to understand the social mores and prejudices of human nature that are so alien to him, while his own “psi” powers—including telepathy, clairvoyance, telekenesis, and teleportation—make him a type of messiah figure among humans. "Stranger in a Strange Land" grew from a cult favorite to a bestseller to a classic in a few short years. The story of the man from Mars who taught humankind grokking and water-sharing—and love—it is Robert A. Heinlein’s masterpiece.

My Review: I gave it 4 stars for memory's sake. Now the folks at Syfy are adapting it for TV! Amazing to me that, once considered too racy for publication unexpurgated, it's now a TV-able property. For all its many faults, I'm glad Society has caught up with Heinlein's libertarian 'tude towards sex.

I read this as a preteen SF hound. It wasn't a favorite of my older sister's, so she tossed her copy at me one day while I was hanging around her place with an airy "if you're bored, read this" and two days later I came up for air. I think the primary appeal for me was the unapologetic therefore un-prurient sexuality of it. I wasn't taken with the philosophical bits at that point.


I’ve been kissed by men who did a very good job. But they don’t give kissing their whole attention. They can’t. No matter how hard they try parts of their minds are on something else. Missing the last bus—or their chances of making the gal—or their own techniques in kissing—or maybe worry about jobs, or money, or will husband or papa or the neighbors catch on. Mike doesn’t have technique . . . but when Mike kisses you he isn’t doing anything else. You’re his whole universe . . . and the moment is eternal because he doesn’t have any plans and isn’t going anywhere. Just kissing you.

That makes a person's interest in intimacy make sense. It's not cheesy hyperbolic overwrought smutty silliness. It's direct and clear and a darn good roadmap for an innocent to follow when sex finally stops being theoretical.

But time marches on. By age 17 or so, I was a theatre fag and ever so impressed with Theories of Beauty and Paradigms of Truth. I loved this:

Now, see? This is meat and drink to a kid in search of a way to integrate Art into his or her thoughtscape. It's both explanation and challenge, it takes aim at Artyness and fires bullets of Art to smash the Artful. Me likee.

But years have a bad habit of marching ever onward. Events occur that alter an individual's take on self, world, art; that also shatter Society's old consensus on ideas, attitudes, conventions:


Nine times out of ten, if a girl gets raped, it’s at least partly her own fault.

Uh. NO. And there's no room for argument. That's a categorical NO. As in not ever, in no way, at no time. That shit still flies around, as the Stanford Rapist case demonstrates. The little shit was laughing, LAUGHING, about what he'd done when he was caught; he got out of jail, not prison, in record time because "good behavior" somehow mattered; and he's had to register as a sex offender but still manages to live a full social life. Would you be seen dead near his morally degenerate, aesthetically repellent carcass? I know I wouldn't. And that is a very common attitude, I'm extremely happy to say, it's not as if there is no consequence to his action. Not enough by any means, don't get me wrong. He deserves to be under the prison for what he did to Amber Heard. But we're openly talking about it and many, many more people think my way than Heinlein's or the Stanford Rapist's about it.

I won't even go into Heinlein's anti-gay nature. It's not worth my time.

But can I dismiss the young boy's many positive take-aways because the old man sees what was once invisible to his youthful self? On balance, and after thinking about it for a few years, I conclude that I can't simply erase the good and useful lessons I myownself got from several readings of STRANGER IN A STRANGE LAND. If I'd read it for the first time this year, I wouldn't even have finished it. I'd be furious at any number of things. But I didn't, and that balances out my modern sensibility's outrage.

Penguin, that stodgy old house of classics sheathed in orange, includes this book in a six-volume set of modern classics of SF. Their sales pitch is very effective:


Six of our greatest masterworks of science fiction and fantasy, in dazzling collector-worthy hardcover editions, and featuring a series introduction by #1 New York Times bestselling author Neil Gaiman, Penguin Galaxy represents a constellation of achievement in visionary fiction, lighting the way toward our knowledge of the universe, and of ourselves. From historical legends to mythic futures, monuments of world-building to mind-bending dystopias, these touchstones of human invention and storytelling ingenuity have transported millions of readers to distant realms, and will continue for generations to chart the frontiers of the imagination.

The Once and Future King by T. H. White
Stranger in a Strange Land by Robert A. Heinlein
Dune by Frank Herbert
2001: A Space Odyssey by Arthur C. Clarke
The Left Hand of Darkness by Ursula K. Le Guin
Neuromancer by William Gibson

All titles I'd agree are seminal in SF, and are well worth celebrating with handsome editions.
Posted by Richard at 6:03 AM