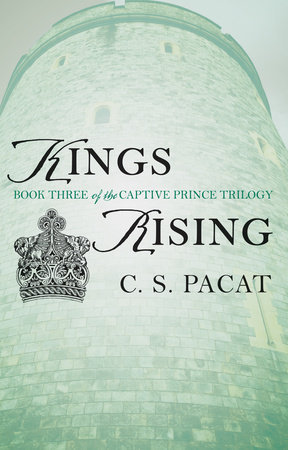 The Publisher Says: Damianos of Akielos has returned.

His identity now revealed, Damen must face his master Prince Laurent as Damianos of Akielos, the man Laurent has sworn to kill.

On the brink of a momentous battle, the future of both their countries hangs in the balance. In the south, Kastor’s forces are massing. In the north, the Regent’s armies are mobilising for war. Damen’s only hope of reclaiming his throne is to fight together with Laurent against their usurpers.

Forced into an uneasy alliance the two princes journey deep into Akielos, where they face their most dangerous opposition yet. But even if the fragile trust they have built survives the revelation of Damen’s identity—can it stand against the Regents final, deadly play for the throne?

My Review: I voted for this book in the 2016 Goodreads Choice Awards. Fantasy worlds with m/m love stories will always beat out teenaged girls with exceptional powers unrecognized by everyone else. The love/hate story here is both imaginative and fun.

It's not perfect, and several times my eyes had to be firmly schooled not to roll, but the bones of the story work well as a quest fantasy and I'm accustomed to endings that make little to no sense and feel tacked on like a bow taped to a present. The fact that sworn enemies become lovers isn't an issue, since it's a romance evergreen. It makes sense, after all, as the passion of hatred is fairly easily and often converted into the passion of love.

What makes the ending not work well for me is its promise of Happily Ever After. That's a bit rich, considering what's come before it for two and three-quarters books!
Posted by Richard at 6:31 PM