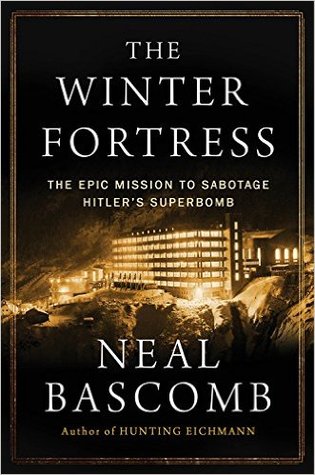 The Publisher Says: It’s 1942 and the Nazis are racing to build an atomic bomb. They have the physicists. They have the will. What they don’t have is enough “heavy water," an essential ingredient for their nuclear designs. For two years, the Nazis have occupied Norway, and with it the Vemork hydroelectric plant, a massive industrial complex nestled on a precipice of a gorge. Vemork is the world’s sole supplier of heavy water, and under the threat of death, its engineers pushed production into overtime.

For the Allies, Vemork must be destroyed. But how would they reach the castle fortress high in a mountainous valley? The answer became the most dramatic commando raid of the war. The British Special Operations Executive together a brilliant scientist and eleven refugee Norwegian commandos, who, with little more than parachutes, skis, and Tommy Guns, would destroy Hitler’s nuclear ambitions and help end the reign of the Third Reich.

Based on exhaustive research and never-before-seen diaries and letters of the saboteurs, The Winter Fortress is a compulsively readable narrative about a group of young men who endured soul-crushing setbacks and Gestapo hunts and survived in one of the coldest, most inhospitable places on earth to save the world from destruction.

My Review: I voted for this book in the 2016 Goodreads Choice Awards. I won the book in a Literary Hub Daily Giveaway, for which I thank them.

The beginning, for once, is the fifth star's vanishment. The physics lesson went on too long. Yes, I agree that it was needed. This being a popular history book, however, a lesson of half the length and a quarter the depth would've been more appropriate, not to mention more palatable.

But the tale itself is exciting and engrossing and, if over-detailed at times, sets a spanking pace. We owe a lot to the Norwegian resistance movement. Does anyone still know, or use, the noun "quisling," I wonder? It's Norway's other huge contribution to world culture. Oh yeah, some Brits were involved as well. In minor roles.