TO THE BRIGHT EDGE OF THE WORLD, my vote for Historical Fiction in Goodreads Choice Awards 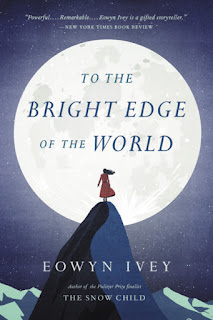 The Publisher Says: Set again in the Alaskan landscape that she bought to stunningly vivid life in THE SNOW CHILD, Eowyn Ivey's new novel is a breathtaking story of discovery and adventure, set at the end of the nineteenth century, and of a marriage tested by a closely held secret.

Colonel Allen Forrester receives the commission of a lifetime when he is charged to navigate Alaska's hitherto impassable Wolverine River, with only a small group of men. The Wolverine is the key to opening up Alaska and its huge reserves of gold to the outside world, but previous attempts have ended in tragedy.

For Forrester, the decision to accept this mission is even more difficult, as he is only recently married to Sophie, the wife he had perhaps never expected to find. Sophie is pregnant with their first child, and does not relish the prospect of a year in a military barracks while her husband embarks upon the journey of a lifetime. She has genuine cause to worry about her pregnancy, and it is with deep uncertainty about what their future holds that she and her husband part.

A story shot through with a darker but potent strand of the magic that illuminated THE SNOW CHILD, and with the sweep and insight that characterised Rose Tremain's The Colour, this new novel from Pulitzer Prize finalist Eowyn Ivey singles her out as a major literary talent.

My Review: I voted for this book in the 2016 Goodreads Choice Awards. A more heartfelt vote I've yet to cast.

Eowyn Ivey's modern Alaskan fairy tale THE SNOW CHILD was excellent. This epistolary novel is a step farther along the road to literary fame. I was totally captivated by Sophie and Allen's letters to each other; I enjoyed the use of other documents, like the young couples' journals and the paperwork that always attends anything to do with a government job and newspaper clippings recounting the excitement of the day for exploration. (How sad that this national trait is lost.)

The adventures the two nineteenth-century characters have are rip-snortin' bull-ridin' full-bore dangerous scary things. Sophie, in a small restricted life, busts out of her corset and strait-jacket to grab her some living while hubby is away having Manly Dangerous Feats thrown at him, and each enjoys their own hugely while supporting the other's excitement in letters from afar. It's a good marriage, it seemed to me. I think Ivey deserves a chunk of Alaska's petrodollars for making the place sound so incredibly, magically appealing. Her couples make getting married and being in Alaska sound like the road to happiness and concord.

The modern-day component to the story isn't the most involving. Joshua and Walt don't weave that old magic, perhaps because they don't make a couple. (Now that would've been interesting.) I am not willing to do much damage to my rating of the overall impact of the story, though, because the third leg of the stool is just a bit shorter than the others. Ivey has just vaulted onto the "buy her stuff right now" list with this outing.
Posted by Richard at 11:52 AM