THE HOTTEST GAY MAN EVER KILLED IN A SHARK ATTACK: Goodreads Choice Awards 2016 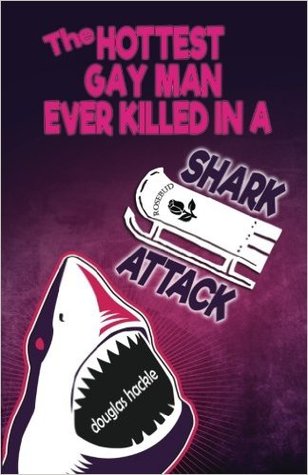 The Publisher Says: Ever since he was a young orphan, Hansel Higginzshire’s dream has been to break the long-held Guinness World Record for hottest gay man ever killed in a shark attack.

Big Problem #1: Hansel is not hot. At least not in the classical sense. In fact, the deformed man has a head the size of a wrecking ball.

Still, that shouldn’t stop a big-headed mofo from dreaming big, no??

But if those obstacles weren’t enough to impede Hansel’s path to Guinness World Record greatness, he finds himself wanted for murder. Now on the lam, his situation pretty hopeless, Hansel agrees to die a horrible death in a snuff film for just few measly bucks.

But perhaps the misfit companions Hansel meets on his westward cross-country trek to Hollywood—Rosebud (the drunken, down-on-its-luck, former actor, and sentient sled from Citizen Kane); a living, talking amputated arm that once belonged to a famous rock drummer; and a geeky keytar player born with a small polar bear head instead of a human head—can convince Hansel to follow his dreams again and attempt to become . . . THE HOTTEST GAY MAN EVER KILLED IN A SHARK ATTACK!!!

(By the way, yo mama is a character in this book. Yeah. For real. Sorry.)

My Review: I voted for this book in the 2016 Goodreads Choice Awards as a Humor category write-in. So should you, for the same reason you should watch that TV show where Nick Jonas plays a gay MMA fighter: Isn't it about time that cishet men pandered to the gay men of the world? They've been pandered to by women for-fucking-ever; their turn to do the pandering! C'mon boys, take it all off, get it on with someone you don't really want to, and suck (!) it up sex object.

The Goodreads Choice Awards first round of voting ends November 6th.
Posted by Richard at 6:25 PM