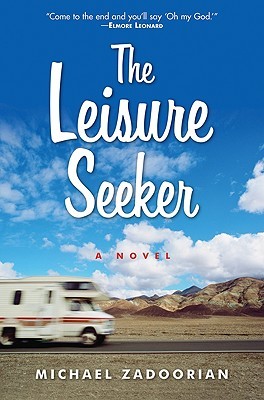 ***UPDATE 10/3/2017 Here's a clip that makes me really hopeful for the film's fidelity to the source material. And here's an Hollywood Reporter interview with Helen Mirren and Donald Sutherland! Dream casting!***


**UPDATE 11/10/2016 A feature film starring Helen Mirren and Donald Sutherland will debut in the US during 2017. Talk about dream casting for your novel's movie! I hope Michael Zadoorian is as well served by the screenwriters and producers as he stands to be by his characters' faces.**

The Publisher Says: A sort of Easy Rider meets The Notebook, Michael Zadoorian’s poignant, funny, vibrant, and unforgettable novel, The Leisure Seeker, is a story of two seniors who escape from their retirement home and embark upon a hilarious and touching end-of-life road trip. Here is a story that will appeal to a wide range of readers: from retiring Baby Boomers to fans of Mitch Albom, Tom Perotta, David Sedaris, Nick Hornby, and Nicholas Sparks. In fact, the Detroit Free Press says, “I would recommend Michael Zadoorian’s The Leisure Seeker to almost anyone.”

My Review: The Robinas got old one day. They couldn't tell you which day, exactly...he has Alzheimer's, she's just old and frankly after a certain point who can tell the days apart anyway?...but it happened, and now, well, The End isn't on the horizon anymore, it's on the to-do list.

Three quotes will tell you all that you need to know about this book. If they fail to appeal, so will this wry, loving, unsparing look at the parade's end.

“We pass a church with a massive blue neon cross, and I am spiritually lifted by feelings of great religiosity. No, I’m not, for crying out loud. Don’t be ridiculous. But what I do love about this road is how the gaudy becomes grand, how tastelessness is a way of everyday life.”(p37)

“I think about the people in the slides, most of them gone now, heart attacks and cancers, betrayed by the foods we ate, by our La-Z-Boys, by our postwar contentment, everyone getting larger and larger in every year’s photographs, our prosperity gone wide.” (p57)


“We pass on the Will Rogers Memorial in Claremore. I never much cared for the man. A big phony, I believe. Anyone who never met a man he didn’t like just isn’t trying hard enough.” (p79)
Posted by Richard at 6:30 AM