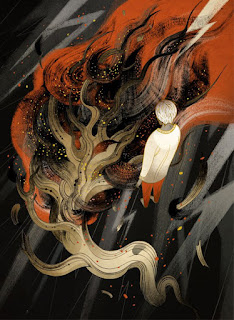 The Publisher Says: A fantasy novella about a disenchanted young Pakistani professor who grew up and lives in the United States, but is haunted by the magical, mystical tales his grandfather told him of a princess and a Jinn who lived in Lahore when the grandfather was a boy.

My Review: Robert Burns said it best when he wrote "To a Louse,On Seeing one on a Lady's Bonnet in Church":


O wad some Pow’r the giftie gie us
To see oursels as others see us!
It wad frae monie a blunder free us
An’ foolish notion:
What airs in dress an’ gait wad lea’e us,
And ev’n Devotion!

Sal(man) is a young academic trying to make his way in the vicious world of Boston academia. (The smaller the stakes, the nastier the battle.) His Pakistani immigrant parents live in a Florida trailer park with his paternal grandfather. His escape from the life of the parental units was studying mythology and folktales, an interest sparked by the stories his Alzheimer's-addled grandfather told him. One story in particular, that of the Mughal princess who ran a tea stall next to a tree that housed a jinn—an elemental being, not a "genie" as the Western bastardization of the Islamic culture's mythology created—tied to the royal bloodline of the Mughals. Legend had it that the jinn protected the princess, and the princess the jinn.

One fine day, according to Gramps (such a very American way to address a grandfather, eh what?), a young boy in the neighborhood climbed the eucalyptus tree and fell from it, to be succored by the princess. This was the ignition of a chain of events that forms the rest of the novella. The eucalyptus is slated for destruction; then lightning strikes it. Secrets. Half-truths and outright lies, misdirection and redirection and tantalizingly vague non-endings to unending stories. And an ending to this tale that made me glow with rapturous pleasure.

Sal explores Gramps's journal and many books after his death. It is an amazement to him that there are so many, since they weren't there when he went away to school and then began his career. It also astonishes Sal that his grandfather annotated the books in such an erudite and academic manner. The old man worked in a 7-11 after emigrating to the US in the 1970s! Who knew he had such thoughts!

The discovery of his Gramps's treasure trove is the next propulsive event in the tale's amazing unfolding. Sal is so riveted by the reading he's doing, all of it a deep inquiry into Islamic folklore, that his Anglo-Saxon girlfriend feels and is neglected. When Sal gets into Gramps's annotations so deep that he puts together a revolutionary cosmology that emerges from all the information, he is impelled to visit (for the first time in his life) Lahore, Pakistan, Gramps's native city.

I can't now go any further into the events of the novella because, for once, *I* don't want to give spoilers! *ME* the king of "yeah, so?" about them! But please listen carefully: This is the single best ending-cum-wrapup of a story I've read this year.

If that doesn't tell you enough to make you run right over and procure the story to read, you haven't paid me much attention. I am almost uniformly disappointed in endings. This one, not at all; in fact, the diametric opposite of disappointed.

To Usman Malik I offer a humble, grateful salam.
Posted by Richard at 5:35 PM