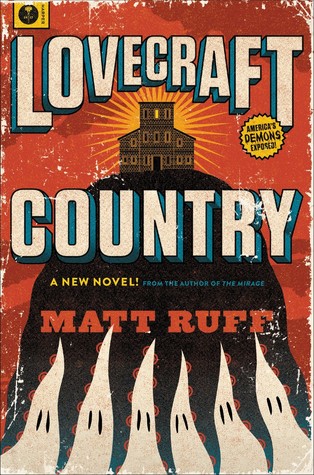 The Publisher Says: The critically acclaimed cult novelist makes visceral the terrors of life in Jim Crow America and its lingering effects in this brilliant and wondrous work of the imagination that melds historical fiction, pulp noir, and Lovecraftian horror and fantasy

Chicago, 1954. When his father Montrose goes missing, twenty-two year old Army veteran Atticus Turner embarks on a road trip to New England to find him, accompanied by his Uncle George—publisher of The Safe Negro Travel Guide—and his childhood friend Letitia. On their journey to the manor of Mr. Braithwhite—heir to the estate that owned Atticus’s great grandmother—they encounter both mundane terrors of white America and malevolent spirits that seem straight out of the weird tales George devours.

At the manor, Atticus discovers his father in chains, held prisoner by a secret cabal named the Order of the Ancient Dawn—led by Samuel Braithwhite and his son Caleb—which has gathered to orchestrate a ritual that shockingly centers on Atticus. And his one hope of salvation may be the seed of his—and the whole Turner clan’s—destruction.

A chimerical blend of magic, power, hope, and freedom that stretches across time, touching diverse members of one black family, Lovecraft Country is a devastating kaleidoscopic portrait of racism—the terrifying specter that continues to haunt us today.

My Review: I voted for this book in the 2016 Goodreads Choice Awards. I reviewed BAD MONKEYS not long ago, in preparation for reading this book. That was a three-plus star read, mostly for the sheer audacity of the ending, and I do love me a twisty ending.

This book gets four glowing platinum stars because, from giddy-up to whoa, there is no let-up in the wildly inventive excitement blasting from Ruff's imagination/fire hose. Not a moment when things slack off, not a corner left unscoured for dramatic (and amusing, lots of in-jokes of which nothing is made because it's enough that they're there) possibilities. And let me step outside the fiction's pleasures for a moment and say that this treatment of the vileness that is racism is both inventive and appropriate. For that reason alone, and there are plenty of others, this book merits your vote in the Goodreads Choice Awards.

Why not five? Because ending. Ending okayness after this wild ride? Hmph. Gimme more. You have before, Mr. Ruff, and if ever a tale deserved a slam-bang ending it's this one.
Posted by Richard at 5:13 PM