ELEVEN HOURS, a novel in which Author Pamela Erens transmutes childbirth into Art 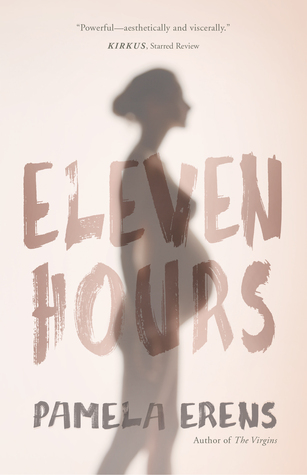 The Publisher Says: Lore arrives at the hospital alone—no husband, no partner, no friends. Her birth plan is explicit: she wants no fetal monitor, no IV, no epidural. Franckline, a nurse in the maternity ward—herself on the verge of showing—is patient with the young woman. She knows what it’s like to worry that something might go wrong, and she understands the pain when it does. She knows as well as anyone the severe challenge of childbirth, what it does to the mind and the body.

Eleven Hours is the story of two soon-to-be mothers who, in the midst of a difficult labor, are forced to reckon with their pasts and re-create their futures. Lore must disentangle herself from a love triangle; Franckline must move beyond past traumas to accept the life that’s waiting for her. Pamela Erens moves seamlessly between their begrudging friendship and the memories evoked by so intense an experience. At turns urgent and lyrical, Erens’s novel is a visceral portrait of childbirth, and a vivid rendering of the way we approach motherhood—with fear and joy, anguish and awe.

***TIN HOUSE PROVIDED ME WITH THIS BOOK AT MY REQUEST. THANK YOU***

My Review: Erens takes the reader on the difficult and painful journey that is childbirth. There’s a reason they call it labor, men.

Lore is a single mother, daughter of a single mother, and a scrappy survivor of an unenviable life … if you’re outside looking down, that is. What Lore is to herself, inside herself, is a woman making her life among strangers who are more or less well-disposed to her, if fundamentally indifferent and/or unreachable by her. It isn’t that she feels anger at the upper-class snobs who took her up on her arrival in Manhattan, even though they dropped her in the middle of a seething cauldron of emotions she has no contact with and no reason to know anything about. It’s that she is humiliated by the readiness she felt to trust, even to love, the tortured betrayers of her undernourished spirit. It took her becoming pregnant by Asa, her first friend in Manhattan’s one true love, to bring Julia’s double-dealing with Lore to light. That it wasn’t, so Julia and Asa protest, personal makes the reader’s hackles rise in outraged empathy.

How naive Lore had been, despite being the daughter of a father no one spoke of, despite the strange, incomplete conversations at her mother’s deathbed; how again and again she was caught up short by the discovery that other people had stories they didn’t tell, or told stories that weren’t entirely true. How mostly you got odd chunks torn from the whole, impossible truly to understand in their damaged form.

But here Lore is, in the midst of one of the most astounding acts imaginable, and without support. The heart bleeds! Unnecessarily, as it turns out. There is Franckline, the Haitian delivery nurse, pregnant herself but not any more sanguine about the whole idea than Lore is despite having a loving, accepting husband as the father. Her private pain surrounding motherhood goes back a long way, just like Lore’s does.

Her mother’s quiet disapproval and withdrawal was a death in itself, and Franckline’s despair at it was transmitted, she was sure of it, to the child. She transgressed twice, first by making the child, then by giving it her despair, the despair that left it unable to live.

It is the temporary, enforced partnership of these damaged and indomitable women that makes a new life seem like a good idea, not simply the end of a biological process and ultimately a burden. The hard work of birthing is followed by the damned-near-impossible task of parenting. And somehow, Pamela Erens makes that seem like a survivable job, instead of a dreadful and unending sentence. Amazing, impressive feat.

For me, however, I’m just darned good and grateful I’m not a woman, five-star prose and storytelling be hanged.
Posted by Richard at 4:45 PM