BURNING BLUE, urban fantasy with a twist & IN VERITAS, a truly dark and different take on communication 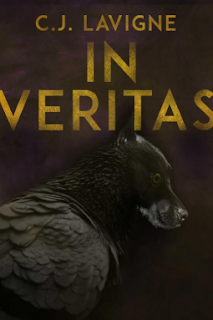 The Publisher Says: In this fantastic and fantastical debut, C.J. Lavigne concocts a wondrous realm overlaying a city that brims with civic workers and pigeons. Led by her synaesthesia, Verity Richards discovers a hidden world inside an old Ottawa theatre. Within the timeworn walls live people who should not exist—people whose very survival is threatened by science, technology, and natural law. Verity must submerge herself in this impossible reality to help save the last traces of their broken community. Her guides: a magician, his shadow-dog, a dying angel, and a knife-edged woman who is more than half ghost.

With great empathy and imagination, In Veritas explores the nature of truth and the complexities of human communication.

My Review: A novella with a fascinating conundrum at its heart: Do we ever really know what it is that others are experiencing? Can even the most earnest desire to understand someone who isn't yourself to fully get you? Now, make the head you're occupying for this story one organized differently from you. And make it impossible for those around the head to emit the usual clouds of lies we all fog up the welkin with.

Oh boy. This will be good.

Luckily it was good indeed, though very deliberate in its action. The point is that we're in a world that isn't consensus reality because of a wiring difference. Not expecting a fast-paced series of events will make this a better reading experience. Going with the lovely, lush prose will help your enjoyment build as well.

What matters all occurs in The Between. It is, and isn't, a semi-mythical rock group; it is, and isn't, a place in a theater called the McLuhan (!) that Verity (!!) reaches with the help of Santiago (!!!), whose difference is more materially oriented than Verity's. (Shadows aren't just shadows in his care.)

Each of these, um, aptly yclept entities is carefully, almost lovingly, drawn. The action isn't very exciting for the adventure seeker. This is more ayahuasca journey than meth motormouth mainline. Go with Verity, be in her head; it's not like most people's and it's such a fascinating experience to be outside the outlier for a change. I think the world Verity finds is as true and as factual as any world is. I'm also old enough to believe that consensus reality isn't, so there's that point of commonality between me and Verity. Mostly, though, go on the journey because learning how Othering works when it's your own interior processes that cause it.

What stakes the story posits are, in a word, apocalyptic. The missing fifth star I wanted to give the story lies in that mismatch of affect and effect. When the Fate of the World is on the line (with examples of what can and will happen if Verity fails) I expect to have that make things move right along, please. They don't...they can't, given the processing speeds of the main character.

But the events Verity has become integral to haven't made the single slightest sense of hurry in her. And they shouldn't. Because one thing that Verity is, like her namesake, is inexorable. Everything is put right, right enough, and there are no existential threats to Verity or the world that she has so much difficulty navigating. At her gift, the world goes on; life keeps happening; and there is no one but Verity who has all the pieces of how and why. 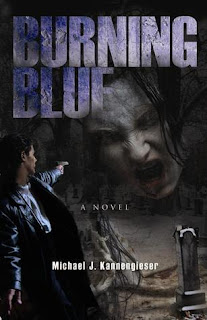 The Publisher Says: Jack Chase is a cop who betrayed his badge when he took money from a drug dealer. Only his late father's legacy as a department chaplain might prevent him from being prosecuted. When Jack is shot in the line of duty, he has a near-death experience. What he does not see, however, are deceased loved ones or Pearly Gates - he goes to Hell.

When Jack awakens, the woman he loves, Terry, discovers his crime and leaves him. Jack is haunted by images of Hell and demons taunt him in both his dreams and while he is awake. He knows from his father's sermons that redemption is the only way to escape damnation, but he is afraid to confess his sins or go to jail. Not only must he escape the nightmarish images that haunt him, he must make Terry trust him again and bring her back.

Jack's friend, Danny, devises a plan to help him avoid jail and hide from the drug dealers that are looking for him. In this thrilling story, Jack fights to save his life, redeem his soul, and reunite with the love of his life.

My Review: I wonder why there are so few urban fantasy tales set on the edge of Damnation? Especially featuring law enforcement personnel. The opportunities to lose your moral compass are not inconsiderable...well, here's one for you. I'll say this, though, you'll be seeking it out for quite some time as it's been allowed to go out of print for some reason.

What works in this story is that set-up. It's not common, and it's got the charm of being sincerely presented. It's not in the least in doubt that the consequences Jack sees for himself are, in fact, real and really terrifying. I would've been aware of the quirked eyebrow or smothered smirk of the unbeliever, being one of those; the author apparently is not like me.

What this short, but quite deliberately paced, novella offers is a fascinating look at what someone who's been scared straight, so to speak, will set himself to do in order to make himself over into a better person than the one he's lazily allowed himself to become. That he does so to win back a woman is, I suppose, to be expected but rather doesn't work in the 2020s. Makes a person into a reward, a thing.