FEN, BOG and SWAMP: A Short History of Peatland Destruction and Its Role in the Climate Crisis, short not sweet & RUNAWAY: Notes on the Myths That Made Me, memoir that missed its moment 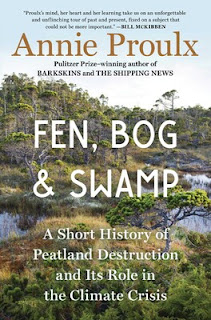 FEN, BOG and SWAMP: A Short History of Peatland Destruction and Its Role in the Climate Crisis
ANNIE PROULX
Scribner
$26.99 hardcover, available now

The Publisher Says: From Pulitzer Prize winner Annie Proulx—whose novels are infused with her knowledge and deep concern for the earth—comes a riveting, revelatory history of our wetlands, their ecological role, and what their systematic destruction means for the planet.

A lifelong environmentalist, Annie Proulx brings her wide-ranging research and scholarship to the subject of wetlands and the vitally important yet little understood role they play in preserving the environment—by storing the carbon emissions that greatly contribute to climate change. Fens, bogs, swamps, and marine estuaries are the earth’s most desirable and dependable resources, and in four stunning parts, Proulx documents the long-misunderstood role of these wetlands in saving the planet.

Taking us on a fascinating journey through history, Proulx shows us the fens of 16th-century England to Canada’s Hudson Bay lowlands, Russia’s Great Vasyugan Mire, America’s Okeefenokee National Wildlife Refuge, and the 19th-century explorers who began the destruction of the Amazon rainforest. Along the way, she writes of the diseases spawned in the wetlands—the Ague, malaria, Marsh Fever—and the surprisingly significant role of peat in industrialization.

A sobering look at the degradation of wetlands over centuries and the serious ecological consequences, this is a stunningly important work and a rousing call to action by a writer whose passionate devotion to understanding and preserving the environment is on full and glorious display.

My Review: First things first: Those title words aren't synonyms, exactly, so much as a family tree of naturally occurring wet places on Earth.

This information is important to fully understanding the scale and cost of wetland losses we've inflicted on the planet. Author Proulx (whose use of "yclept" in this book I note here with a big smile, as it's a favorite underused word of mine) is an experienced campaigner when it comes to putting English through its paces to evoke a sense of place and a perception of mood:


The fen people of all periods knew the still water, infinite moods of cloud. They lived in reflections and moving reed shadows, poled through curtains of rain, gazed at the layered horizon, at curling waves that pummeled the land edge in storms.
–and–
It can take ten thousand years for a bog to convert to peat but in only a few weeks a human on a peat cutter machine can strip a large area down to the primordial gravel.

Nothing made by human minds is ever perfect. I'm glad the title gave Author Proulx, eighty-six at this writing, an opportunity to mourn publicly the fens of her Connecticut childhood. I was fascinated by the information about the vanished English fens. But the bogs came in for a cursory examination in comparison, seen mostly through the lens of bog bodies. I acknowledge the personal element of the fact that they're bodies probably gave more heft to the science of peat bogs that really needed to be presented. I found it a distraction, though, while others may think of it as an enhancement.

It is with the swamps and bayous of my erstwhile stomping grounds, Southern Texas and its adjacent lowlands, that the short shrift became apparent. Houston and its urban sprawl could, and should, form a book of damning indictments of greed and stupidity. New Orleans was, for reasons I simply can't understand, rescued as a human habitation after the death of the many bayous and wetlands south of it resulted in its near destruction...an expensive playground for rich people. Another book that should be written (again).

But take away from any read the best, accept that not all of it was made with your taste in mind, and Author Proulx's essential message shines a harsh lime-light onto the instrumentalist Judeo-Christian worldview that's landed us in this awful mess:


The attitude of looking at nature solely as something to be exploited—without cooperative thanks or appeasing sacrifices—is ingrained in western cultures.

Our addiction to Being Right, to understanding the uses but not the purposes of this, our one and only planet, is killing us. And the death sentence has fallen on our generation. Lucky, lucky us we have Author Proulx to bear witness: "The waters tremble at our chutzpah and it seems we will not change." 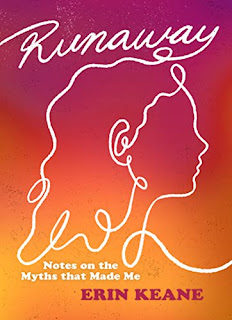 RUNAWAY: Notes on the Myths That Made Me
ERIN KEANE
Belt Publishing
$29.00 hardcover, available now

Rating: 4* of five, all for the startlingly apt and pointed phrases about her mother

The Publisher Says: From Erin Keane, editor in chief at Salon, comes a touching memoir about the search for truths in the stories families tell.

In 1970, Erin Keane’s mother ran away from home for the first time. She was thirteen years old. Over the next several years, and under two assumed identities, she hitchhiked her way across America, experiencing freedom, hardship, and tragedy. At fifteen, she met a man in New York City and married him. He was thirty-six.

Though a deft balance of journalistic digging, cultural criticism, and poetic reimagining, Keane pieces together the true story of her mother’s teenage years, questioning almost everything she’s been told about her parents and their relationship. Along the way, she also considers how pop culture has kept similar narratives alive in her. At stake are some of the most profound questions we can ask ourselves: What’s true? What gets remembered? Who gets to tell the stories that make us who we are?

Whether it’s talking about painful family history, #MeToo, Star Wars, true crime forensics, or The Gilmore Girls, Runaway is an unforgettable look at all the different ways the stories we tell—both personal and pop cultural—create us.

My Review: Memories are, by definition, the things that form us, the things we re-member our selves from. A memoir descends to us from French, mémoire, which can mean:

...as well as the sense Anglophones use it in; it's a word, in other words, for lots of things that mean "parts of a whole thing, or place to put those parts." Memories are like that, bits of a whole thing that often, when reassembled, aren't the thing itself. We can bless the French for allowing us the use of this multi-warheaded weapon of a word for reifying the brain's peculiar technology of making meaning from the electromagnetic stew we all swim in. Some of us more successfully than others, as Author Keane's researches into her family have vividly taught her.

Had Author Keane's memoir, in any of those senses, of her life in pop-cultural mythic tones appeared two or even three years ago, it would be a triumph. As it is, it's a beautifully written memoir in the "store" or "report" sense, in the "place I've put fragments and pieces of things I want to remember and keep in some meaningful context." What it isn't is a successful book.

You can take it from me that the author's chops as a phrase-smith are solid, impeccably pointed sentences darted into the hides of slow-moving shambolic man-things that ruined the lives of her mother, then her, with their thoughtless trampling solipsism. It's not the least bit arguable that this is a writer, and a journalist, of talent and training, of tenacity and fascinating insight.

When she's talking about her mother, and her seriously screwed-up life.

When she tries to connect this with her pop-culture fascinations, clearly re-evaluated in adulthood after #MeToo blew the blinders off the unwilling-to-see and forced them to look, look, at the cost their pretty little fantasy exacted. On everyone, really, since a damaged person does damage, too; but inarguably on women the most tellingly, the most vilely.

What I can't make work in reading the piercingly honest redefinition of the author's life is why the John Ford/Woody Allen/et alii men are there. Yes, we know, they were ghastly people and treated women as playthings, they baked that attitude into their art, but...we know this. It's part of your mental furniture? Mine too. I swallowed it whole (though I never warmed to Woody Allen, too nebbishy for me). So did a few billion others. But you're talking about these men as though the betrayal of trust is fresh, without telling me why it *is* fresh for you, or putting into a time-context that would explain your palpable sense of betrayal.

Some wounds aren't best explored too often because the sympathy of the audience goes from victim to monster. This is a tipping point to be avoided at all costs with the #MeToo men. Keep beating the drum, and it will reverberate on you more strongly than the intended audience.

Anyway...very much a book of halves, one half excellent and the other...not.