MISS ICELAND, exploring the reality of how much society has changed ***SPOILERS*** 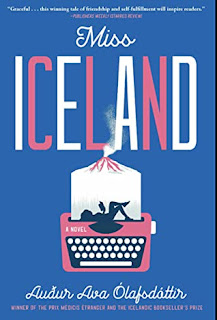 The Publisher Says: Iceland in the 1960s. Hekla is a budding female novelist who was born in the remote district of Dalir. After packing her few belongings, including James Joyces's Ulysses and a Remington typewriter, she heads for Reykjavik with a manuscript buried in her bags. There, she intends to become a writer. Sharing an apartment with her childhood and queer friend Jón John, Hekla comes to learn that she will have to stand alone in a small male dominated community that would rather see her win a pageant than be a professional artist. As the two friends find themselves increasingly on the outside, their bond shapes and strengthens them artistically in the most moving of ways.

My Review: It's always been true that, to be a success, a woman must do twice as much and can expect half the reward a man would get for the same labor. Hekla, cursed with both attractiveness and intelligence in a smugly patriarchal culture, learns that to be a writer who is taken seriously while also being a pretty female is a Sisyphean task. The 1960s were not yet times of change in Iceland....

Hekla's ambitions lure her away from her rural home and, when she arrives in Reykjavík, her efforts are...Herculean. Yes, lots of mythology referred to here, and honestly it's only down to the fact that there isn't a better metaphor for what she is required to expend. Jón John, her gay BFF, preceded her to Reykjavík because if there's a worse thing to be in rural Iceland than a smart, ambitious, pretty woman, it's a queer man. They take up residence together while he does the kind of labor he can find, gets laid when someone's horny and their wife isn't willing, and ponders with her why they should be reduced to such crummy exigencies for getting mere crumbs of what they really want.

I was ready to give the book five stars until I got to the ending. What happened there, I fear, was me smacking my nose on the sad, true realization that Jón John's deeply ingrained homophobia will, in fact, be the death of him; and that Hekla, in accepting a very terrible and unfair life for herself, has resigned herself to the way the world is. Is this how the book should end? Yes, I can certainly see that it would make the most sense for it to end as it has. I still wanted, on an emotional level, to feel the striving I'd seen the characters enact pay off. I expected Surtsey to come roaring up faster than it did and give the characters new, hot, fire-powered land to live their new, hot, fire-powered lives on.


“Men are born poets. By the time of their confirmation, they’ve taken on the inescapable role of being geniuses. It doesn’t matter whether they write books or not. Women, on the other hand, grapple with puberty and have babies, which prevents them from being able to write.”

No, not for humans as fully, honestly drawn as these humans were, to be given a fairy-tale ending. They got reality. It felt like a cheat; it wasn't, of course, but it felt like one. I will say that the emotional core of the book is sadness and that was not the source of my half-star docking. It was the changes Jón John and Hekla made not amounting to an improvement of their lives. It could have; it seemed to me that, once the Faustian bargain of marriage was struck between them, they could've used that energy to propel themselves to happier endings. But the core of sadness was too powerful. The end of the story is, in this book, really and truly an end. Hekla's book being published? A major achievement! And it's all her ex-boyfriend Starkadur's because otherwise, without his man's name on it, the book won't *get* published. Miss Iceland was beautifully, poignantly sad all the way through. But when a story has one note, it's hard to maintain one's taste for that, and only that, note.


The skylight has misted up in the night, a white patina of snow has formed on the windowsill. I drape {Starkadur}'s sweater over me, move into the kitchen to get a cloth to wipe it up. A trail of sleet streams down the glass, I traced it with my finger. Apart from the squawk of seagulls, a desolate stillness reigns over Skolavordustigur.

Understand your journey, don't undertake it if you're not in the mood for exactly that journey. If you are, this will repay your attention with exquisitely lovely, painfully honest images and you'll be honestly unable to see for sad tears that won't quite fall.