MY BROTHER: A Novel, Scandinavian grimdark not-fantasy with a sting in its tail 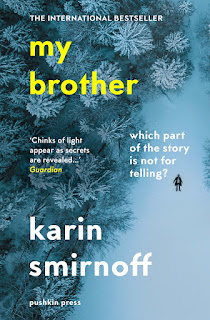 The Publisher Says: A Swedish publishing phenomenon: a literary noir of extraordinary power follows the discovery of a young woman’s body in the long grass behind the sawmill...

Which part of the story is not for telling?

Jana Kippo has returned to Smalånger to see her twin brother, Bror, still living in the small family farmhouse in the remote north of Sweden.

Within the isolated community, secrets and lies have grown silently, undisturbed for years.

Following the discovery of a young woman's body in the long grass behind the sawmill, the siblings, hooked by a childhood steeped in darkness, need to break free.

But the truth cannot be found in other people's stories. The question is: can it be found anywhere?


We were born just a few minutes apart and are alike in many ways. Especially in how we look. We are thin and gingery, with straggly unpigmented hair. We are so bleakly unremarkable that nobody used to remember either of us as somebody. Only as the twins.

So the police were looking into her death I said.
Of course they did. What did you expect. A dead woman found in the grass near the sawmill and it turns out she has slept with most of the married men in the village. And a number of others as well. On top of that one of the suspects is a convicted murderer.
Who I asked. Me of course he said.

You're now familiar with the author's voice in this, the first of three novels set it the Arctic Swedish town of Smalånger, where Bror and Jana are from...Jana has left...Bror hasn't bothered, he can drink himself to death in the comfort of what was the family's home. With, now, the company of his twin, as she chooses to come back to, to, help? Anyway, bear witness if not accelerate the crash. To keep herself in food (Bror worries about booze, nothing else) she starts working for the local social services department, which she calls smalångerhomecareservices, thus making herself useful while getting fully up on the local gossip from the people she works with and the ones she's helping to survive whatever time is left to them in a modicum of physical comfort. No one in Smalånger lives in psychic comfort, she discovers early, and often.

My idea of what I was in for was too weak-kneed. I thought I'd get something dark, but not my-eyes-my-poor-eyes dark! A woman suffers a dreadful childhood; returns to the scene of the crime to be there with the brother ("Bror" is Swedish for "brother"; unlike Jana, he has no personal name) whose life was stalled, stopped, and never had any particular reason to start it again. He drifts aimlessley, but reasonably harmlessly...yes, he sleeps with his best friend's wife, but it's not like he was the only one who did; he's drinking himself to death, sure, but when the woman he loved but who was murdered by person or persons unknown, what else is there to do except hang out with her widower and drink?

No, not chuckle one in this book. But there are two more in Swedish and I need to read them now!

What the heck? I need to read them? Yes, while I wouldn't have predicted that I'd get invested in this Nordic grimdark saga of terrible, sad, claustrophobic life in a tiny, remote, and dark (physically) place, that is exactly what happened. What more there is to learn I want to learn it.

It's that kind of a read, y'all. You won't leave the same as you entered.