THE JUAN PABLO VILLALOBOS PAGE: I DON'T EXPECT ANYONE TO BELIEVE ME; QUESADILLAS; INVASION OF THE SPIRIT PEOPLE 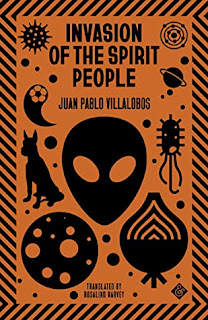 The Publisher Says: Juan Pablo Villalobos’s fifth novel adopts a gentle, fable-like tone, approaching the problem of racism from the perspective that any position as idiotic as xenophobia can only be fought with sheer absurdity.

In an unnamed city, colonised by an unnamed world power, an immigrant named Gastón makes his living selling exotic vegetables to eateries around the city. He has a dog called Kitten, who’s been diagnosed with terminal cancer, and a good friend called Max, who’s in a deep depression after being forced to close his restaurant. Meanwhile, Max’s son, Pol, a scientist away on a scientific expedition into the Arctic, can offer little support.

Faced with these dispiriting problems, Gastón begins a quest, or rather three: he must search for someone to put his dog to sleep humanely; he must find a space in which to open a new restaurant with Max; and he must look into the truth behind the news being sent back by Pol: that human life may be the by-product of an ancient alien attempt at colonisation . . . and that those aliens might intend to make a return visit.

My Review: Alien invasion! Gastón's shared son, Pol, is freaking right out (wouldn't we all!) as he tries to get through Max, his depressed father's, fog to...to what? Gastón, his other father, isn't quite sure what to do about Max's decline into dissociation from his failing business and crumbling participation with the world. But is Gastón sure he believes Pol? Aliens from space made us humans what we are?

Add to the stress of trying to prop up Max, comprehend the influx of aliens from Earth (...or are they...?) and what that means for his and Max's attempts to survive as feeders of the people via growing and cooking food, his quest to find someone he trusts to give Kitten (his aging, ill dog) a good death. This is entirely a story of the humanity of all people, regardless of where they come from or how they define themselves.

A casual reader might see the Asian stereotyping, with mentions of slanting eyes etc etc as endorsing this world-view. I don't think that is accurate, or fair. It seems to me that every step of the story's progress is made in the harsh light of Judgment. No one here, from Gastón (whose exploits we're following closely, as the third-person narrator advises us early on) on down, is spared an unflattering shadow.

As is the norm for Author Villalobos, there is stuff to shock and offend those prone to such histrionics. Avoid the read, then, if you're not prepared to look closely at your own responses to the events unfolding here. I myownself think it's another, less raucous but more reflective, take-down of the structures and maintainers of Power as it's used in the twenty-first century end-stage capitalist world. 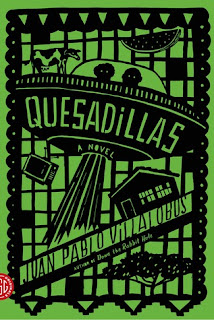 The Publisher Says: It’s the eighties in Lagos de Moreno—a town where there are more cows than people, and more priests than cows—and a poor family struggles to overcome the bizarre dangers of living in Mexico. The father, a high school civics teacher, insists on practicing and teaching the art of the insult, while the mother prepares hundreds of quesadillas to serve to their numerous progeny: Aristotle, Orestes, Archilochus, Callimachus, Electra, Castor, and Pollux. Confined to their home, the family bears witness to the revolt against the Institutional Revolutionary Party and their umpteenth electoral fraud. This political upheaval is only the beginning of son Orestes’s adventures and his uproarious crusade against the boredom of rustic life and the tyranny of his older brother.

My Review: I do not think there is another author alive who can make such a painfully, angrily critical book about inequality so damned funny. Foul-mouthed Oreste blasts your wimpy Norteño eyes with some deeply "offensive" cursing, swearing, and blasphemy.

You need to be warned, though, lest you fall into one of those performative swoons that are so absurd and typical of the US readers. Lots and lots and lots of pearl-clutching fun to be had, of course, howling about your delicate sensibilities! But you can't claim to be blindsided. I'm telling you clearly, now, before you pick it up, that this teenager's mouth is not going to sound good to you.

To me, it was a welcome return to honest, gut-deep youthful outrage at the hideous, genuinely offensive to proper sensibility calibration, social crimes and thefts. Nothing in this flensingly honest shout of outrage should shock you more than the cruelty, the sheer shocking indifference, of the economic elites.

I encourage the easily-offended pearl-clutching fools to read it because it will offend them. They need offending. 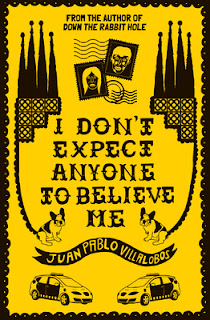 I DON'T EXPECT ANYONE TO BELIEVE ME
JUAN PABLO VILLALOBOS (tr. Daniel Hahn)
And Other Stories
$17.95 trade paper, available now

The Publisher Says: The author of Down the Rabbit Hole delivers a hilarious and prize-winning tale of immigrants, students and gangsters in Barcelona

“I don’t expect anyone to believe me,” warns the narrator of this novel, a Mexican student called Juan Pablo Villalobos. He is about to fly to Barcelona on a scholarship, when he’s kidnapped in a bookshop and whisked away by thugs to a basement. The gangsters are threatening his cousin – a wannabe entrepreneur known to some as “Projects” and to others as “dickhead” – who is gagged and tied to a chair. The thugs say Juan Pablo must work for them. His mission? To bring Laia, a Mexican student in Barcelona and the daughter of a corrupt politician, to fall in love with him. He accepts, albeit unwillingly, and albeit after the crime boss has forced him at gunpoint into a discussion on the limits of humour in literature.

Part campus novel, part gangster thriller, I Don’t Expect Anyone to Believe Me is Villalobos at his best, exuberantly foul-mouthed and intellectually agile. This hugely entertaining novel, the winner of Spain’s prestigious Herralde Prize, makes light work of difficult subjects – immigration, corruption, family loyalty and love – in a story where the bad guys aren’t as expected…and nor is anyone else.

My Review: I did not know how I was going to review this latest satirical, bitter-as-bile delight from Juan Pablo Villalobos. Now I not only don't have to review it, I wouldn't dare. Robert Rea of estimable literary magazine The Southwest Review has already done everything I wanted to do, only he did it better. You can't see me, but I am vibrating with a Day-Glo orange jealous ragey hatred after reading that...that....

If you liked THE SAVAGE DETECTIVES by Roberto Bolaño (here unsubtly parodied and lovingly honored), or any of Villalobos's previous books (QUESADILLAS {review above} or DOWN THE RABBIT HOLE for example), you should rush to the Kindle and download this gem or get the paperbook from your favorite bookery. Wherever you source it, y'all literary readers will most likely never feel a moment's regret that you read it.