KRAKEN CALLING, best be sure to pick up *now* 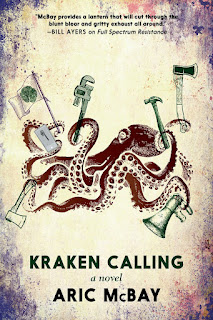 The Publisher Says: A sweeping near future dystopic fantasy in the Octavia Butlerian vein of the Parable of the Sower novels.

Political activist and anarchist author Aric McBay (Full Spectrum Resistance) toggles between the years 2028 and 2051 to give us the experience, with breathtaking realism, of what might happen in the span of just one generation to a society that is already on the brink of collapse.

In 2028 environmental activists hesitate to take the fight to the extreme of violent revolution. Twenty years later, with the natural environment now seriously degraded, the revolution is brought to the activists, rather than the other way around, by an authoritarian government willing to resort to violence, willing to let the majority suffer from hunger and poverty, in order to control its citizens when the government can no longer provide them with a decent quality of life.

So it is the activists who must defend their communities, their neighbors, through a more humane and in some ways more conservative status quo of care and moderation.

My Review: Non-fiction writer (Peak Oil Survival, Deep Green Resistance) Aric McBay makes his points in fictional form. What he has done is not the usual thing for him, analyzing and contextualizing social and political trends for a left-leaning audience; this has always been his forte as a writer.

I think it still is. This novel makes a very trenchant attempt to put human skin on the bones of social movements for change, favoring equitable and reasonable restructuring of our self-evidently unsustainable lives.


“It’s always hard to tell, isn’t it? How the future could change from the smallest actions,“ Simón mused. “I believe we made things better. We bought time. Breathing room. We stopped one more. We didn’t improve things as dramatically as we hoped. But we made room for a hundred other movements to flower. Some of them failed, but some of them are amazing....”

“The tides always rise and fall for us,”Simón said. “That’s the nature of struggle. There is no guarantee, no permanent victory.”

“The work of the revolutionary is to plow the sea,” Addy quoted.”

It is indeed, Addy. It is indeed. To see your best efforts subsumed under the heaving mass of humanity in its indifference and fearful rejection of change. To know you're not ever going to prevail, no matter how many times you win. But to be sure you're harrowing the surfaces of the waters plowed and allowing things buried to come to the surface? It's a reward beyond price.

Dystopia, then, is inevitable? I don't think it is, though a lot depends on the individual's concept of "dystopia" and their tolerance for ambiguity. Most revolutionaries are absolutists, and should be kept far, far away from the levers of power. We're seeing that in the House of Representatives in the US during 2022. Revolution is hard, and requires people to be very, very hard...and these revolutionaries are obdurate, but brittle.

This means that, like Evelyn in our near-term future (2028), we need to be sure to combat that obduracy effectively. Or the 2051 sections of the story won't be a warning klaxon but a sad prediction.