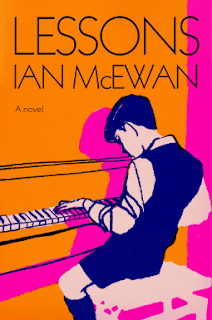 The Publisher Says: From the best-selling author of Atonement and Saturday comes the epic and intimate story of one man's life across generations and historical upheavals. From the Suez Crisis to the Cuban Missile Crisis, the fall of the Berlin Wall to the current pandemic, Roland Baines sometimes rides with the tide of history, but more often struggles against it.

When the world is still counting the cost of the Second World War and the Iron Curtain has closed, eleven-year-old Roland Baines's life is turned upside down. Two thousand miles from his mother's protective love, stranded at an unusual boarding school, his vulnerability attracts piano teacher Miss Miriam Cornell, leaving scars as well as a memory of love that will never fade.

Now, when his wife vanishes, leaving him alone with his tiny son, Roland is forced to confront the reality of his restless existence. As the radiation from Chernobyl spreads across Europe, he begins a search for answers that looks deep into his family history and will last for the rest of his life.

Haunted by lost opportunities, Roland seeks solace through every possible means—music, literature, friends, sex, politics, and, finally, love cut tragically short, then love ultimately redeemed. His journey raises important questions for us all. Can we take full charge of the course of our lives without causing damage to others? How do global events beyond our control shape our lives and our memories? And what can we really learn from the traumas of the past?

Epic, mesmerizing, and deeply humane, Lessons is a chronicle for our times—a powerful meditation on history and humanity through the prism of one man's lifetime.

My Review: Sometimes gambling on a less-than-loved writer's work, when it's a story one really resonates with, pays off; other times, not so much. This experience, after my deep dislike of Solar and Atonement yet genuine appreciation for The Children Act, split the difference.

It's not news to regulars here that I was sexually abused by my ephebeophile mother when young. Quite recently I read The Kingdoms, an alternate history novel by Natasha Pulley, which contained a truly astonishing scene of unwanted intimacy between a man (the victim) and his wife (the violator) that, for the very first time ever in my experience of reading, contained the truth of coercive heterosex where the man's the coerced partner. It was...healing...for me to see that on the page. It gave me the inner resources to request this book back in June.

Lessons is out now, and I recommend it to you as a good, solid novel of reckoning with emotional damage across a lifetime.

What about that equivocal waffle above? Well. Now. Author McEwan hasn't suddenly burst forth from a chrysalis and become a wildly passionate and gloriously sensuous prose stylist. He's still a man of his age and class. He's not built for flights of fancy or even particularly emotionally available prose stylings. It's one of the main reasons I haven't become a fanboy of his. But, and this is where I sound weird to my own inner ears, when there's a story to tell that *needs* to be kept buttoned up, he's the writer to do it. That was completely evident in The Children Act, another flat and affectless person's attempt to contextualize the wildly ungovernable emotions of others as they rampage through her (in that case) carefully designed lifestyle. It's the technique that was needed to tell this story and, blessedly, Author McEwan used it.

What happens to young Roland isn't all that unusual. I know we, as a culture, like to think men are perpetrators and women are victims, but this has never been true. It's time we faced up to it in the post-#MeToo moments. It isn't at all surprising to me that the pace of this story varies as much as it does. The youthful disasters are the ones that set the stage, often act as the pattern, for the hurts and buffets of the future. The manner of Author McEwan's telling of the different stories was quite clearly meant to reflect this. Where something happens for the first time, it is given narrative weight; when it comes around again, it gets less of it. I approve, if that needs saying, of this strategy.

No one is immune to the stresses and strains of The World as it runs amok and periodically threatens to kill us all. This life, Roland's years on this planet, contains all of my own years on it. I was at different stages of life than Roland, of course, being two decades younger; but the fact is I was formed by the same things Roland was. It felt to me as though Roland trudged and slogged a lot of his life away. Given the emotional damage he carries with him, that was perfectly logical to me. It wasn't, however, a chucklefest. When you're going to take me on a five hundred-plus page trip inside one man's skull, I as a reader would like some lightening of the shadows, say with humor. Author McEwan doesn't offer that to us; this is something to be aware of in deciding whether you'd like to read the book.

Many other early readers seem to have a problem with Alissa, the wife who abandons Roland with their infant son to become a writer. I'm entirely unsure what the heck the problem they have with that subplot is. It's not like it can't happen, since it's something Doris Lessing (eg) actually did. I myownself wasn't in the least surprised that Roland would marry someone who could calmly walk away from messy emotional realities in order to serve her own needs. Like calls to like, after all.

The one moment I felt Author McEwan really rather overplayed his emotionless hand had to do with the Chernobyl disaster...it felt, in its handling, like something was finally just off in the manner of his weaving the event into the story. But honestly, as said above, this book is telling a story about the reverberations of an emotional cripple's awkward flailings, and nobody I can think of could do it better than Ian McEwan has done.