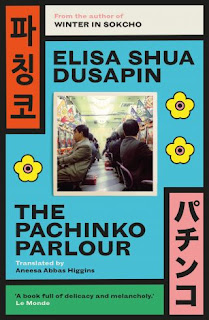 The Publisher Says: The days are beginning to draw in. The sky is dark by seven in the evening. I lie on the floor and gaze out of the window. Women’s calves, men’s shoes, heels trodden down by the weight of bodies borne for too long.

It is summer in Tokyo. Claire finds herself dividing her time between tutoring twelve-year-old Mieko, in an apartment in an abandoned hotel, and lying on the floor at her grandparents: daydreaming, playing Tetris and listening to the sounds from the street above. The heat rises; the days slip by.

The plan is for Claire to visit Korea with her grandparents. They fled the civil war there over fifty years ago, along with thousands of others, and haven’t been back since. When they first arrived in Japan, they opened Shiny, a pachinko parlor. Shiny is still open, drawing people in with its bright, flashing lights and promises of good fortune. And as Mieko and Claire gradually bond, a tender relationship growing, Mieko’s determination to visit the pachinko parlor builds.

The Pachinko Parlor is a nuanced and beguiling exploration of identity and otherness, unspoken histories, and the loneliness you can feel amongst family. Crisp and enigmatic, Shua Dusapin’s writing glows with intelligence.

My Review: I'm aware of two things about this read, two very strong responses that wouldn't be elicited by any other read I've encountered this year: 1) Food looms very, very large in my experience of a story. This book, it's Claire and her inability to enjoy any food she encounters in Japan. 2) Author Shua Dusapin builds very intricate clockworks of interdependent imagery to support her stories of women without pleasure in the worlds they're in. The recurring fish-object images in this book join Winter in Sokcho's cold, echoing spaces. I mean, when a child's desire to act on the world is performed in explicit imitation of a cleaner fish, and a train pulling into a station summons from its immensity and speed the idea of a fish in Claire, our main character, then the author's going about her business with a degree of bravura that demands to be noted. As to whether it worked, I cannot say. I noticed it...I never thought of not noticing it...but derived nothing but the most facile conclusions from its obviousness. Me, or the choice? A case is readily made for either.

Claire's visit to her Korean grandparents, whose lives have taken them to batten on the economic lifeblood of their erstwhile colonizers, is always...off. Claire has little knowledge of Korean to offer in her attempts to connect with them. None of them deign to speak Japanese among themselves. So, to skirt around the grandparental reticence with their native language (a reticence they did not demonstrate with Claire's Swiss boyfriend, she notes) and still manage to communicate, they use English. Another colonial tongue...one associated in Korea with the US...another occupying power, though perhaps more palatable (!) because it's used by the Japanese's modern overlords.

Pachinko earns profits for her Korean grandparents...the only legal way for Japanese to gamble, or Koreans to earn...Japan making an apology for its colonial past? Or simply making it obvious who the vampires sucking the country's vice income into themselves are. Both...either...not for nothing is Japan's food disagreeable to Claire. Its artifice (a description of a raspberry atop a dessert was so revolting I had to put the book down:


I look down at my tart. A single raspberry glistens atop a lump of whipped cream. Compact and rubbery-looking. I pick up my knife, cut the tart into sections and start eating. It tastes fatty. I spit it out into my napkin. The raspberry stares up at me, still intact, coated in a film of jelly.

...it made something lush and luscious sound so unheathily slimy!) is removed from nature, is devoid of dirt or even signs of human hands in its preparation...something very Japanese about that. And Claire's not having it inside her, not willingly anyway.

Mieko serves as Claire's out, her means of contributing something to this life she's temporarily trapped in (it's a visit, not an emigration!) and unhappily isolated within. Mieko is a young Japanese girl whose mother hires Claire to teach French. (Which is odd, given the mother's fluency...permaybehaps seeking a genuinely French accent? from a Swiss Korean?) Mieko's, um, a little odd. Her ordinary-kid desires, eg going to theme parks or eating, are all as not-Japanese as is Claire's role in her life of teaching her a European language. Mieko is for Claire, unsurprisingly, the friend whose strangeness meets one's own in silent weirdo communion.

Claire's main failing as a character is simply that she is so passive. She drifts, she causes nothing to happen...teaching Mieko French and acting as her escort to theme parks aren't things Claire causes or even proposes...and, in the end, her presence changes nothing. The grandparents she's there to visit aren't communicative, make no demands and accept no role in the granddaughter who came around the world to enable a much-mooted visit to Korea for them's life while she's there. The visit itself, a "return" to a country that the grandparents left before there was a North or a South or an American- or Chinese-backed state, is...inconclusive. Did it happen? We aren't vouchsafed that information...Claire's climbing a gangway, thinking her grandparents are behind her...and they aren't.

What makes me not-best-pleased about that ending, that tunnel Claire's climbing to visit a place she's not been to, she's there to allow others to experience before they die...is the fact that it does nothing like an ending to resolve the family's generational hurts. It's a story about a disintegrating family's stop at a roadside attraction on its way somewhere and suddenly the stop's over but not everyone's in the car.

It is, in other words, a bit too much like Winter in Sokcho to be ignored. That tale's very French-feeling plot of plotlessness as families unite around the goal of making everyone feel as miserable as possible worked because it was the author's introduction to the Anglophone reading world. It's no less beautifully wrapped in sentences here, the imagery is lovely, but...it's not my first trip to the well.

I am glad I read this story. I am eager to see what else the author has in mind for me to read in future. I hope it will ring more than a change of scenery on the story next time. Once was enough; twice a bit troublesome; no more now, if you please.