IF I SURVIVE YOU, available today so RUN! Get you one! 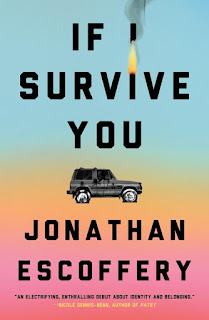 The Publisher Says: A major debut, blazing with style and heart, that follows a Jamaican family striving for more in Miami, and introduces a generational storyteller.

In the 1970s, Topper and Sanya flee to Miami as political violence consumes their native Kingston. But America, as the couple and their two children learn, is far from the promised land. Excluded from society as Black immigrants, the family pushes on through Hurricane Andrew and later the 2008 recession, living in a house so cursed that the pet fish launches itself out of its own tank rather than stay. But even as things fall apart, the family remains motivated, often to its own detriment, by what their younger son, Trelawny, calls “the exquisite, racking compulsion to survive.”

Masterfully constructed with heart and humor, the linked stories in Jonathan Escoffery’s If I Survive You center on Trelawny as he struggles to carve out a place for himself amid financial disaster, racism, and flat-out bad luck. After a fight with Topper—himself reckoning with his failures as a parent and his longing for Jamaica—Trelawny claws his way out of homelessness through a series of odd, often hilarious jobs. Meanwhile, his brother, Delano, attempts a disastrous cash grab to get his kids back, and his cousin, Cukie, looks for a father who doesn’t want to be found. As each character searches for a foothold, they never forget the profound danger of climbing without a safety net.

Pulsing with vibrant lyricism and inimitable style, sly commentary and contagious laughter, Escoffery’s debut unravels what it means to be in between homes and cultures in a world at the mercy of capitalism and whiteness. With If I Survive You, Escoffery announces himself as a prodigious storyteller in a class of his own, a chronicler of American life at its most gruesome and hopeful.

My Review: When I think about braided-stories novels, there's always a little frisson of fear in my response. I don't always think it's the best idea to try to make a novel out of things that don't fit together naturally. If there's an organic flow among stories, what stops the author from making it into a regular novel-style novel? Why this technique, not another that doesn't make The Market shudder deep in its bones? All we ever hear is that stories are hard to sell, collections are death in the stores, writing stories is just as hard as writing novels but even less remunerative. I'm inured to this cant of can't by now. It's done its damage. I look askance at connected collections.

What, then, is the reason I decided to read this iteration of the story-novel? There's no one thing, there's a constellation of tweaks and trips. I find the idea of books others can't "understand" tempting. I am all for creative uses of the many kinds of English out there waiting to make my acquaintance. I'll walk a mile for a good story about people who just...can't...because they're my people. Because whatever else divides us, we have one thing in common: We don't Belong, and others do. That's worth a lot of effort...which, for the record, I did not think was needed in reading this book. The second story is in patwa but the rest? Not a bit of it.

It pleases me to use my time-honored technique called the Bryce Method to explicate the wonders herein to feast upon.

In Flux is, like so many of these stories, told in the Satanic Second Person, that chest-pokey "you" that's so often a shortcut to getting the reader's defenses down and their sympathy engaged for the object of the story. It can be overused, but this is a short story and it's about seeking identity starting in 1980s Miami (of all the schizophrenic places!) so it's perfectly appropriate. Right down to the chest-pokeyness. It's a meditation on the condition of being Other, it's a jeremiad against the idiocy of American skin-color-itis, it's a serious look at how being in the liminal spaces refuses to be an identity while defining your every move, action, and thought.


You've been thinking about your mother's list of European grands and how your parents still speak so highly of the British school system that educated them, pre-Independence, and you think of all the Rastafarians who extol Ethiopia and Mama Africa. But what you want to know is contemporary middle-class twentysomethings. You want to know how you might feel had your family never left.

What does it mean to be me? isn't fresh ground to till, but it's an evergreen for a reason. We all need an "against" to find our own "for" side. (Trelawney even has a college-time brush with a gay man, *gasp*) I am, therefore I think about this. Where Trelawney ends up, he began...like all the rest of us, really. 4 stars despite the sore chest from the poking

Under the Ackee Tree I have heard others say this is where they got off the train. I found the shift into a mild version of Jamaican English (many Caribbean folk work where I live, I've heard the real unAmericanized version) welcome. Topper's a man whose life wasn't what he wanted or expected. He's no better, no worse than any other man of our generation, just a bog-standard Boomer.


You go out to the patio and wonder why everyone is turned around in them chairs, peering off into the dark, but it then you hear it: loud grunt and dull thud. And you see Trelawney' silhouette under the ackee tree, all with ax in him hands. And him talking to himself now. And him swinging the ax. ... And you wonder if it's you must be defective since you ruin everyone.

It rang true, this exploration about identity that can't ever really be escaped. I felt Topper's uneasy rage, his angry inability to see past his own ideas. He's one of the billions of people who just...stopped. Them whose worlds reached a place and they said "this far...no further." Usually without volition, without awareness, without calculating the cost. There's always a cost so do nothing without knowing what it is and being ready to pay it. 4 stars offered with the fellow-feeling of someone whose day is done

Odd Jobs makes a nonsense of "there are lines I will not cross":


It was elegant, almost, the way they worked in unison. If only my family had found me such a unifying force. I recognized it then, like petrichor, or some misplaced scent from childhood, not the familiar weight of existence crushing my lungs, but the awakening urge, the exquisite, racking compulsion to survive.

You know it when it bites you. If it never has...you won't. 4 stars for the honest rawness of stupidity

Pestilence channels the rage, the outrage, that only a less-loved child can summon forth. When the parent is, politely, gormless, the child's rage, outrage, can't ever find a single scrap of release. It festers and rots inside the adult. It never, ever goes away, nor (I say now in my oldness) should it. Few emotions are ever unmixed, none felt in adulthood can be, so that incandescent hating fury is all most of us ever get of the pure, unalloyed aliveness.

And Topper's insensitive, uncaring head deserves that baptism by bile. 4 stars for clarity and fearlessness

Splashdown brings Cukie, a bit player in "Pestilence" above, into the limelight. His long-absent father, Ox (short for "Lennox"), reappears in Daphne's life to get to know Cukie. Daphne, maternal auntie to Trelawney and Delano, isn't much for forgiving Ox. But she needs someone, anyone, to get Cukie away from her, to do what she can't: get him out of his head. Maybe Ox...?

Ox delivers those goods. That's never really a good thing, you know. It leads where you'd expect it to lead.... 4 stars

Independent Living gave me the heebie-jeebies. I've been exactly where those people are...unhoused, no safety net, and no one knows better than Trelawney how the people feel who never once expected to be where they are. And there's Trelawney, making a pittance doing the bidding of the corporate office that cares nothing about the people who live there.

Well...most of the bidding. And not always a good job of it. But there's a line for everyone. One they won't, can't...don't...cross. 4 stars

If He Suspected He'd Get Someone Killed This Morning, Delano Would Never Leave His Couch provides the answer to the question, "who is 'the man who can't catch a break,' Ken?" for once and for all. 4 stars

If I Survive You barely has time to make its case for its closing lines before they become, inexorably and inevitably, the words that no two people ever quite seem to arrive at in the same moment, at the same place.

You feel sad about her sadness, and sad for the both of you because your wounds are not particularly original, however genuine. You tell her what it's like to not be the favorite, to be the opposite of the favorite, and she tells you, "Try being an only child."

After doing things that you can't take back, after behaving in unforgivable ways, after all the seamy, seedy, bad-for-you crap has made you into a battle-worn hulk of emotional flotsam, there is at last no other choice but to follow the only advice we all ignore. Nope, not tellin' ya what it is, but you'll know it when you read it. 4 stars