RABBITS, truly trippy and not for everyone...but if it's for you, you'll eat it up with a spoon 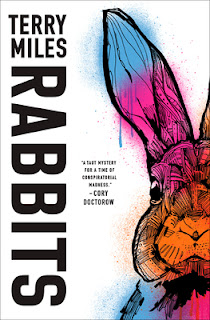 The Publisher Says: Conspiracies abound in this surreal and yet all-too-real technothriller in which a deadly underground alternate reality game might just be altering reality itself, set in the same world as the popular Rabbits podcast.

It's an average work day. You've been wrapped up in a task, and you check the clock when you come up for air—4:44 pm. You go to check your email, and 44 unread messages have built up. With a shock, you realize it is April 4th—4/4. And when you get in your car to drive home, your odometer reads 44,444. Coincidence? Or have you just seen the edge of a rabbit hole?

Rabbits is a mysterious alternate reality game so vast it uses our global reality as its canvas. Since the game first started in 1959, ten iterations have appeared and nine winners have been declared. Their identities are unknown. So is their reward, which is whispered to be NSA or CIA recruitment, vast wealth, immortality, or perhaps even the key to unlocking the secrets of the universe itself. But the deeper you get, the more deadly the game becomes. Players have died in the past—and the body count is rising.

And now the eleventh round is about to begin. Enter K—a Rabbits obsessive who has been trying to find a way into the game for years. That path opens when K is approached by billionaire Alan Scarpio, the alleged winner of the sixth iteration. Scarpio says that something has gone wrong with the game and that K needs to fix it before Eleven starts or the whole world will pay the price.

Five days later, Scarpio is declared missing. Two weeks after that, K blows the deadline and Eleven begins. And suddenly, the fate of the entire universe is at stake.

My Review: There is no possible way to explain the effect of this book to someone who's never dropped acid, consumed ayahuasca, or been down the psilocybin road. If you know, you know; if you don't, quite a lot of what is happening here is simply...weirdness. Which, to be fair, it is; but it is so much more than merely ornamentally weird.

If you're the one who read Ready Player One and thought, "hey, that could be me!" then you're prime meat for the story's more esoteric references. And you'll probably like it even more if you loved The Matrix but less so the sequels. I'm betting that, if you've read The Trial and/or Kafka on the Shore more than once, you'll read this book with relish.

But, crucially, absent a strong desire to seek out and complete patterns in the world, and in your head, the main pleasure of the book will slightly elude you. K (hi, Franz!) who narrates the book to us, isn't gendered. K's girlfriend Chloe is not inclined, under the circumstances of the book, to compliment K on diagnostic body parts. When talking through the extreme weirdness of life inside the rabbit hole of a planet-wide conspiracy with the stakes being your very life, suchlike stuff ain't no big. But in fact, there are little indicators that K is more than a gendered presence, is in fact a Jungian archetype, several in turn by my count. But that's a discovery for the reader to make. I will say this: I liked the hunt for those tells, too.

What worked best for me in the read was that very sense of patterns hanging from the trees, drifting in the air, making explicit shadows on the sidewalk as you're coddiwompling among the words. I enjoy the sensation of being led and misdirected to get to a story that won't take a final shape. I don't know Seattle, I took a serious aversion to it during my 1990s foray there, so a lot of the subtext from the locale was simply lost on me. (Greenness and verdant growth are menacing in two places on Earth: The Pacific Northwest and Ireland.)

There's something very soothing about conspiracy theories. One is assured of being Right: no evidence will ever penetrate the bunker mentality. There's a Reason for the random shit that happens: THEY want it to! And, if it's too random to fit into the pattern, THEY lost a round (which is scary and satisfying) or the computer introduced a new variable. Standing on the edge, looking down, and seeing Something is the only way most people can keep going. (I myownself see nothing, and absolutely vibrate with eagerness to lose myself in it.)

So on so many levels, this isn't a book aimed at me...I'm too old, too cynical, and too disinclined to believe there's a Purpose...but it's told in that densely imagined and deeply felt way that draws me in every time. That there are trappings I could do without, well, that's because they're there for others to enjoy. That there is no rush in Author Miles's unfolding of the story is a net good thing. He could've told the whole megillah in 200pp and had room for the publisher's entire catalog of SF/F titles. But the point of the story would've been violated.

Go on a journey. Listen to the people around you. I don't mean keep your ears open, I mean *listen* as the words come towards you. It takes a lot of practice to get good at listening, but this book is both a good place to practice and a rewarding discovery when you practice the skill here. I expect a lot of readers didn't fare well with the book because it simply doesn't follow ordinary trails to get between the start and the finish. If you're a Neal Stephenson reader, if Cryptonomicon and Reamde delighted you, here's another scratcher for that itch. You're not likely to be disappointed, either, Murakami readers. And best of all, you can get a paperback to take to the beach for Labor Day!