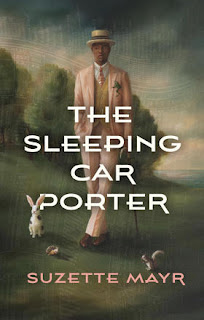 CONGRATULATIONS to Coach House Books & Suzette Mayr for THE SLEEPING CAR PORTER, a #queer #Black & #Canadian (got my almost-5* #BookRecommendation here: https://tinyurl.com/2p8sj6hk) being THE WINNER OF THE 2022 Giller Prize! Watch the shining moment here.

The author's search for models among people who don't necessarily want to be used as models, from Lit Hub.

The Publisher Says: When a mudslide strands a train, Baxter, a queer Black sleeping car porter, must contend with the perils of white passengers, ghosts, and his secret love affair

The Sleeping Car Porter brings to life an important part of Black history in North America, from the perspective of a queer man living in a culture that renders him invisible in two ways. Affecting, imaginative, and visceral enough that you’ll feel the rocking of the train, The Sleeping Car Porter is a stunning accomplishment.

Baxter’s name isn’t George. But it’s 1929, and Baxter is lucky enough, as a Black man, to have a job as a sleeping car porter on a train that crisscrosses the country. So when the passengers call him George, he has to just smile and nod and act invisible. What he really wants is to go to dentistry school, but he’ll have to save up a lot of nickel and dime tips to get there, so he puts up with “George.”

On this particular trip out west, the passengers are more unruly than usual, especially when the train is stalled for two extra days; their secrets start to leak out and blur with the sleep-deprivation hallucinations Baxter is having. When he finds a naughty postcard of two queer men, Baxter’s memories and longings are reawakened; keeping it puts his job in peril, but he can’t part with the postcard or his thoughts of Edwin Drew, Porter Instructor.

My Review: The burden of racism lands without rhyme or reason. In no way does R.T. Baxter, dentist in training, want to believe he needs to be "George" to the oblivious white people his job as a porter on this particular cross-Canada trip from Montreal to Vancouver. They call him George anyway; he knows better than to correct them. And he knows that he's retaining a degree of his selfhood by allowing them to use a name that isn't connected to his self. It's not his self the oblivious don't see. It's not his self the crude jeer at, demean, demand from. It's George, the porter.

The beginning of the book makes you, a twenty-first century reader, ill with the shame of being a witness to a man's humiliation at the whims of people no better and mostly significantly worse than he is. There's a repugnant attempt at sexual assault; there's a nasty trick played regarding a tip; most of all, Baxter...George, really...is w-bombed by one of the continent's most repulsive specimens of whiteness. And you're only on your first leg of the trip, Reader! BaxterGeorge is so very not on his first, fourth, fifteenth even. And the hits keep comin' with the company's Bartlebys announcing he has new demerits. New ways to risk losing this job that could, if he just makes himself stick the landing enough...enough more...times, get him closer to the goal of becoming a dentist.

What transpires in this 1929-set tale of oblivious, privileged people behaving as badly as they are capable of without tipping too far into actual malice...even their obliviousness is used to shield them from the reality of those who serve them!...is seen through the stream of Baxter's desperately fatigued consciousness. His never-ending round of service isn't met with thanks, gratitude, or praise; just with demands for more. His brain serves up the memories of men he's cared for, he's served in the manner he's happy to serve them. He can't always connect the "reality" outside himself with the needs and wants of the young man he really is. He doesn't have a second to himself to dive back into The Scarab from Jupiter, for heaven's sake, even though a landslide trapped them...train-them, keep up!...in a pass and the Egyptologists are just finding out where on Jupiter they've been taken by their captors. Esme, little newly orphaned scrap of flesh that attached itself to him to escape a Gorgonops of a granny, won't let him go long enough to keep Pulp and Paper, those pompous bombastic business travelers, keep them from complaining about his unconscionable lack of information as to why the railroad allowed their train to be delayed by an Act of God, and then there's Mad Mary making all the sorts of noises as only his conductor-queen self can about Baxter also watching over Templeton's sleepers-only car...but in Baxter's car the Doctor's having A Crisis over his David, his colleague David, being arrested and, well, couldn't Baxter...you know...stay?

It's a sadly unchanging situation. People who, themselves, want and need are instead wanted and needed at, and only the right ones get those needs met. What Baxter gives up in his one wild and precious life is meant to be an investment in a better personal as well as social tomorrow as a dentist caring for needful peoples' teeth. What happens to him in the meantime is the out-of-body experience of sleep deprivation, the absolute and utter abnegation of meeting the needs of people who can't so much as bother to learn, still less use, your name, the all-consuming pandering demanded by those whose lives are built on shoals of "I PAID FOR THIS" without ever seeing the vast deeps of suffering the shoals stand in.

Capitalism is cruel, and the comfortably fixed for money like it that way. There's nothing wrong with the system, says the pale faces and pink gums of the privileged. Look, I tipped George, didn't I?

Simultaneously moving, infuriating, beautiful, and deadly, this is a superb choice for the Giller Prize. 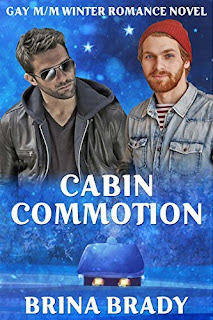 The Publisher Says: High-paid escort Marcus graduates college and he’s ready to leave The Manor. Working for pimp Kalepo for four years, Marcus believes there’s no way out without paying a fatal price. When Kalepo ends Marcus’s apartment lease and moves him into his home as his full time escort without his permission, Marcus leaves California on a train to New York City and a bus to a rented Vermont cabin for one month to hide from Kalepo and to think about his future.

Playboy Blaze is the son of Sal Bossio, a New York City Italian mobster. His father orders him to his Vermont cabin for one month while he settles mob business. Blaze hires a rent boy for one month, but unexpected events occur and he finds himself alone in Vermont. When he reaches his cabin, he finds a stranger sleeping in his bed. The gorgeous gingered-haired man could be a hitman sent by his father’s enemies.

Two lonely men solve the cabin commotion by sharing the only bed in the cabin during their sex fest, saving hidden pasts and tough decisions until the month ends.

I RECEIVED A DRC FROM THE PUBLISHER VIA BOOKSPROUT. THANK YOU.

Marcus's parents aren't. They left him with a nasty uncle whose rage at him for being a faggot (a word we see a lot in this short book) led to his living the life of a highly paid escort. I mean, it's good to earn your keep by using the weapon that got you chucked out, right? Talk about lemonade from lemons!

The life of a seriously pricey escort isn't materially deprived. Marcus still feels abandoned, feels rejected, and then feels everything in the world reorient itself when he meets Blaze (and Blaze's anger issues). Blaze's dad is a mafioso, and is perfectly aware that his son's a hothead who gives men head. Yeah, so? My son, my priority, not you and your stupid issues.

Well, it's a romance, you know we're gettin' our HEA. You also know we're gettin' our drawers warmed up, some smexytimes and a little helping of spanking kink along the way. These guys don't waste a lot of time fully clothed. Their sex wasn't fresh or new to me, but it wasn't rote or mechanical. I believed these two characters would have this sex. And I believed they'd have these exact, precise miscommunication problems, one prideful and arrogant (Blaze) and the other wary and untrusting (Marcus). What I didn't expect was that Blaze's Pop would adopt Marcus with such tenderness. He genuinely sounds pissed off when Blaze acts the dickhead and drives Marcus away. He even gives Marcus the plan to make Blaze pay for it by igniting his jealousy via a fake date!