THE GREENLAND BREACH, cli-fic thriller with some kickass characters 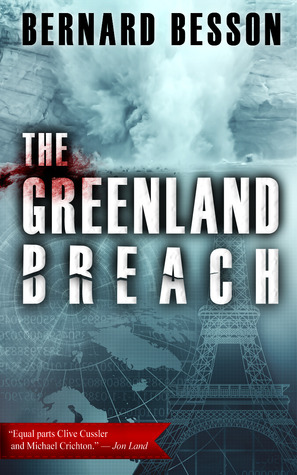 : Experience the eco-thriller at a whole new level in this cli-fi spy novel. What is the real impact of global warming? This stylish thriller about climate change and its consequences couldn’t be more topical. Espionage, intrigue, and behind-the-scenes struggles for natural resources combine with French freelance spies and Bond-like action for a convincing, beautifully orchestrated tale, “like a sophisticated manga.”

The Arctic ice caps are breaking up. Europe and the East Coast of the Unites States brace for a tidal wave. Meanwhile, former French intelligence officer John Spencer Larivière, his karate-trained, steamy Eurasian partner, Victoire, and their bisexual computer-genius sidekick, Luc, pick up an ordinary freelance assignment that quickly leads them into the glacial silence of the great north, where a merciless war is being waged for control of discoveries that will change the future of humanity.

THE PUBLISHER SENT ME A DRC AT MY REQUEST. THANK YOU!

My Review: John Spencer Larivière heads Fermatown, his own special crack spy team he starts after his retirement from the French spy agency. His current, and first really profitable, job is to protect a silly girl-child from the consequences of her rash actions against her Canadian father's Arctic oil-and-gas business interests. This sounds a lot like the set-up for The Expanse book and television series, doesn't it? As framing devices go, it's not a bad one. John left the intelligence service after inheriting a house from an aunt...the kind of house that you see on those abandoned-castle sites. I want that house.

John is described as a gentle man, and his actions are oddly in accord with the description. I never had the feeling that he was some rampaging testosterone factory kept lightly controlled, waiting for an excuse to open a can of whoopass on someone. It was a refreshing change from most of thrillerdom's male leads. Even female leads, like a certain dragon-tattooed wench.

Victoire, John's partner as well as his wife, is the muscle being martial-arts trained. She's also a wisecracking disrespectful annoyance until about two-thirds of the way through the book. I found her to be a drag all the way through the book because she's not given anything all that challenging to her skill set to do. What she does do, she does splashily. I get it: Powerful woman doesn't need saving and in fact saves others. But can it please be more than enough for her to need to dig deep sooner than she's forced to do? I get the feeling she's really just doing her bit and then fixing her manicure while others are narrating the action.

Their computer-genius partner is Luc. Oh my. Luc is the sex machine that every spy novel needs. He uses his moneymaker(s) to great advantage throughout the book. It's refreshing in the extreme for his sexuality to be frankly omnivorous and for very little of consequence to be said about it. When bear is hungry, bear will eat. Bear eats a lot in this comparatively short book...and does it while maintaining an undercover persona. That's a handy trick (!) to have. Their spy outfit runs a semi-phony website for corporate research. Luc plays a researcher/reporter for the site and when someone needs to give up a datum but isn't being forthcoming enough for Luc, he flips the sex machine on and bam! Down they go, up comes the needed datum, and the story cracks on.

And the story does indeed crackle with energy, fed by many wires from multiple characters and organized into several competing circuits whose interconnection doesn't instantly leap forth. That's both a plus and a minus, as the pace can be so quick as to leave the reader wondering why this or that is happening, why the story needs all the characters it has...and I'd say it doesn't really need so many. It dilutes the effect of the main three series characters to have the many other voices speaking to us. There are some data points that can't reasonably be delivered any other way, I grant you, but it seemed to me to be a net hindrance to the reader's enjoyment of the story.

But the story itself is a bit of a problem. Greenland's de-icing is progressing at a terrifying rate in reality. This story's ecoterrorists' deliberate acceleration of that fact into a crisis-level event is very, very tense and provides a real edge of planet-wide stakes. Devastation from the tsunamis inherent in a truly large chunk of ice calving off the place actually makes me jittery to contemplate, living as I do on a sandbar stuck out into the North Atlantic...and on the beach no less. But the story, a complex chase after a MacGuffin, ends badly in that the MacGuffin's mere existence simply vanishes. I was deeply bothered by this. If people are willing to kill to possess the MacGuffin, make me understand that the story resolves its possession. I was left muddled.

The spycraft was interesting, the fiendishly knotted plot strands were each compelling, the pattern the whole made was still unresolved...but the verve, the energy, and the inclusion of a bisexual good guy elevate the read well above the expected and well-worn paths of American spy thrillers. It isn't perfect but it is very good, and it won't disappoint you if you're looking for a diversion that isn't substance free.
Posted by Richard at 6:30 AM