THE PRIZE, a damning indictment of greed and careerism with a huge dollop of blame for the Lady Bountiful syndrome 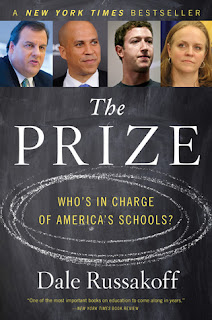 The Publisher Says: Mark Zuckerberg, Chris Christie, and Cory Booker were ready to reform our failing schools. They got an education.

When Mark Zuckerberg announced to a cheering Oprah audience his $100 million pledge to transform the downtrodden schools of Newark, New Jersey, then mayor Cory Booker and Governor Chris Christie were beside him, vowing to help make Newark “a symbol of educational excellence for the whole nation.” But their plans soon ran into the city’s seasoned education players, fierce protectors of their billion-dollar-a-year system. It’s a prize that, for generations, has enriched seemingly everyone, except Newark’s children.

Dale Russakoff delivers a riveting drama of our times, encompassing the rise of celebrity politics, big philanthropy, extreme economic inequality, the charter school movement, and the struggles and triumphs of schools in one of the nation’s poorest cities. As Cory Booker navigates between his status as “rock star mayor” on Oprah’s stage and object of considerable distrust at home, the tumultuous changes planned by reformers and their highly paid consultants spark a fiery grass-roots opposition stoked by local politicians and union leaders. The growth of charters forces the hand of Newark’s school superintendent Cami Anderson, who closes, consolidates, or redesigns more than a third of the city’s schools—a scenario on the horizon for many urban districts across America.

Russakoff provides a close-up view of twenty-six-year-old Mark Zuckerberg and his wife as they decide to give the immense sum of money to Newark and then experience an education of their own amid the fallout of the reforms. Most moving are Russakoff’s portraits from inside classrooms, as homegrown teachers and principals battle heroically to reach students damaged by extreme poverty and violence.

The Prize is an absorbing portrait of a titanic struggle, indispensable for anyone who cares about the future of public education and the nation’s children.

Another gift from a special friend. Thank you, darling heart, but can I have a comic book now?

My Review: Betsy DeVos is the Secretary of Education. That sentence, plus the one about the racist, sexist shitheap that is Jeff Sessions becoming the Attorney General, really should drive home the point that these people your fellow Americans voted into office are the lowest of the low, the lowest and the least principled represented in halls of power where their like should simply never be allowed.

I do not belong to the school of thought advocating healing our divisions. I advocate the secession of the decent people from the rotten-souled fascist right-wing rest of y'all. And we'll take our tax money with us...we pay more than we get.

But then my conscience gets to me. What about the desperately poor and the hungry whose lives will, horribly, get still worse? The schools that will close? The school lunch programs that will vanish forever?

This book makes the cost of the Union's dissolution stark. It's never mentioned. It's not part of Dale Russakoff's brief in the least. But listen to this:


To those...who see education through the lens of students and classrooms, it is obvious that urban public schools are being asked to overcome nothing less than the effects of poverty. Reformers are right...to insist on consistently excellent teaching and leadership, but the results in Newark and in distressed cities across the country make clear that much more support is needed.

Given that most of the nation's schools are financed by property taxes (a system as blatant in its intent to preserve and protect the existing system of privilege as can be designed), and given that US government spending on early childhood support is abysmal compared to the entire rest of the planet, where is that support meant to come from? DeVos won't be there in her seat of power advocating for the Head Start program or the school lunch program. So now what?


“Education reform is not about its leaders and their prerogatives. It’s about communities,” Michael Lomax, president of the United Negro College Fund and an ardent reformer, wrote on The Root, an online magazine. “Education reform doesn’t have to be—indeed, cannot be—force-fed to communities of color . . . We can be equal partners in ensuring what is best for our children and all children. It won’t work any other way.”

Inviting dialogue! Wow. What a concept. Except that there are a lot of people with huge financial stakes in the status quo that do NOT want to see reform. A 1994 Department of Education audit (mentioned in the book) of the Newark system found breathtaking corruption, a building that a school board member was selling to the district for $2.7 million that was generously worth under $200,000 being the one I was most repulsed by. In fact, "outsider" Democrat Newark mayor Cory Booker presented machine Republican New Jersey Governor Chris Christie with a school reform plan that warned explicitly against opening the process to public scrutiny since the unions and the other money-suckers would subvert or derail the process to protect their slots at the trough. (My phrase, not his.)

Then again, it's not just the greed factor that's at work in this process and its manifest failures:


“Education reform comes across as colonial to people who’ve been here for decades,” [an insider] said. “It’s very missionary, imposed, done to people rather than in cooperation with people.”

So even though our kids are failing to get even the minimal education they're being offered in the first place, who the hell asked your white ass to come sit at the table and tell us what's what? The Annenberg education initiatives of the 1990s (the Chicago branch of which featured one Barack Obama among its leading lights) faced the same issues. Here's a piece by a Teach for America alumnus. He isn't sanguine about the efficacy or the future of the program. Russakoff gives more detail, which I felt was nicely summed up by this:


“The ethos when I went through Teach for America was that good teaching and good leadership could solve the problems of poverty,” said [a Newark program participant]. “That’s part of the pie, but that’s not all of the pie. Our most dynamic teachers were burning out—the need and anger in the children, the mental health issues, the absenteeism, the transience.” They were witnessing the effect of what researchers call adverse childhood experiences, multiple traumas that, studies have shown, significantly interfere with learning and focus in children in the most disadvantaged communities.”

Back to the problems of poverty that education is being asked to overcome. That is manifestly absurd. Education is the way out of poverty. This is an article of faith among the educated. But what does that statement look like to a child whose world contains one educated person, usually not of his or her own ethnic background? "Be like me," they hear said earnestly and with all the best wishes in the world.


Research had shown that children in the lowest-income families heard only a fraction of the words or conversations that were the daily bread of the more affluent. By age three, the difference was an astonishing twenty million words. (my emphasis)

Are you getting a view of the biblical proportions of this problem yet? The sheer magnitude of the changes needed to make even a minuscule dent in the problem? The reformers have hammers. The problems become nails:


“A lot of high-stakes accountability has become self-defeating—focusing solely on the identification of bad schools, the bad teachers, as opposed to creating a signal and involving teachers in processes that lead to investigations and changes,” [an expert] said.”

So here's The Purpose Explained:


[An expert] said the system, known as Student Growth Percentile, was designed to measure student gains or losses, not to assign blame or credit for them. “Simply focusing on teachers as being the only potential cause of growth of students is pretty obviously myopic..." The data would be more useful...as a starting point for discussions with teachers on the reasons individual students are improving or losing ground, which could include many factors in and out of school.

Mmm hmm. Statistics used as ploughshares, not swords, in the battle to save yet another generation of poverty-mired Black children from a lifetime of marginal existence. That's gonna happen. After all, the entire system isn't based on the need for the Black child to grow up to be a grunt worker, a pawn, or a prisoner, is it?
/sarcasm

So what's the answer? Mark Zuckerberg, who comes across in this book as a genuinely well-meaning man with a slightly different hammer he wants to wield on Newark's public school system:


Zuckerberg’s document laid out similar goals: “Restructure pay scale to increase base salaries for new hires . . . Abolish seniority as a factor in all personnel decisions and incentivize the removal of poor performers.” He also wrote that he wanted the best teachers to receive bonuses of up to fifty percent of their salary, the kind of incentives paid to top workers in Silicon Valley.”

Selected from among many other equally utopian proposals to stand for the dangers of false equivalency in public conversation about society's needs. Zuckerberg, a political conservative, wants to model the world on a business platform created by and for people who are high achievers. In Alcoholics Anonymous, this is called "acting as if," or "fake it til ya make it," an idea that behavior becomes habit becomes character.

Oh dear. That's not such a great idea, Zuck, especially since your own organization is so...fallible, let's say, due to its constituent members aping your own regressive politics and enforcing the attendant repressive and unpleasant standards on the billions who don't want any part of them. But that's another rant for another day.

Businesses aren't by their nature equipped to deliver what the teachers in the trenches say with near unanimity what they really want:


[T]eachers consistently tell researchers that, given the choice, they would opt for a good principal and supportive working conditions over merit pay. Indeed, research had found no correlation between merit pay and student achievement, although reformers and venture philanthropists were fighting hard to make it a staple of new teacher contracts.

So that's easier and cheaper than the throw-money-at-the-problem shtik, right? That's the teachers sorted. And the kids?


Children with more than one traumatic experience—violence, severe poverty, family breakup, or substance abuse in the home—were more than twice as likely as others to fail at least one grade.

And we're back to square one: Support the family that a child comes from, help the family eat, live in a stable location, get the services that it needs, and the battle's more than half won.

Does any of that seem to you likely to happen in Trump's America?
Posted by Richard at 6:30 AM