THE SONG OF ACHILLES, Patroclus tells The Iliad 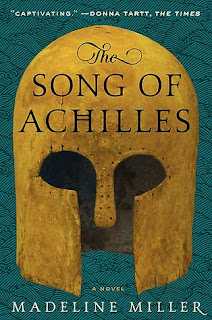 The Publisher Says: Greece in the age of Heroes. Patroclus, an awkward young prince, has been exiled to the kingdom of Phthia. Here he is nobody, just another unwanted boy living in the shadow of King Peleus and his golden son, Achilles.

Achilles, 'best of all the Greeks', is everything Patroclus is not — strong, beautiful, the child of a goddess — and by all rights their paths should never cross. Yet one day, Achilles takes the shamed prince under his wing and soon their tentative companionship gives way to a steadfast friendship. As they grow into young men skilled in the arts of war and medicine, their bond blossoms into something far deeper — despite the displeasure of Achilles's mother Thetis, a cruel and deathly pale sea goddess with a hatred of mortals.

Fate is never far from the heels of Achilles. When word comes that Helen of Sparta has been kidnapped, the men of Greece are called upon to lay siege to Troy in her name. Seduced by the promise of a glorious destiny, Achilles joins their cause. Torn between love and fear for his friend, Patroclus follows Achilles into war, little knowing that the years that follow will test everything they have learned, everything they hold dear. And that, before he is ready, he will be forced to surrender his friend to the hands of Fate.

Profoundly moving and breathtakingly original, this rendering of the epic Trojan War is a dazzling feat of the imagination, a devastating love story, and an almighty battle between gods and kings, peace and glory, immortal fame and the human heart.

My Review: Here I am faced with a conundrum: What new thought can I give? This is The Iliad, told from Patroclus's point of view. Miller starts the story with Patroclus's memories of his father, King Menoitius, whose unloving, unforgiving horridness blighted Patroclus's childhood. When Patroclus causes the death of a bully who happens to be a powerful noble's son, the boy's family gives the king what he wants: An excuse to rid himself of unpromising Patroclus. He is exiled (a nine year old boy) to Phthia, and the court of King Peleus.

Father of Achilles. Born to the sea-nymph Thetis. Best of all the Greeks...Aristos Achaion...in each and every thing, yet mortal and so consigned to our world.

Patroclus and Achilles find each other, and Achilles chooses the unassuming boy to be his companion. Peleus says, when the choice is made, are you sure about this, son? This boy will add nothing to your lustre. Achilles responds, without rancor or boastfulness, “I don't need him to.” This being self-evident and inarguable, Peleus shrugs and life goes on. The boys spend a golden childhood as best friends, a golden adolescence as lovers, and, after being outed by Odysseus in Scyros where Thetis was trying to hide her son Achilles from the Trojan War where he is fated to die, a long (for the times) manhood as husbands. Everyone knows what time it is. No one says boo about it, except Thetis who LOATHES Patroclus because he's not good enough for her little boy...or is she just jealous of an interloper commanding her son's love? Who would dare? Achilles is a killing machine. He is the Aristos Achaion, the Finest Among the Greeks, for a reason.

And now we rejoin the mainstream of The Iliad for the remainder of the plot, with only a slight change in angle of view.

I think I wrote three heart-felt appreciations of this book. It is strong, and beautiful, and passionate. It is tough, and cruel, and inevitably sad. It is tender, and loving, and generous. It is indeed the Song of Achilles, sung by Patroclus, and it is a fitting funerary offering to them both.

But let me get out of the story's way. It speaks for itself.

”I will go,” he said. “I will go to Troy.”
The rosy gleam of his lip, the fevered green of his eyes. There was not a line anywhere on his face, nothing creased or graying; all crisp. He was spring, golden and bright. Envious death would drink his blood, and grow young again.
He was watching me, his eyes as deep as earth.
“Will you come with me?” he asked.
The never-ending ache of love and sorrow. Perhaps in some other life I could have refused, could have torn my hair and screamed, and made him face his choice alone. But not in this one. He would sail to Troy and I would follow, even into death. “Yes,” I whipsered. “Yes.”
Relief broke in his face, and he reached for me. I let him hold me, let him press us length to length so close that nothing might fit between us.
Tears came, and fell. Above us, the constellations spun and the moon paced her weary course. We lay stricken and sleepless as the hours passed.

I can't make any stronger a case for the book than this. I hope you will read it.
Posted by Richard at 6:30 AM