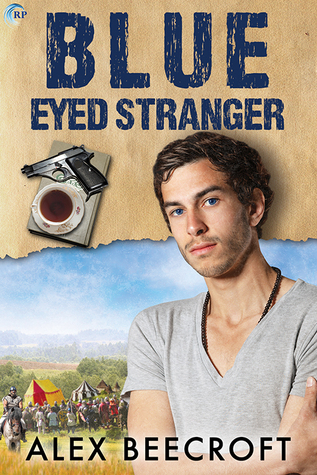 The Publisher Says: Billy Wright has a problem: he’s only visible when he’s wearing a mask. That’s fine when he’s performing at country fairs with the rest of his morris dancing troupe. But when he takes the paint off, his life is lonely and empty, and he struggles with crippling depression.

Martin Deng stands out from the crowd. After all, there aren’t that many black Vikings on the living history circuit. But as the founder of a fledgling historical re-enactment society, he’s lonely and harried. His boss doesn’t like his weekend activities, his warriors seem to expect him to run everything single-handedly, and it’s stressful enough being one minority without telling the hard men of his group he’s also gay.

When Billy’s and Martin’s societies are double-booked at a packed county show, they know at once they are kindred spirits, united by a deep feeling of connectedness to their history and culture. But they’re also both hiding in their different ways, and they need each other to be brave enough to take their masks off and still be seen.

My Review: Unstoppable force, this is immovable object. Advise your trajectory can now continue unimpeded.

History geek Martin meets morris dancer Billy. Each is hella hot for the other. Problem 1: Martin's a half-Sudanese/half-Yorkshireman Viking warrior re-enactor. Not exactly the best candidate for romantic kissy-face, more the hot sweaty sex type, oh and shelve that hand-holding lark. Problem 2: Billy suffers the agonizing, debilitating curse of depression. It's all he can do most days to haul himself out of bed and there are times even that isn't on. Problem 3: They can't reach around their barriers to get at each other consistently despite a near-desperate need for the other man's being.

Add in the immigrant parent with impossibly high expectations, the hostile work environment, and the curse of trying to lift words out of the stygian gloom of broken souls...well. It's all I can do to put the book down long enough to tell you to go get it and read it and defy you not to fall in love with these marvelous men before re-reading it.

Yep. Thass right. I, the arch-advocate of "too many new pretties, don't bother me with that re-reading thing" am going to re-read this book as soon as I close my computer because I absolutely can. not. WAIT. to re-experience the ending of this book.

Yep. Thass right. I, the ever-whinging arch-complainer about the unsatisfactoriness of endings that either tie things up tight with Honey Boo-Boo bows or leave so many threads dangling that they resemble old-fashioned fringed vests (waistcoats to y'all Brits) am going to re-savor the beautiful, beautiful ending Ma Beecroft has imagined for this book.

Oh, and that missing half-star? It's the same place that the missing thirty thousand or so words dedicated to Martin's family, Billy's morris dancing side, and the gents' mutual projects are. I'd glower about it some but I'd be fronting. I love what's here enough to demand more. Brevity might well be the soul of lingerie, but it's not on when you're immersed in a deeply satisfying read.

Oh, and the book club crossover is on that list as well. Better pump the MIA count up to thirty-five thou.
Posted by Richard at 6:30 AM