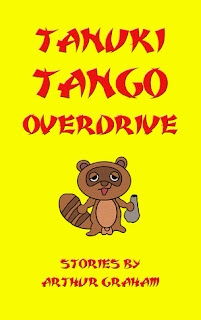 The (Self-)Publisher Says: What happens to Japanese yōkai once they reach middle age? How do they adapt to the sex-crazed, ultraviolent hyperreality of our modern world? And who all wants to fuck? Find out in TANUKI TANGO OVERDRIVE, by Arthur Graham!

My Review: The tanuki is an actual living creature, a pretty one at that: 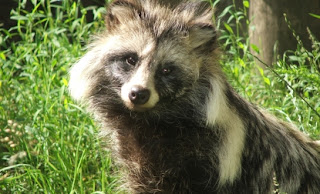 Totes adorbs! I mean, could you DIE from the cute!

But those are images of the REAL tanuki, a canid basal species unrelated to the raccoon that it resembles, but not closely related to Fifi or Duke either. They're considered an invasive species in some parts of their naturalized Baltic homeland. They're generalists, eating whatever they can find; they don't fear mankind particularly; and they have lovely, silky fur. They're hunted for the fur which is then knowingly mismarketed as "faux fur." Since they're not endangered, I don't much care about that. I care that the little darlings threaten endangered riparian-nesting birds and several threatened turtle species with their omnivorous ways. But enough about these dratted doggies! Arthur didn't write about them. He wrote about these guys: 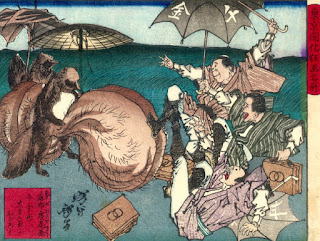 Not quite so cute, but funny, tipsy trickster spirits. Japanese culture isn't as familiar to me as Western cultures are, but what I know leaves me verschmeckeled. Dog-men with big balls that they sling over their shoulders get drunk and play pranks on mere humans. Okaaaaay...I guess I'd be more impressed by this if, say, Alexander Skarsgard, Chris Hemsworth, and Ryan Gosling played live-action versions of them. Hint, hint Hollywood.

The Tanuki Tales are amusing, the translated ones I've read are anyway. They're Rabelaisian and bawdy and utterly unlike the Japanese culture of my stereotypes. It's a little like stumbling across Japanese porn in its head-scratching strangeness. Then Arthur got his mitts on the concept. Ever tried putting out a grease fire with a hose? Pretty much gives you the sense of what Our Hero has in store for the intrepid reader. Three tales that present Arthur's intelligence and erudition in an absurd light as evidence that he doesn't take himself or that education he worked so hard to get seriously.

Tanuki vs. the Aokigahara Swingers Club has Mr. Tanuki, a bored middle-aged salaryman, having dinner with his wife and his bottle. A mysterious invitation to a swingers' club arrives, which his wife seems suspiciously unsurprised by, and she talks him into attending without a whole lot of trouble. Once there, Mrs. Tanuki vanishes and Mr. Tanuki gets an offer he can't refuse from a luscious redhead called Kit. Who turns out to be Kitsune, the trickster god of Japanese myth. Does the concept "monster porn" exist in your bubble yet? If not, it soon will...and this somewhat bizarre twist on the meaning of swingers and the nature of zombies will make your hairs do a little dance.

Tinseltown Tanuki revisits the Tanukis' salad days of great wealth in the wake of Super Mario Bros 3 featuring Mr. Tanuki's trickster demon talents. From great heights there are only great falls, and the Tanukis end up living as raccoon-dogs in an East LA trash can before long. One night at their local dive bar, they meet a stranger...a famous stranger...and an indecent proposal changes their lives. Not quite as much as it changes the famous stranger's, of course, these being Tanuki.

Shinkansen of Love goes where no bullet train has gone before. Several times. Poor Mrs. Tanuki, she's spoiled for good after this one....