DUNE, the classic novel made into a bad movie, a good miniseries, and now...? 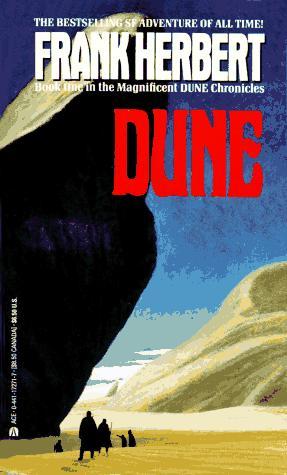 The Publisher Says: Here is the novel that will be forever considered a triumph of the imagination. Set on the desert planet Arrakis, Dune is the story of the boy Paul Atreides, who would become the mysterious man known as Muad'Dib. He would avenge the traitorous plot against his noble family--and would bring to fruition humankind's most ancient and unattainable dream.
A stunning blend of adventure and mysticism, environmentalism and politics, Dune won the first Nebula Award, shared the Hugo Award, and formed the basis of what it undoubtedly the grandest epic in science fiction.

My Review: I first read this novel in 1975. It seems impossible that it was over 40 years ago, but the math is inescapable and time inexorable. My teenaged brain was rewired by the read. I had a standard by which to judge all future SFnal reads, and it was a high one. I was transported into a future I was utterly convinced would be the the one I'd have descendants to live in. I suppose that could yet happen. I'm a lot less convinced now that the human race's future is that long. Age might bring wisdom, I wouldn't know about that, but it sure brought me a booster shot of cynicism.

The Orange Catholic Bible, the books of the Empress Irulan, they all seemed to me so real...the cry "never to forgive, never to forget" rings louder today than it did in 1975 because I've lived through so many iterations of it by now. Us people, we love the shit out of our vicious vengeful vendettas, don't we. Frank Herbert got that right as all hell.

Trouble is, ol' Frank wasn't any kind of a writer, was he? He had flashes of good phrasemaking, he had long stretches of competent prosemongering, and then there was the rest of the ninety jillion words in the novel. Serviceable is le mot juste. And TBH I feel pretty generous putting it that way.

But then came David Lynch. Oh dear, oh dear. I'm not a worshipper of Lynch's at the best of times. I thought Blue Velvet was brummagem and boring; Twin Peaks was portentous twaddle. So the Kool-Aid passed my seat, I fear. His 1984 adaptation of Dune was downright laughable. I left the theater torn between gales of laughter and gusts of grief-stricken tears. Sting in that stupid winged underwear! KYLE MacLACHLAN as Paul Atreides!! Ludicrous, all of it, and the problems started with the butchery of so much of the novel that even the bones were scattered in no sensible pattern. Inevitable, really, as the runtime of the film was a paltry two hours and seventeen minutes. Imagine trying to wedge a 600-page magnum opus dense with world-building and replete with internal ironies and levels of meaning into the length of a good winter's nap. Didn't work so good.

SciFi Channel, gods please bless their collective hides, approved a mini-series written and directed by John Harrison in 2000. It was 4:17:07 in total. That was *almost* enough to do justice to the story. The result was infinitely superior to the Lynch version. It was a joy to watch for me, a forty-year-old cruelly wounded mess of a man, and felt like a balm to my fanboy memory of the novel. Perfect? No. Great? Yep!

Then I found it on YouTube and thought I'd take a respite from reality by giving it a rewatch.

You know what? Special effects age badly. Mid-budget TV ones age really, really, really badly. The screenplay clunked a good deal. The story, however, was all there and was well done, with the prunings and bonsai sculptings well chosen and well shaped. And the story was just about as timely as anything I could've hoped to avoid!

Dune bashed me upside the temples with its portrayal of the collapse of Empire and revolution of the have-nots in a way it couldn't have 17 or 42 years ago. It felt more timely, it packed more wallop than it possibly could have in fatter times. This is my idea of good myth-making: A story that isn't finished telling us the truth yet, and doing so in a way that compels, impels, propels us to go on the journey ready or not. The idea of a Savior come to rescue us is eternally appealing, the sight of the unworthy getting their comeuppance is evergreen. It wasn't what I was seeking, wasn't escapist boom-bang-blowwie, but it was what I needed. A bit of heartening to fight again, odds be buggered.

And now I'm told that there's a new version on the way, possibly to be directed by Denis Villeneuve of Arrival fame. That's some fire-power there. A director with clout and access to Hollywood's cash box could do something special with this epic...though I'm still very concerned with the issues inevitable in adapting the story to movie length.

Isn't it interesting how every decade seems to call for a new version of the story? The 1960s had the novel; the 1970s the unmade Alejandro Jodorowsky adaptation, a perfect reflection of the decade's malaise/limitation mentality; the 1980s cheesy, overblown one-note-and-it's-the-wrong-one ethos; the 1990s void, again perfectly in keeping with the culture; the 2000s TV version, as everything shrunk in the aftermath of the floodwaters of Bush's election stealing; and now a big-budget, major-talent remake! That hasn't happened yet! And bids fair not to, in the parlous economic times ahead!

Frank Herbert's Dune is a great rewatch. The novel hasn't finished with us yet. I hope it won't any time soon.
Posted by Richard at 11:31 AM