WE'RE STILL RIGHT, THEY'RE STILL WRONG: or, What Might Have Been 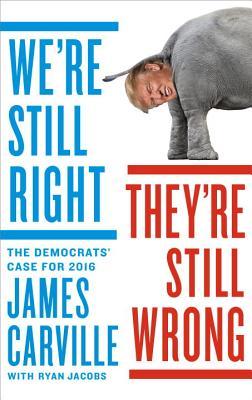 The Publisher Says: Every politico and pundit has tried to explain the 2016 presidential race, but James Carville, the multiple best-selling Ragin' Cajun and grand strategist of Bill Clinton's rise to the White House has largely stayed silent. Until now.

He straddled the punch bowl, dropped his pants, and whipped out his member, which, he assured everyone, was very large. Then Donald Trump pissed right into the punch of the Republican Party.

So begins We're Still Right, They're Still Wrong with that image of Donald Trump defiling the celebration that should've been the GOP Establishment's easy march to the White House.
In We're Still Right, They're Still Wrong, Carville updates his #1 New York Times bestseller from 1996, the campaign tract that Bill Clinton once credited for his re-election. Carville skewers the GOP's dumpster fire of a record over the past twenty years, and argues that Trump is the living manifestation of a failed party. From income inequality to race relations, Carville believes that Democratic Party is not only the dominant party of the past, but of America's future, too and he makes the case in his uncensored and earthy style.

Among other things, We're Still Right, They're Still Wrong features a hot take on the Clinton e-mail scandal, a story about Carville's momma schooling a pair of crawfish mongers, a lecture on political panics called The Anatomy of Bullshit, and a recipe for how to grill your (non-existent) Trump Steak.

And wit and sharp tongue aside, Carville turns it all into the most cogent and thoughtful analysis of the 2016 and how the Democrats can and must be victorious.

My Review: From its arresting cover image to its trademark homespun vituperation, this is a classic Carville rant with hard covers and fancy typography. You'll like it, in a certain wistful way, if you're a liberal; otherwise don't bother.

And why, a reasonable person might ask, am I reviewing a rally-the-troops book from a failed presidential bid?


In many ways, the Democrats have enjoyed the opposite record of Repblicans—we haven't been abysmally wrong about everything—and yet, we're not enjoying the opposite result. If the Republican Party is cracked and shattered, ours should be stronger than ever, right?

That right there is the first reason why I'm reviewing the book. This is a piece of soul-searching I am not seeing the Democrats do. Yes yes, the Donald's in the White House, the world will end shortly, Hillary won the popular vote, so now's the time to circle the wagons! Party Party rah rah rah!

Hillary Clinton lost the 2016 presidential election. If she hadn't, she would have taken the oath of office instead of that orange buffoon whose temper makes him unfit to lead a troop of baboons and whose fitness for office—ANY office, second assistant vice-undersecretary of cat-boiling on up—is not, by any scale yet invented, measurable. And she lost it to The Donald. That *has* to hurt.

The Electoral College has failed in its Constitutional duty, to prevent by the exercise of wiser, older, whiter heads than prevail amongst the hoi polloi, the inauguration of a manifestly unfit candidate for the presidency. Now is the time, popular-vote quoting folks, to get after that Constitutional amendment to make the popular vote determine the occupant of the White House! Because, you see clearly now, as of this good moment, the popular vote matters less than a gnat's fart does in a tornado.

But the main failing was the Democratic Party's. The crooked and disgusting theft of the party's nomination from the candidate clearly preferred by the Democratic Party base was allowed to stand. That was and is the single most shameful moment in American political history. Everything that has followed after that is merely the result of the various nefarious shadow parties to the election realizing that the system is well and truly broken so any-bloody-thing goes. Half of registered Democrats stayed home on Election Day. And you bet the GOP-state voter restrictions had an impact; the margins of Clinton's loss in the key states was razor-thin.

A popular, untainted candidate would have motivated the voters to turn out. Mrs. Clinton, after years and years and years of nonsensical and deeply cynical political attacks and smear campaigns created in the fetid swamps of hateful, wrongheaded opponents of her very modestly progressive political stance, was not that candidate. The Democratic National Committee conspired with her campaign to ram her nomination through despite the base's clear absence of any desire to see her as the president.

And STOP ALREADY with the third-party "protest vote" horse manure. Had every single third-party voter in each and every battleground state cast their vote for Mrs. Clinton...it wouldn't have put her in the White House. She lost, guys. The more qualified, more prepared, almost infinitely superior as a human being candidate lost.

Because the Democratic Party did not listen to its base.

Sam Houston, the great Texan and patriot, said of a very similar and equally highly qualified candidate for a different presidency:


I have personally known Mr. Jefferson Davis for many years. [he lists the numerous and very important, influential positions held by Jefferson Davis] He is a gentleman imbued with all the instincts of Southern honor and chivalry, but I want to tell you something you may not know about him: Jeff Davis is as ambitious as Lucifer and cold as a lizard.

(from the book SAM HOUSTON by James L. Haley)
If *I* can't warm to a woman who championed a national health plan, a Medicare for All, in 1994 while she was the First Lady, then there's a real problem. Almost every factual claim about Mrs. Clinton hurled at her by the Republicans involved in the actual, real "vast right-wing conspiracy" was bull. It was piffle. It was fabricated from splinters and wisps and puffed to immense and unbelievably exaggerated proportions, despite being demonstrably untrue. You know why it stuck?

Mrs. Clinton is Hermione Granger. "She's a nightmare," squeaked a pubescent Ron Weasley in the memorable scene from Harry Potter and the Sorcerer's Stone. Yep. The swot of a snobby little priss who sat at a front desk in every class, had her own carrel in the library, and affected to eat her homemade lunch outside, "enjoying the air." We just don't like her.

Admire, perhaps. And to be sure she has her coterie, her Pantsuit Mafia. But the bulk of The People just...don't like her. All the mud slung at her, which was of no factual substance, would never have stuck to someone the people liked. Should that make a difference? Should the many and genuine contributions made by Mrs. Clinton to the body politic of the United States of America have outweighed the ick factor? Yes indeed. Hillary Clinton should, by any reasonable person's standards, be the 45th and first female President of the United States of America.

Yet she's not. And this book, this rah-rah get-out-and-vote book, this catalog of the accomplishments of each and every Democratic administration since FDR, mentions their candidate exactly once. Bill gets more page time. Bernie Sanders gets equal page time: One mention.

Do I really need to say that this is the single most telling fact (pesky things, easier to use "alternative facts" like "she lost because sexism") there is? Hillary Clinton couldn't energize her husband's old kingmaker to warble her praises throughout his book. Permaybehaps his editor at Blue Rider Press struck out the mentions, out of concern that the book would be rendered nugatory in the event of a Sanders nomination. Then why allow the unfavorable mention of Sanders that there is? Why mention Mrs. Clinton at all? It doesn't hang together; I can't see another line of reasoning for not including his whole-hearted partisan support for his girl, given Carville's political and public profile as a plain-speaking straight shooter, unless he...just doesn't really like her. Or he realized that The People don't like her.

I admit that these are equally likely to be my failures of imagination or my personal bias. But as a gay liberal life-long supporter of equality for all, a voter for Jill Stein, whose possession of a uterus was not a surprise to me, and the son of a single mother whose economic struggles in the wake of her divorce were perforce my economic struggles and her victories over them the cause of a great deal of pride for her in me, don't a single goddamned (sorry, Jo) one of y'all women say I'm being sexist in saying the simple truth: Your woman lost, and to a manifestly inferior man, and it had nothing to do with her gender.

In conclusion, let me hustle y'all out the door with a recommendation to read this book for its excellent policy history and for anyone the least bit interested in civil society, go read the Conclusion: Do Facts Matter Anymore? from pp213-222 inclusive. Sit at Hermione's old carrel in the library if you don't want to spend $25 (and had this book been an eight-buck mass market paperback instead, this election might well have gone differently). Let James Carville have his say into your private ear.