BITTER IS THE WIND, love and loss and what life can and cannot do to you 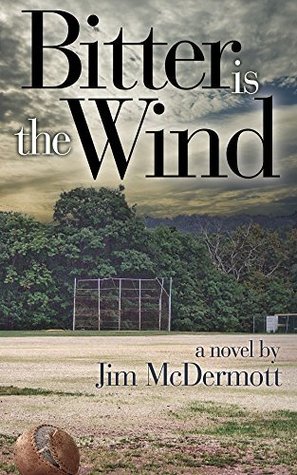 The Publisher Says: Bitter Is The Wind is a coming of age novel that traces the lives of George Johnson, Jr. and his father from the rural blue collar landscape of upstate New York in the 1970s to the halls of Wharton Business School and the heights of Wall Street. After a family tragedy strengthens their familial bond, the Johnsons contend with assembly line monotony, unfulfilled dreams of baseball stardom, and they learn what it means to be tempted, trapped, jailed and ignored by a seemingly uncaring God.

First-time novelist Jim McDermott opens a window on the American working class and its aching desire for financial security, recognition, and respect. His characters confront a modern world with limited possibilities, ambiguous mores, and authorities who seem devoted to keeping the brightest and most talented members of the underclass on the other side of town. Bitter Is The Wind deconstructs the American dream.

My Review: Any book that leads off with the main character remembering the Miracle Mets winning the World Series in 1969 is a shoo-in for my deep affection.

Following the George Johnsons from lows to lowers to heights unimaginable at the beginning is a heady experience. The father fails the son...in both their eyes...but for wildly different reasons. I have a shit relationship with my own father, still living for some unknown but unnecessary reason; George Junior comes to realize how much he owes his father, and how much his father loves him. Bile rose in my throat at that: Sheer tortured jealousy that someone dared to have a father whose love was real, and whom they could offer love to! How cruel to be deprived of any bond of love or respect or even tolerance from or towards my own father.

So already we know McDermott's the real deal. His story is set against the same time as my own life has been lived, and it was very much like revisiting that historical moment when men like George Senior were learning just how hard the system they believed in was fucking them. I don't come from a working-class background, but I can tell you that's how the story was playing out on TV from the Nixon Recession of 1969-1971 to the Oil Embargo of 1973-1974 to the Hostage Crisis and Oil Shock of 1979...through the horrors of the Reagan years...it felt as bleak and as hopeless as McDermott has his characters feel:

A Cadillac approached from the Taconic and stopped in front of the pumps. George Sr stood up and chucked his soda can into the metal trash container. He waved goodbye to his son and walked toward his pickup. "Unemployment's over 9 percent and he's responsible for a whole business," he said to himself.

How proud a man feels when his child, his son, does well! That's doing well, see: Waiting on a guy in a Cadillac as the one running the gas station, not working with rabbits at a lab. That's bleak...but the kid's got a job, the dad's got a job, and they're doing better than millions of others. (Then and now.)

A stupid mistake, being in the wrong place at the wrong time, could have cost George Jr his entire future. It was the Just Say No era, after all, and a drug bust isn't a great thing to have on a resume. But George Jr climbs over the obstacle, by gawd, and he gets himself into Wharton...that's one hell of an achievement...and he gets himself a really good job by the time Reagan's second administration is getting underway. He's Made It. And making it feels...

...about like not making feels. Not great. Not awful. Just not the high of highs you're expecting after the build-up and the work you've had to do. It's great not to have to clean rabbit cages, goodness knows. But...Peggy Lee said it best...Is That All There Is? If that's all there is, my friends, then let's keep dancing.

But there are moments when you get to decide whether you're ready for the Final Disappointment:

George circled around the coffee table, stopping in front of [his boss]. "Nope." George's eyes narrowed. "I'm not going."

"You heard me. Go find somebody else. I quit."

George spun around on his freshly polished shoes. He walked to his office, picked up his jacket, and left the building. On the way back to the subway, he handed the disabled Vietnam veteran a five dollar bill.

And so the boy who made good makes good at last. He learns slowly, this one, but learn he does and he decides he's ready to keep dancing. This time, though, it will be his own tune.
Posted by Richard at 6:30 AM