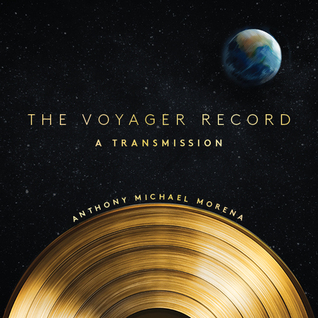 The Publisher Says: Late summer 1977: two identical robotic spacecraft launch from Cape Canaveral. Their divergent paths through the solar system take them past gas giants, icy moons, asteroid belts, and eventually into the unknown of interstellar space. There, they will continue to travel on forever, the fastest moving objects ever created by humans. The Voyagers carry a message from Earth, a phonograph record plated with gold containing 27 songs, 118
images, and greetings in 55 languages meant to summarize all life on our planet for the extraterrestrials who might one day encounter the crafts. The Voyager Record: A Transmission is the record of that record: a history in fragments exploring how legendary astronomer Carl Sagan and his team attempted to press the entire human race into a single groove. Combining elements of poetry, flash fiction, and essay, Anthony Michael Morena
creates a collage of music, observation, humor, and alienation. Giving the 38-year-old original playlist a B-side update, Morena’s The Voyager Record calls out to its namesake across the billions of miles of emptiness: Send more answers.

My Review: Things that aren't what they seem are worrisome to most people. If it's got upright rectangular covers and printed words and no illustrative charts and/or graphs, it's fiction. If there are weird line breaks, it's poetry. If there are pages with one or two lines of text and no pictures, it's incomprehensible pretentious modern poetry.

But The Voyager Record isn't really any of those things. And that's going to bother a lot of people. They don't have a place to slot this square block. How do you read something that introduces you to its concerns and conceits with this mini-essaypoem?

I thought that maybe the Voyager people knew about the quote when they loaded the record the way they did. Or maybe it was the other way around.

When I looked, I didn't find one word about Bach in my copy of The Salmon of Doubt.

Well? Ideas, class? Where are we, reflective essay or prose poem (five-buck talk for "pretty writing that doesn't have to make sense to the likes of you") or narrative fragment that finishes itself off before you're even really going?
Don't get too wound up, there's more:

Now that right there? That stopped me dead for a good two minutes. Voyager left an earth that flat doesn't exist anymore, an earth with rotary-dial phones, microwave ovens the size of your sofa, Cadillacs twenty feet (six-ish meters) fin to fin...cell phones that cost $5 a minute to use in the few places you could use 'em and gasoline was 75¢ a gallon. I hadn't really thought much about that. Yowza, what a world!

Author Morena moves on from blowing old men's minds to the real meat of his meditation. Voyager's on its way to places and encounters that we really and truly cannot imagine. Leaving aside the seemingly endless debate as to whether the dratted thing has made it into interstellar space or is still within some ever-more-tenuously tethered portion of the Solar System, the machine will probably make alien contact at some point. Morena offers this possibility:


The aliens who discover Voyager are a corporate form of life. Like corporate personhood here on Earth, these aliens exist in a non-corporeal, Platonic state: no matter how hard you twist your hands you cannot choke them, they have no necks. They'll appreciate our attempt to raise brand awareness across the interstellar medium. According to the prospectus on the record, Earth is a going concern that will present a low-risk investment. They understand the song lyrics perfectly: "Earnings potential client in a high-yield equity market merger option backed by bond and bundled securities commodity rate. Attractive luxury addition to portfolio G5 champagne blowjobs..."

Hell, if that's all V'ger's a-gonna find, whyinahell'd we send it out there for? Sounds like Washington DC. Or London, or Moscow, or Paris.

Another possibility that occurred to Author Morena:


The aliens who find the Voyager record are a paranoid military culture. The propaganda on the record is seen as an existential threat to their way of life. Some of the alien generals disagree It's not propaganda, they say, it's a trap. Not one of these images shows a weapon of any kind, so it's obviously a trap. Scientists who wish to study the record lose their positions and are thrown in jail. Anyone caught listening to a copy of the Voyager record is considered an enemy sympathizer and detained. When they are released, their identification scans show this black mark in the form of a golden circle next to their names. They have trouble finding jobs, getting into schools. Sometimes, in the middle of the night, someone writes graffiti on their doors: Go Back to Earth! Sometimes, their houses are set on fire.

Again...for this we sent the thing into outer space? Coulda shipped it to Beijing, Jerusalem, Riyadh, Islamabad. Been cheaper, if less exciting, what with all that rocket fuel flaming and all those nerds with bad haircuts and worse glasses jumping around, proving that white people really, really, really shouldn't dance in front of cameras. It was the Seventies, after all.

Further to the "holy gawd when and how did I get so fucking old" moment above, following is another list of things that simply did not exist when Voyager left Earth:


Additions to update the "Sounds of Earth" audio collage: mouse clicks, keyboard typing, a 56k modem connecting to the internet, a Facebook message notification dook. The strange recording of an underwater sound known only as Bloop, which was so loud that not even a blue whale, the largest creature ever to live on the planet, could have created it. Some insinuated that Bloop was made by a massive, Lovecraftian monster. The truth is actually much worse: Bloop is the sound of sea icequakes, as the planet begins to melt.

Bloop is the single most terrifying thing that has happened in my lifetime. I was alive during the Cuban Missile Crisis, the closest we have come yet to mutually assured destruction being put into practice. This is WORSE. This is a sound that indicates we've committed suicide on behalf of all the living creatures now extant.

That should ruin your day.

I haven't got anything uplifting to say after that bitch-slap, sorry. Author Morena offers us some perspective:


You are getting so far away now. Does your distance mean your irrelevance? How the further away you hurtle from Earth, the less you become about us. You will be about another people, not who we are. Faerie elves exist only to supply meaning to words like "flit" and "folk." This is you to us. A boogeyman encased with stellar dirt with a golden eye that, in ideal conditions, sings.

Don't let anyone, anyone at all, not even—maybe especially not—yourself limit your experience of reading, thinking, getting up close and personal with inappropriate thoughts and feelings and people. Don't close yourself off to new experiences in a world ever more hostile to learning and growth.
Posted by Richard at 6:30 AM