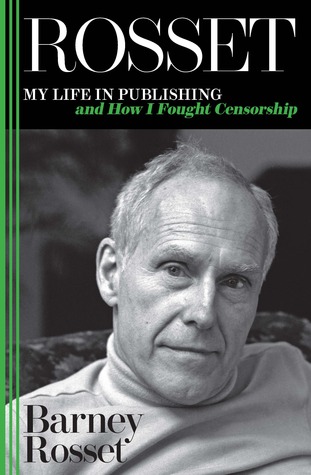 ROSSET: My Life in Publishing and How I Fought Censorship
BARNEY ROSSET
OR Books
$25 trade paper, available now

The Publisher Says: Genet…Beckett…Burroughs…Miller…Ionesco, Ōe, Duras. Harold Pinter and Tom Stoppard. Hubert Selby Jr. and John Rechy. The legendary film I Am Curious (Yellow). The books that assaulted the fort of propriety that was the United States in the 1950s and ’60s, Lady Chatterley’s Lover and The Tropic of Cancer. The Evergreen Review. Victorian “erotica.” The Autobiography of Malcolm X. A bombing, a sit-in, and a near-fistfight with Norman Mailer. The common thread between these disparate elements, a number of which reshaped modern culture, was Barney Rosset.

Rosset was the antidote to the trope of the “gentleman publisher” personified by other pioneering figures of the industry such as Alfred A. Knopf, Bennett Cerf and James Laughlin. If Barney saw a crowd heading one way—he looked the other. If he knew something was forbidden, he regarded it as a plus. Unsurprisingly, financial ruin, along with the highs and lows of critical reception, marked his career. But his unswerving dedication to publishing what he wanted made him one of the most influential publishers ever.

Rosset began work on his autobiography a decade before his death in 2012, and several publishers and a number of editors worked with him on the project. Now, at last, in his own words, we have a portrait of the man who reshaped how we think about language, literature—and sex. Here are the stories behind the filming of Norman Mailer’s Maidstone and Samuel Beckett’s Film; the battles with the US government over Tropic of Cancer and much else; the search for Che’s diaries; his romance with the expressionist painter Joan Mitchell, and more.

My Review: Today is a dark day for me personally. A person I do not respect, in fact one I disrespect with a virulence approaching hatred, is taking the oath of office of the presidency of the United States of America. Appallingly enough, I am required by my conscience to wish this person good health and godspeed because, in the event of his demise, impeachment, or removal from this mortal coil, a worse person will assume the most powerful political office in the country and possibly the entire world.

Barney Rosset, had he lived, would be likely to take some loud and public and effective action in opposition to this horrible eventuality. Barney was a mouthy old bastard. Barney was an opponent of kakistocracy, an enemy of the brummagem and the bloated, overblown, pretentious, and useless in life and art. His life-long battle against the booboisie wouldn't have allowed him to remain silent in the teeth of the gale of poisonous poltroonery emitted by the president elect.

I was only acquainted with Barney for a short while in the 1990s. In the course of my work as a literary agent, his company Foxrock Books published Lo's Diary, a companion piece to Vladimir Nabokov's immortal Lolita. As the book was not a critical success in the US, my company's efforts to vend its paperback rights were unavailing. I'm still saddened and puzzled by this wrong-headed reception by US readers. Be that as it may, Barney's taste as a publisher was on clearest possible display at that point just as clearly as it was when he went to war with the United States Post Office to ensure US citizens legal and unrestricted access to literary greats like Henry Miller and D.H. Lawrence.

Reading this memoir of one of the great iconoclasts of the 20th century was heartening to me in a way I cannot overstate. Barney faced the entire weight of the conservative establishment from the moment he made his first film, Strange Victory, to the moment he relinquished the reins of this life in 2012. He never stopped until he stopped forever. And that, my friends and neighbors, is a fable for me to guide the next four years of my own life. No less a scion of privilege than Barney himself, can I do less than my honored predecessor did in my pursuit of a world more open and liberal than it is? I want to do as much as Barney did, but I can't jump the height of the bar he set. I don't think many people of any age or station can.

I am most definitely inspired to try. I am most certainly heartened to face up to the battle against the gravity of the least and the last and the lowest that is even now doing its dead-level best to make America great at hate again. Or greater at it than it already is.

Buy this book, read it, and take heart from the fact that this battle we face is but one more in a war our elders and betters have fought before us. They succeeded; they failed; they changed and couldn't change and, most important to remember on this dark, difficult day, they did not give up and give in and give way.

Please help everyone, and I mean everyone, even those who don't see it as help, to stand up and stand for that most American of values: Personal liberty.

#ReadingIsResistance
Posted by Richard at 6:00 AM