I've read too many books to believe what I'm told. #ReadingIsResistance 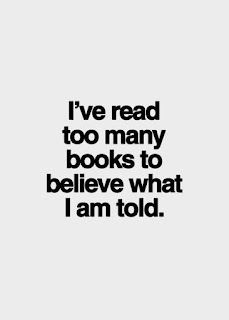 It’s 2017…do you know where your values are? Mine, on this Martin Luther King, Junior, Day are aligned with Dr. King’s as outlined in the "I have a dream" speech. You can find it on YouTube if you've never seen it.

On Friday the 20th, a new administration will formally begin. For many of us this is a tragedy out of Greek drama. It seems to many of us that the gods must be angry with us, have decided to punish us by having the least qualified, most appalling kind of human being sworn in as the leader of our country despite the fact he’ll be in violation of the Constitution he’ll be swearing to uphold from the instant he swears the oath. See the Emoluments Clause for just one, but a very powerful one, of the reasons for this. I don’t know what will happen after this act of treason takes place, but in my fantasies, a bolt of lightning will fry the slab of bacon with his hand on the Bible and the lie on his lips before the oath can be completed. A boy can dream. 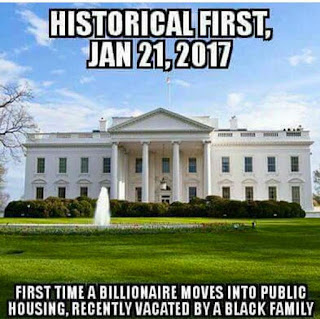 In an earlier post, I outlined my purpose for this year of change: I want to bring the act of resistance to kakistocracy, to scumbagarchy, to the ascendance of the very worst that our beautiful, powerful, gigantically capable country can offer, right down to your head. No one can tell you what to read. No one can tell you how to feel about what you read. No one can (yet) tell you what books, magazines, newspapers, you can own, subscribe to, read on your various electronic devices. The very act of reading is resistance to the authoritarian…and soon to be, in my worried opinion, totalitarian…chants of the opinion influencers sent forth like the Wicked Witch’s flying monkeys in an ever-stronger assault on your independence of thought. 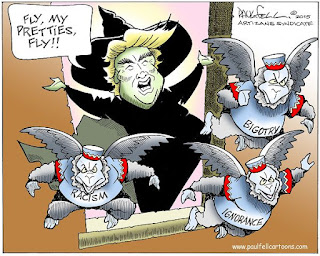 Reading cannot be controlled in the way that watching can be. The act prevents it. Reading is direct communication between a writer and a reader, unmediated by manipulative images or voiceovers, undistracted by advertising messages or unrelated messages in “crawls” across part of the visual field. There is a reason our elites have done their most strenuous best to make reading unpopular: Whatever the message of the author, the reader receives it whole and entire. Many are not able to perceive the didactic purpose of the writer, others misinterpret the message, some simply disagree with what the author is saying. (My Goodreads reviews of the bullshit written by Ann Coulter and the homophobe Orson Scott Card are examples of the latter.) None of this changes the unsafe truth that, once eyeballs receive and brain interprets the written word, the outside world cannot erase and can only in a limited way amend the author’s ideas in the reader’s head.

There is a very, very good reason that freedom of speech and freedom of the press were of great concern to the Founding Fathers. There is a reason that no license to own and operate a printing press has ever been required in the US. To redress the error of “allowing freedom of the press” (take a moment to unpack that…freedom allowed? how is that meant to work, if it’s allowed it can be disallowed and therefore is not freedom…this same headscratching tautology applies to “granting rights”), the Powers That Be determined that broadcasting would be licensed (“to prevent chaos” since there would be no stopping use of any channel by anyone and that would be bad, wouldn’t it) and regulated and controlled. For more than fifty years, those controls required broadcasters to perform civic duties, which led to “Meet the Press” and its ilk; but the Reagan Administration lifted those requirements among a host of others and the snakepit of cable news channels spewing unfair and imbalanced vitriolic lies took less than a decade to form. No licensing agency can enforce standards that aren’t defined, as the standards for news once were. And thus was the liberal majority of the bygone era betrayed by their ideological enemies who came into power at last in the 1980s. 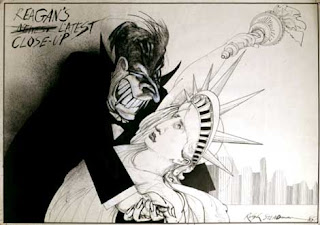 The “vast right-wing conspiracy” as Mrs. Clinton so honestly, but ineptly, named them got the bit in their teeth and began to trample the truth under the cloven hooves of pundits, commentators, talk show hosts “independent” of that new shibboleth, “the Liberal Media.” (What Liberal Media? is an instructive analysis of what actually happened. I recommend it whole-heartedly.) Public trust in the institution Constitutionally protected from legal and official restraint plummeted as the endless lying bullshit flew at them from every direction. The onslaught was coordinated, as the perspective of hindsight demonstrates with blinding clarity. And it was unstoppable because it was not from any official source; it was not a conspiracy because it is not illegal to organize a campaign of words that is not criminal in its nature; and it was, therefore, wildly successful. A knife was applied to the throats of opposing pundits, very frequently academics and intellectuals, as the eternal US suspicion of intellectuals was fanned to a white heat and the efficacy of public education was pumped full of hot air to delegitimize academia and therefore academics daring to speak against the unfolding authoritarian dumbing-down of a population primed to find fault with a system stacked, blatantly and undisguisably, against them. A bit of distraction, a lot of misinformation, titanic waves of misdirection funded by people with oceans of money and rip-currents of purpose, and one dupe to lead them all: Here we are. 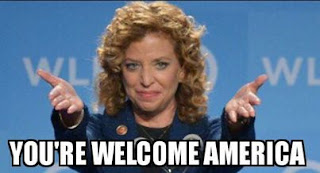 It felt to me, as I watched this debacle unfold before my disbelieving eyes, hopeless and unstoppable. It has proven to be unstoppable. Nothing is hopeless. Hope is internal. Hope is generated from within, not received from without. That simple truth saved my sanity in the aftermath of the first Russian candidate for the US presidency becoming the president elect.
Hope comes from within; words come from without. How can reading grow hope? The only place you can ever put your money that no one can take it away from you is inside your head. Education, formal or not, happens when you read. Whatever you choose to read, two things are inherent in the act: You are the sole actor, yours is the choice that can’t be compelled, yours the ideas that come from reading the words. Any words. Novels, plays, encyclopedias, comic books, biographies, essays, magazines, websites, satires. It does not matter. YOU selected the reading material. YOU read it. YOU grew your own thoughts inside your own head after reading it.

All of my reviews for 2017 will be about the act of resistance. I read something. I chose it. I resisted the shouts and the screams and the distractions and I fed my head. I want you to do the same thing. I’ll tell you about the things I read and I hope you’ll want to read at least some of them. But even if you’re not interested in a single book that I review, I want you to realize something that applies to you as well as to me: If an old poor disabled guy who can’t march in protests, can’t go to meetings, can’t give to worthy causes, can resist the tsunami of terror, so can you. Read a book. Tell everyone you can reach what you read. Your very act of reading resists the drumbeat of dumbing-down, of getting inside your head by making so much noise that you can’t form a thought for yourself. Tell everyone you can reach, every time you can reach them, how you claimed your head for yourself and how they can too: 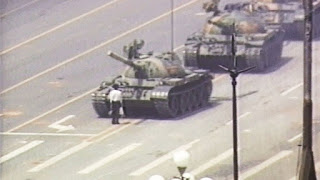