SNOWBALL'S CHANCE, the dystopia of ANIMAL FARM gets worse 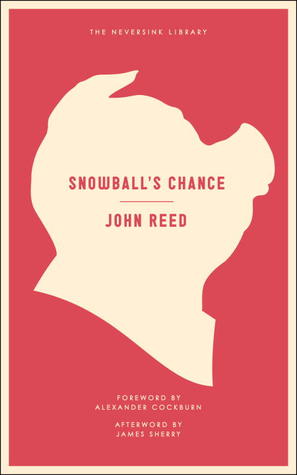 The Publisher Says: This unauthorized companion to George Orwell’s Animal Farm is a controversial parable about September 11th by one of fiction’s most inventive and provocative writers

Written in 14 days shortly after the September 11th attacks, Snowball’s Chance is an outrageous and unauthorized companion to George Orwell’s Animal Farm, in which exiled pig Snowball returns to the farm, takes charge, and implements a new world order of untrammeled capitalism. Orwell’s “All animals are equal, but some animals are more equal than others” has morphed into the new rallying cry: “All animals are born equal—what they become is their own affair.”

At first Snowball’s regime prospers: heated stalls, running water, and a window for each animal. The farm moves away from its agricultural economy as Snowball and his team of educated Goats recreate Animal Farm as Animal Fair, replete with citizen performers and criminal sideshows.

A brilliant political satire and literary parody, John Reed’s Snowball’s Chance caused an uproar on publication in 2002, denounced by Christopher Hitchens, and barely dodging a lawsuit from the Orwell estate. Now, a decade later, with America in wars on many fronts, readers can judge anew the visionary truth of Reed’s satirical masterpiece.

My Review: Fifteen years on, Snowball's Chance is more relevant than ever. The 9/11 attacks appalled the world, and thereby gave the USA (assuming its leaders had been savvy and swift on the uptake) its single best opportunity to cement cooperation and common cause with our self-serving agenda in recent history.

We all remember how that turned out. Our soldiers are still paying the price for the bad-to-the-point-of-idiocy decisions made by the administration of the day.

But oh my my, it wasn't sold to the sheep—people, I mean—that way! Neigh neigh neigh, as the workhorses of the armed forces emitted. The glory days have begun at last! We'll shock and awe those sand-n-words back to the stone age!


The animals, even the pigs and the dogs, reveled in the song—not only in the group dancing, which was a new experience for all, but to have their voices joined together once again.

And the thing so nice about it, was that now, with no more than a little song and a side-step, they could feel like this whenever they wanted—even when they were working in the fields!
It was then announced by Snowball, that by the Prize Pig's decree, the Manor Farm would henceforth be known by its proper name—

And the strains of the 21st century's first recrudescence of Horst Wessel were heard throughout the land. The Prize Pig squealed it loudest. And behind the Prize Pig stood Snowball, quietly examining the trusting mugs of the great unwashed masses for glimmers of intelligence and signs of dissent. These were bad things, unpatriotic things, to be subdued by every means available to the state. And those means were (and are) considerable, technology having no conscience and technologists little interest in ethics. All that was needed now was some sort of fig leaf to hide the swollen cock butt-fucking the body politic with no grease and not even a pretense at a kiss.

The USA-PATRIOT Act. Mass surveillance, suspended civil liberties, immense extensions of the government's power to act against its citizens if it damned well wanted to...amended, killed, then resurrected as the USA FREEDOM Act in 2015. No government ever gives up a power it has given itself. The names are changed to protect the guilty.


The debate was reported at length in The Daily Trotter, where Minimus, in his sudden November turn-around, proclaimed that the concessions Snowball had made to his various concerns were more than enough to allay any fears. His faith in Snowball was complete—and every animal on the farm should feel exactly the same way. "Forward Ho!" proclaimed The Daily Trotter. In a letter-to-the-editor (penned by an excitable field mouse), it was suggested that Snowball was not forceful enough to capture the character of the visionary, and that perhaps "Snowstorm" would be more appropriate. The next week, Minimus showed up at the Sunday Meeting looking like he had sat on a fretful porcupine. The Trotter reported that he was suffering a case of constipation....

Hot water and air conditioning buy a lot of silence, it would seem; as does the saddling of an entire nation with slave status under the yoke of the banksters. Get stroppy, get fired, get foreclosed on. I know this happens, it happened to me in 2005.

But the fable continues its inexorable course, one that we're familiar with from the 9/11 events but apparently haven't got the mother-wit to recognize happening again in the form of the most recent election's run-up and results. The post-mortems and the mea-culpas will last for years. None of which changes the events:


It would later be argued as to whether the evil-doers had secured preplaced weaponry from a passing peanut cart, or had foiled the bloodhounds by dousing themselves and their arsenal in apple-wood oil, in order to mask any tell-tale odor. But regardless of the method that his treachery had taken, this ferret's time had come....

He had drawn his blade, cut the throat of Arthur the Poodle, and assumed the controls of the Ferris Wheel—and before anyone could understand what was happening (was it part of the ride?) the Ferris Wheel had accelerated to its top speed. Gears ground. Sparks flew. And two pairs of squirrels were dragging paper bags through the ironwork—up to the axle that held the wheel in place. And then, in a moment horrifyingly lucid, the squirrels doused themselves with some greasy liquid, and set themselves on fire. The bags exploded, and the Ferris Wheel was loosed—kicked from its moorings.

From there, the Twin Mills were struck down and the Woodland Creatures exacted their vengeance on the Pig Fair. And the fable ends.

The future doesn't, however. The value of fiction is that it doesn't stop being relevant when its inspiration recedes into memory then fades into myth. To Kill a Mockingbird is still challenged for removal from school curricula and libraries. Young people are, if not encouraged, then allowed to piss and moan about its "relevance" as a means of delegitimizing the book's enduring and invaluable lessons of the costs of Doing the Right Thing even when everyone you know shouts you down. There's no reason to suspect a book that features a flinty, honorable fighter for justice and the daughter who worships his ideals wouldn't be popular with a political elite such as the one we have now, is there?

My review of Animal Farm argues for the continued relevance of a parable of corruption's eternal depredations. The book isn't about Stalinist Soviet times. It's about the time-tested maxim that power corrupts, and absolute power corrupts absolutely. Snowball's Chance tills the same fertile soil. John Reed saw the need for a stern reminder of the eternal verity that people are no damn good, and wisely chose to "stand on the shoulders of a giant," to paraphrase the probably apocryphal utterance attributed to Isaac Newton. George Orwell was no monadnock of probity: he's known to have snitched on leftist friends, expressed privately an anti-Semitism he didn't condone publicly, and was a homophobe. Hardly a role model. Except he was right about the very important fact that Stalin was a monster and the left of his time was willfully ignoring the truth in order to preserve what they saw as a greater good: Socialism was a laudable political path and socialists must needs be lauded.

Hogwash. No more does John Reed accept the moral purity of Snowball, or of Minimus, or of Diso the beaver. He and Orwell jab at the clay feet of the idols that are used to distract the bulk of humanity. The idols fall as they may, and that's a good thing. That's the reason Snowball's Chance needs to land on your TBR. Never miss a chance to topple an idol, even—or especially—one of your own.
Posted by Richard at 6:30 AM