AND AFTER MANY DAYS, debut Nigerian novelist tells personal/political tale of loss 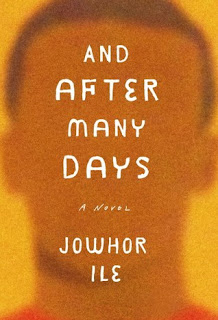 The Publisher Says: During the rainy season of 1995, in the bustling town of Port Harcourt, Nigeria, one family's life is disrupted by the sudden disappearance of seventeen-year-old Paul Utu, beloved brother and son. As they grapple with the sudden loss of their darling boy, they embark on a painful and moving journey of immense power which changes their lives forever and shatters the fragile ecosystem of their once ordered family. Ajie, the youngest sibling, is burdened with the guilt of having seen Paul last and convinced that his vanished brother was betrayed long ago. But his search for the truth uncovers hidden family secrets and reawakens old, long forgotten ghosts as rumours of police brutality, oil shortages, and frenzied student protests serve as a backdrop to his pursuit.

In a tale that moves seamlessly back and forth through time, Ajie relives a trip to the family's ancestral village where, together, he and his family listen to the myths of how their people settled there, while the villagers argue over the mysterious Company, who found oil on their land and will do anything to guarantee support. As the story builds towards its stunning conclusion, it becomes clear that only once past and present come to a crossroads will Ajie and his family finally find the answers they have been searching for.

And After Many Days introduces Ile's spellbinding ability to tightly weave together personal and political loss until, inevitably, the two threads become nearly indistinguishable. It is a masterful story of childhood, of the delicate, complex balance between the powerful and the powerless, and a searing portrait of a community as the old order gives way to the new.

My Review: This is a beautifully written novel. It is, if other commenters are to be believed, poorly or simply un-structured. I don't agree with this assessment. I see the author's structure as like that of life itself: Free-floating, connected and interconnected and bound tightly and tenuously, resembling nothing so much as a kaleidoscope. Structure and pattern are artifacts of observation. Hey, life is an emergent process of quantum energy. Or some such.

By setting the novel in 1995 Nigeria, the author enables the reader to participate viscerally in the rite of passage that is civil war. It is painful when viewed whole; it is mundane when lived through. Dinner is still cooked, even if it's over an open fire; bedtime still comes for all the young children, even if it's accompanied by gunshots and missing relatives. It was a crisis point for the anti-imperialism trying to stop the economic looting and environmental destruction of international oil companies that persist in Southern Nigeria to this day.

Children see this, like everything else, with pitiless clarity and unsparing judgment:


Things happen in clusters. They would remember it as the year the Mile Three ultramodern market burned down in the middle of the night… It was the year of the poor. Of rumors, radio announcements, student riots and sudden disappearances. It was also the year news reached them of their home village, Ogibah, that five young men had been shot dead by the square in broad daylight.

None of it makes sense or creates a pattern. Yet.

Family is completely unique in the eyes of each member. It's a funny (sense ha-ha, and sense hmmm) truth that the social group that forms each member's similar and different qualities, ideas, opinions is utterly unique and unknowable to each other member:


Before the beginning of his memory, which was to say from the beginning of this life, there had always been the three of them. Paul and Bibi were the first people he saw, the first he touched. Everything he resented and liked, everything he knew, thought and felt, his smile and the angry pounding in his veins were all from them, and now, for the first time, taking notice of this made him feel incredibly lonely. The sort of lonely feeling that Bibi would have been tempted to slap out of him. Just the kind of thing that would have made Paul look at him in his usual bemused way and say, 'My friend, what are you saying? Please be serious'. But he sensed it that night, it hung about the room, the feeling that things may not always be like this, that they would one day grow up and live across town from each other like Ma and her cousin Aunty Julie or even die like all of Bendic's siblings whom he hardly ever spoke of. Paul turned around in his bed, the distant drumming had stopped, and mumbled something in his sleep, and Ajie was sure he could hear Bibi softly breathing from the room next door.

How does a younger sibling explain this sense of the fragile reality of family and life to an older one already interested in bigger things, smaller in importance to you just now, but much more immediate and pressing to their eyes?

Paul is a fine young man. Paul is a good soul. Ajie, locked in mortal combat with his closer sibling Bibi, senses the gulf between himself and Paul as unbridgeable. Of course he sees it that way, childhood and adolescence are by definition this life's perspectiveless passages:


Now, this was what Ajie wanted, this way that Paul had of becoming something after he had read about it; this way he had of claiming things for himself. He had joined himself to a we, an us. A corrupt official had been exposed in the papers for misappropriating pension funds, and Paul was expressing betrayal, even anger, about it.

How do you make yourself do that? How do you learn how to work yourself up over something that's not directly your concern?

Poor Ajie, having a lifetime of living in a big brother's big shadow. And one just enough older to make a big difference in your world! How can he know that one fine day he too will understand and opine upon the matters of a world that, now anyway, is so much wider than your own as to be imperceptible to you?

But a sibling's world isn't the only one that a family has to contain. A mother's, a father's, existence is tied to the permanent creation of this temporary life. Structure exists because we summon it into being, and we do so with the materials we have, the ideas we grab from...anywhere, I suppose...and the living energy of the beings around us:


They have waited many years for an answer, and one has finally arrived, dry and diminished, resting inside the box before them, and not one of them in the room knows how to approach the coffin. Ajie feels it's his place to take the lead; he steps forward to the casket and opens it. When Ma draws close, he holds her hand while Bibi looks in from the other side of the casket. He holds Ma's hand tight but can still feel the tremor running through it. These bones formed inside her, Ajie thinks.

The surprise, for me at least, in the aging process...I'm older than most of the world's people will ever get to be...is how banal agony becomes. It is no less sharp or debilitating. It is simply part of the scenery, an item of furniture that serves no positive purpose but sits in exactly the place it is most likely to bark your shins or stub your toe. Of course Ma is in exquisite agony: She is looking at bones that grew inside her. Mothers...parents...are now in tears, in silent screams, in deepest possible denial. No one should know what their child's death looks like. It is asking too much of a human soul to bear this. But it happens every single minute of every single day that God sends.

Agnosticism is logic. Atheism is visceral certainty that no higher power could demand this of her creation.

This sentence sums up the only way many of us who have lost that deeply keep moving, breathing, functioning at whatever level we are able to summon:


The dead will not be consoled; neither will those who live in the skin of their dead.