THE FABRIC OF REALITY, twenty years on, presents the Multiverse argument clearly and concisely and still freshly 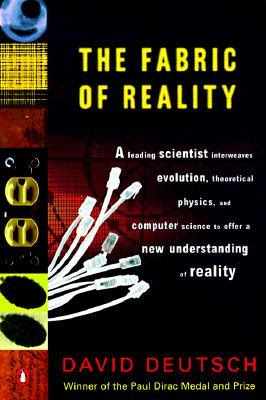 The Publisher Says: For David Deutsch, a young physicist of unusual originality, quantum theory contains our most fundamental knowledge of the physical world. Taken literally, it implies that there are many universes “parallel” to the one we see around us. This multiplicity of universes, according to Deutsch, turns out to be the key to achieving a new worldview, one which synthesizes the theories of evolution, computation, and knowledge with quantum physics. Considered jointly, these four strands of explanation reveal a unified fabric of reality that is both objective and comprehensible, the subject of this daring, challenging book.

The Fabric of Reality explains and connects many topics at the leading edge of current research and thinking, such as quantum computers (which work by effectively collaborating with their counterparts in other universes), the physics of time travel, the comprehensibility of nature and the physical limits of virtual reality, the significance of human life, and the ultimate fate of the universe. Here, for scientist and layperson alike, for philosopher, science-fiction reader, biologist, and computer expert, is a startlingly complete and rational synthesis of disciplines, and a new, optimistic message about existence.

My Review: I report that The Fabric of Reality by David Deutsch is simply wonderful. Clear, well-turned prose, ample illustrative examples of his points, and a beautifully thought-out explication of the bizarre nature of reality as explained in the far reaches of physics. The fact that Richard Dawkins is cited as an inspiration for Mr. Deutsch's work should forewarn the spiritual seekers in the audience to avoid this book at all costs. It takes a very clear stance against there being a supernatural agency in the workings of the Multiverse.

Instead, Deutsch says that the Multiverse is weird enough to contain answers to all questions couched in numinous terms and to explain all phenomena and experiences the species has filed in the "supernatural" bin. His arguments are presented without condescension or hectoring, which is a common failing in the prose that wishes to "debunk" the spiritual experience. He simply explains how the experiences fit into the framework of the Multiverse. From there, he says, it's up to you the reader.

THIS is an attitude I can endorse and enjoy. I dislike the spiritual imperialism that says, "My way is Right and all others are Wrong," and equally dislike the materialist dogma that "There IS no spiritual and those who imagine there is are deluded and foolish." (I reserve that dismissive and rejecting locution for religion, not the spiritual, as they are unrelated things.) I want the arguments presented and then leave it up to me to decide what to do with the information presented. Please don't do my thinking for me! And that, laddies and gentles all, is what I feel Mr. Deutsch makes an overall successful stab at NOT doing. He favors the material explanation, and makes no bones about it; but he is very reasonable and reasoned in his advocacy, not shrill or hectoring.

A well-done work of enduring value in the cultural conversation about the nature of reality as we find it. And for reasons that I can't understand, not a gigantic bestseller. I hope that will change....
Posted by Richard at 6:30 AM