THE COUNTRY OF THE POINTED FIRS, a local-color author's portrait of changing times 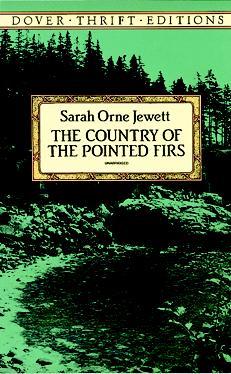 The Publisher Says: In scene after memorable scene of Sarah Orne Jewett's fictional masterpiece, The Country of the Pointed Firs, the Maine-born author recorded what she felt were the rapidly disappearing traditions, manners and dialect of Maine coast natives at the turn of the 20th century. In luminous evocations of their lives--a happy family reunion, an old seaman's ghostly vision, a disappointed lover's self-imposed exile and more--Jewett created startlingly real portraits of individual New Englanders and a warm, humorous and compassionate vision of the New England character.

My Review: There aren't all that many loud, public admirers of Sarah Orne Jewett's fiction. Willa Cather, she of Death Comes for the Archbishop fame, was an admirer, but that's most of a century ago. I think that's too bad. Jewett's lovely, lapidary prose is a treat. She's more than likely a gay lady, given her "Boston marriage" *snort* to Annie Adams Fields from 1881 until her death in 1909. That makes enjoying her work incumbent on me, I suppose, though I can honestly say that I've enjoyed her way with words and her sharply observed and economically told tales since I found out about her in high school forty years ago. This novella is, in my never-remotely-humble opinion, one of the nineteenth century's literary high points, right up there with Silas Marner and The Aspern Papers.

From the minute our narrator addresses us, the tone and the tenor are set:


When one really knows a village like this and its surroundings, it is like becoming acquainted with a single person. The process of falling in love at first sight is as final as it is swift in such a case, but the growth of true friendship may be a lifelong affair.

We are launched on a voyage of discovery in love. We have as our captain a lady of a certain vintage, not old and not young, who is hiding in Dunnet Landing, Maine, in order to meet her publishing deadline...which she has already blown past, as she tells us early on. Her landlady Mrs. Todd has presented her with to tempting a distraction as she tantalizes the narrator with reminiscences of her long-ago lost love and his subsequent marriage, her subsequent marriage....

And then, after the narrator moves her workspace to the local schoolhouse (it being summer, the building is unused) to reduce interruptions and avoid gossiping time-sinks, comes the fascinating old man, Captain Littlepage, to tell his own love story:


"It was a hard life at sea in those days, I am sure," said I, with redoubled interest.

"It was a dog's life," said the poor gentleman, quite reassured, "but it made men of those who followed it. I see a change for the worse even in our own town here; full of loafers now, small and poor though 'tis, who once would have followed the sea, every lazy soul of 'em. There is no occupation so fit for just that class o' men who never get beyond the fo'cas'le. I view it, in addition, that a community narrows down and grows dreadful ignorant when it is shut up to its own affairs, and gets no knowledge of the outside world except from a cheap, unprincipled newspaper. In the old days, a good part o' the best men here knew a hundred ports and something of the way folks lived in them. They saw the world for themselves, and like's not their wives and children saw it with them. They may not have had the best of knowledge to carry with 'em sight-seein', but they were some acquainted with foreign lands an' their laws, an' could see outside the battle for town clerk here in Dunnet; they got some sense o' proportion. Yes, they lived more dignified, and their houses were better within an' without. Shipping's a terrible loss to this part o' New England from a social point o' view, ma'am."

Shipping...anything that takes a person out of a narrow area of interest...is a terrible loss for the world's average people. We have the internet now, thus we have almost instantaneous access to information and news and opinions from every corner of the globe. But we don't have any particular reason to seek it out, since the fact is most Americans are un- or underemployed compared to generations gone by, and thus are unlikely to seek beyond the dark alleys of CNN and Fox "News" for news and views on world and national events. With the inevitable bad results.


"No, there's nothing to take the place of shipping in a place like ours. These bicycles offend me dreadfully; they don't afford no real opportunities of experience such as a man gained on a voyage. No: when folks left home in the old days they left it to some purpose, and when they got home they stayed there and had some pride in it. There's no large-minded way of thinking now: the worst have got to be best and rule everything; we're all turned upside down and going back year by year."

"Oh no, Captain Littlepage, I hope not," said I, trying to soothe his feelings.

There was silence in the schoolhouse, but we could hear the noise of the water on a beach below. It sounded like the strange warning wave that gives notice of the turn of the tide. A late golden robin, with the most joyful and eager of voices, was singing close by in a thicket of wild roses.

Ladies and gentlemen, everything old is made new again. Captain Cassandra Littlepage sings a lament at the end of the nineteenth century that many of us have been reprising here in the twenty-first. Or, as the old Frenchman had it, "the more things change, the more they stay the same."

After a lovely summer outing to Green Island, in the bay off Dunnet Landing, Mrs. Todd welcomes to her herb-gardeny home an old friend, a Mrs. Fosdick. The narrator and Mrs. Todd have now the extra-strength bonding compound of family approval. Green Island is home to Mrs. Todd's mother and younger brother, a wight of some sixty summers; both the Blacketts of Green Island love the narrator as soon as she steps ashore from the dory, and she them. Into this mutual admiration society steps Susan Fosdick, contemporary of Mrs. Todd, and plants herself for a long afternoon's gossip. When you've known someone all your life, the words come easy if they need to come at all:


It does seem so pleasant to talk with an old acquaintance that knows what you know. I see so many of these new folks nowadays, that seem to have neither past nor future. Conversation's got to have some root in the past, or else you've got to explain every remark you make, an' it wears a person out.

Jewett's gift is to limn a lovely scene against a delicately scented and lit background. It is a great deal like that rooted-in-the-past conversation that is so relaxing and welcome, reading this...and her other...work. Direct and unfussy. Lovely and simple. A vase of daisies on a linen cloth, not a candelabra gleaming over a cornucopia of pineapples on fine lace...each beautiful, one way or the other.

I believe that the pleasures of reading a novella are as rich and gorgeously textured as any novel's are. The difference, for me at least, and in the instance of this novella, comes down to the writer's ability to evoke a place, a time, a season, a slant of light; at greater length, her strength could become a weakness, a surfeit, when piled on a larger plate. As it stands, though, this serving is a beautifully balanced, perfectly presented summer picnic on the cool, seaside meadow of a Maine island. Your eyes and ears and nose all attune you to a simple pleasure, a familiar scent, a welcome patch of emotional shade in a hot summer of life.


In the life of each of us, I said to myself, there is a place remote and islanded, and given to endless regret or secret happiness; we are each the uncompanioned hermit and recluse of an hour or a day; we understand our fellows of the cell to whatever age of history they may belong.