FOOL ME TWICE, a truly scary look at the organized, cynical, and disturbingly effective war on science...all kinds of science 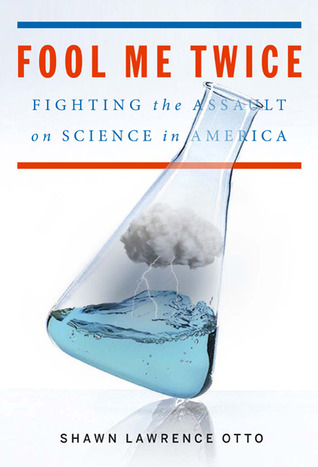 Will the media save us? Don't count on it. In early 2008, of the 2,975 questions asked the candidates for president just six mentioned the words "global warming" or "climate change," the greatest policy challenge facing America. To put that in perspective, three questions mentioned UFOs.

Today the world’s major unsolved challenges all revolve around science. By the 2012 election cycle, at a time when science is influencing every aspect of modern life, antiscience views from climate-change denial to creationism to vaccine refusal have become mainstream.
Faced with the daunting challenges of an environment under siege, an exploding population, a falling economy and an education system slipping behind, our elected leaders are hard at work ... passing resolutions that say climate change is not real and astrology can control the weather.

Shawn Lawrence Otto has written a behind-the-scenes look at how the government, our politics, and the media prevent us from finding the real solutions we need. Fool Me Twice is the clever, outraged, and frightening account of America’s relationship with science—a relationship that is on the rocks at the very time we need it most.

The most unnerving reality in today's social, political, and educational reality is that science, which you are benefiting from this very second as you read this review on the internet, is underfunded, undertaught, and underapprecitaed by the people of the USA and their political overlords. The reason for this is that an insane religious know-nothingism has infected the Body Politic with a conservative (in the worst possible meaning of that never-good term) resistance to accepting reality as it is, instead of how one fancies it should be. This book quantifies the horrors on their way down the pike as this horrifying metastatic stupidity continues unchecked and even promoted by the small-souled fear-mongering Yahoos, in the original Swiftian sense, who shout and rail and spew on Fox "News" and the related echo chambers. The author explores some psychological mechanisms of belief as it relates to the acceptance of authority, which really helps illuminate why the doomsday warnings about ignoring climate change only seem to make the religious authoritarians more resistant to the mounting—burgeoning!—evidence of its current reality. Otto then provides specific suggestions that could lead to more effective ways to address the concerns of these people, allowing for a rational debate and increasing the likelihood that some kind of useful agreement could be reached:


"When a person holds a belief, especially a strong one that is linked to important values (e.g. some sociopolitical beliefs), information threatening that belief creates inconsistency in the cognitive system that threatens one's self-image as a smart person. This produces an unpleasant emotional state." That belief resistance—and this is a critically important point—is largely coming from the adult ideological worldview. This is why education is political in the first place, and why the children of scientists are the most likely next generation of scientists—and effect that is slowly striating society into knowledge haves and have-nots and can only increase partisanship along science lines.

This book is exactly as tendentious as my book report is. If you don't already agree with its premise, then you're unlikely to consider picking it up. Which is a pity, in my view. For those of us who already agree, this acts either as a call to arms, or a horribly depressing reminder of how the New Dark Ages have already begun. For make no mistake: Stupidity has more gravity than intelligence, and hate has more brightness than enlightenment. Science has proven too many times that mass and heat always win for me to have any significant hope that Good will triumph over Willful Ignorance:


Espousing the anti-science argument, that the lack of absolute certainty that something is true is grounds for inaction or doubt, or that we should hear out all perspectives equally, is evidence of either a lack of understanding of reason or motivation by an unreasonable agenda. Such people should not be trusted with making decisions that will have serious impacts upon others.

Please prove me wrong. Read this book and get energized to fight the Yahoos. Please. We must try to re-establish science as the basis for increasing American freedom and for providing a solid foundation for the future. We are no longer in an age where just one more coal-fired powerplant or one more high-tech deep-sea trawler that ravages ecosystems we know nothing about won't make an impact on the ancient concept of the “common property of humankind.” I am appalled at the stupidity and/or greed of politicians and those who voted for them who fail to understand this universal benefit argument that "[t]he evidence shows that successful regulations that define a fair trade in the commons do not reduce freedom, they increase it."

That dream, that beautiful vision of a planet run for the best possible results of our individual actions resulting in a healthy world for all of its people, has always been a motivating factor for the bulk of the scientists I've known personally or known of professionally. How much more elegant it is to imagine a world with intact ecosystems that offer the humanity we create abundantly and thoughtlessly sustenance, health, a future as good as or better than the present:


In the end this is what matters most: the beauty. It's why scientists do science: to apprehend the great beauty of nature. They are Puritans, four hundred years hence, with more data, but still searching for that direct communion with wonder an the aesthetic. In this way science is not unlike art or religion. In fact art often anticipates and reflects the forms science discovers, as does religion. Science is much bigger than just solving challenges, as important as they are. It is about who we are as human beings, about or ability to love, to wonder, to imagine, to heal, to care for one another, to create a better future, to dream of things unseen.