THE LONG SHADOW OF SMALL GHOSTS, an incredible story of failure and murder 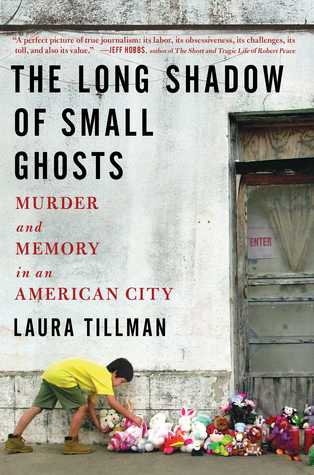 The Publisher Says: In Cold Blood meets Adrian Nicole LeBlanc’s Random Family: A harrowing, profoundly personal investigation of the causes, effects, and communal toll of a deeply troubling crime—the brutal murder of three young children by their parents in the border city of Brownsville, Texas.

On March 11, 2003, in Brownsville, Texas—one of America’s poorest cities—John Allen Rubio and Angela Camacho murdered their three young children. The apartment building in which the brutal crimes took place was already rundown, and in their aftermath a consensus developed in the community that it should be destroyed. It was a place, neighbors felt, that was plagued by spiritual cancer.

In 2008, journalist Laura Tillman covered the story for The Brownsville Herald. The questions it raised haunted her, particularly one asked by the sole member of the city’s Heritage Council to oppose demolition: is there any such thing as an evil building? Her investigation took her far beyond that question, revealing the nature of the toll that the crime exacted on a city already wracked with poverty. It sprawled into a six-year inquiry into the larger significance of such acts, ones so difficult to imagine or explain that their perpetrators are often dismissed as monsters alien to humanity.

With meticulous attention and stunning compassion, Tillman surveyed those surrounding the crimes, speaking with the lawyers who tried the case, the family’s neighbors and relatives and teachers, even one of the murderers: John Allen Rubio himself, whom she corresponded with for years and ultimately met in person. The result is a brilliant exploration of some of our age’s most important social issues, from poverty to mental illness to the death penalty, and a beautiful, profound meditation on the truly human forces that drive them. It is disturbing, insightful, and mesmerizing in equal measure.

***I RECEIVED THIS REVIEW COPY FROM SCRIBNER AT MY REQUEST. THANK YOU.***

My Review: There is absolutely nothing easy about this book, not the story, not the agonized survivors, not the innocent dead children, nothing. I read In Cold Blood many years ago, and was very deeply affected by the story. The amazing writing, the very best thing Truman Capote ever made, seems suspiciously good...like Harper Lee, his cousin and collaborator, was a very very significant part of its creation. Laura Tillman touches me in many of the same places that In Cold Blood did, but she had no Harper Lee to wave the magic wand of genius over the text.

The genesis of the book came when Tillman began her journalism career at The Brownsville Herald, the big English-language newspaper of the Rio Grande Valley. A murder such as the Rubio case doesn't happen that often in the rinky-dink precincts of that rathole. (I spent formative years forty or so miles away in Mercedes, Texas, a horrible little wide spot in the road that exemplifies what city people never see and avoid even hearing about if they can help it.) Tillman describes her fascination thus:


The Rubio story was also especially affecting because it concerned small children. It grabbed hold of the reporters during these newsroom conversations, the revelation of each detail making the case suddenly raw, fresh, intense. A father and a mother killing three young children—three babies!—with the crude weapon of kitchen knives. The bodies in trash bags, the heads in buckets of water, washed clean of blood. For not one but both parents to be involved in such a horror was stunning and inexplicable.

A mentally ill, psychologically abused, sexually pimped out by his mother, young man of good looks and no significant intellectual capabilities, gets hooked on drugs...self-medicating, in my opinion...finds and clings to a balsa-wood raft in the form of a pretty, even less intelligent girl-child who was being abused by a variety of men in her life. Hey presto! Children arrive, work doesn't, help ain't, and huffing paint is the only road to some tiny moment of pleasure. A lifetime of psychological disturbances, seeing people not visible to others, obsessions and violence, just don't merit institutional help. Especially in a place like Texas, where Medicaid is out of reach to anyone not licking the asphalt in the hospital parking lot to avoid starvation. It is disgusting what is NOT done with the Federal dollars sent to help the citizens of the state.

At the moment of John Rubio's massive psychotic break, this is what he reports believing:


According to John, something told him that killing the children was imperative, that he was engaged in a battle of good and evil, and he was on the side of good. He said that he had long seen himself as exceptional, chosen by God for some purpose, and had dreams where he battled demons. Where those thoughts and the message to kill his children came from is debatable, but John said he believed at the time that it was divinely sent. Regardless of whether the culpable influence was psychosis or a spiritual force, there was no contradicting intervention at the final moment.

The source of Tillman's meditation is the story of Abraham and Isaac in the Bible. It is one of the more appalling, disgusting passages in a book chock-a-block with horrible bar bets (eg, Job's trials set on him by God to win a wager with Lucifer) and reprehensible narcissistic tantrums (eg, destroying the whole of the world in a flood because his itty fee-fees was hurted by...what, I can't remember, something like impiety?). John's religious mania had been life long, and somehow no one anywhere connected to this case sees or says they see the central and vile role that this God person and the stories told to impressionable children about him played in this nightmare crime.

A friend of Angela and John's explains the bitter, scalding, bone-rattling terror of desperation.


"But when a difficult time comes and nobody helps you, no one listens to you, they leave you alone...I don't know how to explain it...You go to your neighbor's house and ask if they could lend you three dollars to eat and they say they don't have it. You go to another [neighbor] and they don't have it, no one has it. You're frustrated and you have hungry children. And you kill them. That's how people think."

You cannot know the power of desperation, Felix was saying, until you experience it in its raw form. Desperation can fuel acts that would otherwise be incomprehensible. And if you've never been filled with that kind of quaking, hysterical desperation, you simply cannot fathom the way it can make you behave.

Yep, been there. Try living at the complete legal, social mercy of a screaming emotional volcano, abusive in inventive and creative ways, who makes up to you with sex. And I was her son. I have been down there. I understand John's insanity from the inside, though blessedly I'm smart and almost incredibly tough so I survived. Just. John had none of my strengths, poor lad, and he cracked wide open. What he did can't be fathomed by the normal mind. The key words there are "normal mind." He didn't have, and never had, one of those. The State of Texas, in its rednecked viciousness, condemned this poor, broken, horrible person to die. To do what? To solve what? In order to serve what noble legal principle? We already know the Christians who argue for the death penalty are merely emulating their vile petty god, so can safely be discounted as moral forces.

Angela was represented by a court-appointed lawyer whose unique perspective on the central facts of Angela's participation in the murders probably served her in great stead:


In May of 2008, five years after John and Angela were arrested, Gamez said he saw demons for the first time. "I didn't imagine it." Gamez had suffered a heart attack that left him legally dead for several minutes, and in a coma for six days after that. "There is no rational, logical medical explanation, other than the grace of coming back and giving me a second chance." To him, the demons are not a vague vision, but a specific memory.

"They were compelling to take me to hell. They were reaching out. They wanted me but they couldn't get me. The grace of God wouldn't let them get me, but they let me know they're there."

Gamez believed he'd been enlightened to another dimension.

"There is an inner being, soul, within us and wants to live and wants everlasting life. And it fears the abomination of everlasting darkness. I really appreciate, when I crossed over, my ranches meant noting, my property meant nothing. I'm left with nothing. Nothing was important. You speak, not with your mouth, but your mind. You have no physical form. And I can prove it because I was dead. And all that spirit of yours wants is to reach that light I couldn't reach."

His voice commanded the empty room, rough and croaking, pushing past my attempts to ask questions during the long pauses between phrases.

"So I cannot say that what she saw wasn't real," Gamez said. "I don't make that judgment anymore—if she's crazy or sick or mentally retarded—no, I know they're there, and they make people do very bad things. Evil things. Demons' purpose in life is for us—to compel us to do bad things. There is no love with these creatures."

Gamez's experience, judge its merits how you may, very likely informed Angela's fate. She will be eligible for parole in 2045.

The fate of the children I cannot bring myself to recount.


In John's version of events, he decapitated the children because they seemed to rise and revive after being choked and stabbed.

That is really all you need to know.

Laura Tillman backs up at the end of the book:


The building drew me in, but the real pull was not the structure, it was the questions. I thought after all this time they would be resolved. Instead, I find myself more unmoored than when I started. Yet that doesn't bother me: resolution doesn't seem to be the purpose of questions like these. They open journeys, within and without, daring us after each step to go still further.

And here is where that fifth star, wavering in and out, went out for the last time. It seems to me a...bloodless...response to this journey through a layer of society that one can not see, still less live within for any length of time, and emerge unchanged in profound and irreparable ways.

Reading is resistance...even to the internal prettying-up and makeover that we call "denial."
Posted by Richard at 6:30 AM