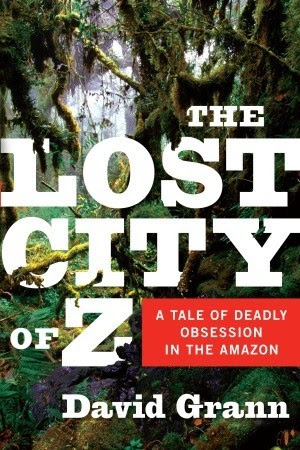 THE LOST CITY OF Z: A Tale of Deadly Obsession in the Amazon
David Grann
Doubleday
$27.50 hardcover, available now

The Publisher Says: A grand mystery reaching back centuries. A sensational disappearance that made headlines around the world. A quest for truth that leads to death, madness or disappearance for those who seek to solve it. The Lost City of Z is a blockbuster adventure narrative about what lies beneath the impenetrable jungle canopy of the Amazon.

After stumbling upon a hidden trove of diaries, New Yorker writer David Grann set out to solve "the greatest exploration mystery of the 20th century": What happened to the British explorer Percy Fawcett & his quest for the Lost City of Z?

In 1925 Fawcett ventured into the Amazon to find an ancient civilization, hoping to make one of the most important discoveries in history. For centuries Europeans believed the world's largest jungle concealed the glittering kingdom of El Dorado. Thousands had died looking for it, leaving many scientists convinced that the Amazon was truly inimical to humans. But Fawcett, whose daring expeditions inspired Conan Doyle's The Lost World, had spent years building his scientific case. Captivating the imagination of millions round the globe, Fawcett embarked with his 21-year-old son, determined to prove that this ancient civilisation--which he dubbed Z--existed. Then his expedition vanished. Fawcett's fate, & the tantalizing clues he left behind about Z, became an obsession for hundreds who followed him into the uncharted wilderness. For decades scientists & adventurers have searched for evidence of Fawcett's party & the lost City of Z. Countless have perished, been captured by tribes or gone mad. As Grann delved ever deeper into the mystery surrounding Fawcett's quest, & the greater mystery of what lies within the Amazon, he found himself, like the generations who preceded him, being irresistibly drawn into the jungle's green hell. His quest for the truth & discoveries about Fawcett's fate & Z form the heart of this complexly enthralling narrative.

Now. A four-plus star book review from me and a host of other sources, agreement among critics from Den of Geek all the way to The Nation, and a cast of pretty, pretty actors...plus the fact that it's an Amazon Studios original appearing hot on the heels of their Golden Globe-winning Manchester by the Sea, makes this a super-promising April 2017 must-see. Amazon might very well be Satan, I can't say I agree but there's a chorus of unhappy people from contractors to suppliers to anti-globalization zealots who say it is, but Satan's offering us a lot of really great inducements to forget his agenda. Amazon's Prime streaming service alone is worth the $100 a year it costs. I love that so much of Amazon Studios' output is book-based. Calculated or not, it's a great thing to see the filmed entertainment industry gain a player that mines the immense vein of unadapted written work instead of churning out sequels and comic book heroes and the occasional bland screensaver-level movie.

My Review: This excellent book is the exciting, unusual story of the last of the Victorian polymath explorers on his quest to prove the unthinkable: That the Amazon, that "false paradise", supported a major technologically advanced civilization before the Columbian Holocaust.

Percy Fawcett took his oldest son and his oldest son's best friend into the depths of Amazonia in 1925, to search for a place that the consensus of scientific wisdom of the time said could not exist. From that day to this, there has been no evidence of these three mens' existence. This by itself would provide the bones of a fascinating story. Why would a father risk his son's life in so unlikely a quest? Why bring the son's best friend? What the ruddy bleeding hell was a 58-year-old man THINKING to do this at all?!?

Percy Fawcett was supported by his wife, who was his son's mother, and the mother of the best friend, as well as the Royal Geographical Society. He was a veteran Amazonian explorer. His son was himself writ young. His son's friend, well, it's on such trips as this that a man uncovers his true self, and the best friend was...wanting.

The author's expedition to follow Percy Fawcett's footsteps is, blessedly, brief in the telling. Exactly long enough, in fact. What the author, a fat middle-aged shlub who writes for The New Yorker, discovers...should be front-page news.

Read this book. No evasive "maybes" no "I'll get around to it"s just go GET THIS BOOK AND READ IT. No one with an ounce of human curiosity can possibly regret reading The Lost City of Z.
Posted by Richard at 8:24 AM