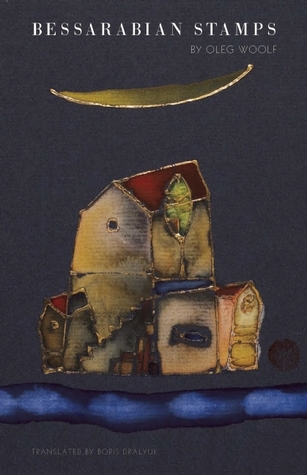 The Publisher Says: Reminiscent of Bruno Schulz’s Street of Crocodiles, Oleg Woolf’s Bessarabian Stamps — a cycle of 16 stories set mostly in the village of Sanduleni — is a vivid, surreal evocation of a liminal world. Sanduleni’s denizens are in permanent flux, forever shifting languages, cultures, and states (in every sense of the word). Woolf has relocated magical realism to Moldova. With the turmoil in current Russia and the post-Soviet world, Bessarabian Stamps emphasizes the absurdity of the mundane.

My Review: I am not entirely sure that I even knew there was a place called "Moldova." It's on my literary radar now. My review of The Good Life Elsewhere was suffused with my sense of the proceedings as almost cartoonish in their surreal yet inevitable zaniness. This collection of tiny tales does nothing to alter that basic impression. But Woolf's microstories add a layer of sophistication to my gloss on his state (in the several senses of the word that pervade the book):


It was raining the kind of rain that exhortations can't help, and try as one might, one won't manage a thing against the water.

This is on the very first page of Oleg Woolf's very first story, "Aurica and Van Gogh." Now's probably a good time to mention that I can't use my normal story-by-story review technique because the stories themselves are shorter than any analysis that would prove useful to the reader. So instead, the gestalt of the collection is what I'll talk about.

I've already published a public appreciation of Phoneme Media and its more-necessary-than-ever mission to bring American audiences the best work of people from other cultures. It is an urgent and necessary corrective lens to the myopic, nativist recrudescence we're seeing already...and have been able to see, had we the eyes to do so, since the time of de Tocqueville. Literature and film in translation in the US amounts, at the optimistic best-case scenario end of the statistics, to three percent of the total market output. And that data is probably the optimists' bible, since the University of Rochester, who collects the data, is reliant on voluntary reporting and has no power of compulsion to back it up.

It's a damned shame, too. The pleasures of reading Oleg Woolf's Bessarabian Stamps are many. The description of a village elder as "...well over a hundred, and remained a person of such openness, kindness, and strength that she was impossible to bear," for example, is pitch-perfect, precise, and funny as hell. We've all thought that someone was too good to be true, like Mother Teresa that old ambulatory accusation of avarice. Woolf makes many such arc-lights to illuminate his characters' essential reality. His is a gift of economy of praise and an abundance of clarity.

One thing that Woolf makes sure we know about Moldova is it's rain-forest-level wet all the time, and populated primarily by the oldsters who have been left behind by history:


Brăndulescu just watched and listened in silence to the rain, and it seemed that this rain would slowly transform into the murmur of some bygone voices, expired and empty. And suddenly he felt not so much sad, as somehow for nothing. He peered into the torrents of rain seriously and attentively—as if leaning over them—while they, in the usual manner of old men, forgetfully withdrew into themselves.

Americans are entering this population crash, well underway in Europe for a generation. Young people all over the world have migrated to cities since World War II, rural depopulation is exacerbated by the mechanization of farming, the collapse of the value of such labor as farming still requires, and the consequent rise in economic migration from Third World countries changes the sociopolitical landscape forever. Look at the Mexican migrant workers doing American farming scut-work in slave-labor conditions...almost sixty years after Harvest of Shame was broadcast. Unprovably, it's been asserted that this horrible exposé fueled the rise of what became Lyndon Johnson's Great Society programs. If nothing else, the attention of the culture was focused by that one show.


The day was full of the kind of clouds one rarely sees in Moscow—sour cream-like, made of human souls. Shaggy Markov walked across the Bolshoy Kammeny Bridge, and each of the piers was more governmental than three railroad stations. Many of those he passed on the bridge may have read his books, but without love, grief, pleasure, separation, or regret, as one reads before bed: so as to fall asleep. So as to, just think, nine hundred pages—your eyes fall on any of them and the author says: you just read my thoughts. And me, what are his thoughts to me—they've just put me aside for a rainy day.

It's raining as hard as we're ever likely to see it rain, ladies and gentlemen, in a time when a man who openly and publicly said he grabbed women by their private parts had his statement brought to light and still won the presidency of the United States of America. We are all in need of reinforcement, of feeling understood and supported by every means at our disposal. We are in urgent need of the fellow feeling that reading translated works brings us. We need to support the work of companies like Phoneme Media, so that they can afford to bring us comfort and understanding from the places in the world we simply don't know anything about.

Bessarabian Stamps is an excellent book. It is a great place to bolster your inner resistance to philistinism and enforced ignorance.
Posted by Richard at 1:43 PM