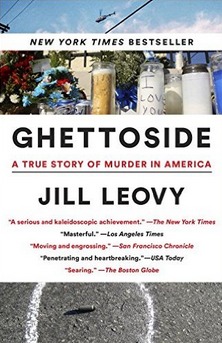 The Publisher Says: On a warm spring evening in South Los Angeles, a young man is shot and killed on a sidewalk minutes away from his home, one of the thousands of black Americans murdered that year. His assailant runs down the street, jumps into an SUV, and vanishes, hoping to join the scores of killers in American cities who are never arrested for their crimes.

But as soon as the case is assigned to Detective John Skaggs, the odds shift.

Here is the kaleidoscopic story of the quintessential, but mostly ignored, American murder—a “ghettoside” killing, one young black man slaying another—and a brilliant and driven cadre of detectives whose creed is to pursue justice for forgotten victims at all costs. Ghettoside is a fast-paced narrative of a devastating crime, an intimate portrait of detectives and a community bonded in tragedy, and a surprising new lens into the great subject of why murder happens in our cities—and how the epidemic of killings might yet be stopped.

This book was a holiday gift from a special friend. "Thanks" honey, I love you too.

My Review: I had nightmares reading this damned book. I finish a book a day. This one took me a solid month of on-again, off-again "holy shit I can't, I just can't" reading to finish. I'm a privileged fuck. I always was. I think my one hope for any redemption is that I've never been under any illusion I wasn't. This is a read to make a decent soul scream and rage against the horrors of an everyday reality *in*our*own*country* that is so, so, I can't...I do not possess a word anywhere in my brain that's equal to the towering emotional and political indignation, fury, disgust, horror, agony, grief that I am experiencing.

I'll attempt to be a bit more rational from here on out. I think quoting Leovy herself will help with my incoherent outrage.

Start with this. Leovy's commonsensical reduction of the problem facing our country's law enforcement machinery, the notable lack of a will to do the right thing:


...[T]o assert that black Americans suffer from too little application of the law, not too much, seems at odds with common perception. But the perceived harshness of American criminal justice and its fundamental weakness are in reality two sides of a coin, the former a kind of poor compensation for the latter. Like the schoolyard bully, our criminal justice system harasses people on small pretexts but is exposed as a coward before murder. It hauls masses of black men through its machinery but fails to protect them from bodily injury and death. It is at once oppressive and inadequate.

That's pretty much the entire book's point in a nutshell. Understand this, really get it, and you'll be able to read this book without feeling bitch-slapped by the facts. It won't help one iota with the emotional shellacking you're going to take. Yep, that's right laddies and gentlewomen, this another Eat-Your-Spinach Book! Oh boy oh joy, Jeremiah bar Derus slings another jeremiad at ya!

But c'mon, read this and tell me that you can't see why:


Society's efforts to combat this mostly black-on-black murder epidemic were inept, fragmented, underfunded, contorted by a variety of ideological, political, and racial sensitivities. When homicide did get attention, the focus seemed to be on spectacles — mass shootings, celebrity murders — a step removed from the people who were doing most of the dying: black men.

They were the nation's number one crime victims. They were the people hurt most badly and most often, just 6 percent of the country's population but nearly 40 percent of those murdered. People talked a lot about crime in America, but they tended to gloss over this aspect — that a plurality of those killed were not women, children, infants, elders, nor victims of workplace or school shootings. Rather, they were legions of America's black men, many of them unemployed and criminally involved. They were murdered every day, in every city, their bodies stacking up by the thousands, year after year.

These facts constitute an invitation to jeremiadize, no? The appalling stark factual truth makes for bad feelings but better votes, or so I hope. The facts of young Bryant Tennelle's murder aren't unusual. They're quite appallingly routine, in fact. I can't see any reason to pretend otherwise. His father is one of the good guys...a cop...but he was just like a million other young Black men in his neighborhood. And he paid with his life for his father's decision not to leave the world he grew up in, the world of violence and death and grief that generations of political and social inaction at the least destructive and targeted harassment at the worst have created. Make no mistake: Leovy shows clearly that this situation isn't new, isn't accidental, it isn't some ghastly malevolent internal evil inherent in South Central's men. It's us, the rich white people who vote for Law-n-Order for no free rides for moochers for the eternal unchallenged supremacy of Our Kind over the lower orders. Or, to put it simply, Trump's Murrika.

The fact is that this carefully constructed economic and social apartheid has predictable consequences. Among them is the inevitable rise of illegal shadow economies centered around illegal activities. How the hell else are you supposed to be part of this giant consuming machine? It takes money to be one of those getting and spending, and flipping burgers at Mickey D's isn't going to get you an Escalade:


When your business dealings are illegal, you have no legal recourse. Many poor “underclass” men of Watts had little to live on except a couple hundred dollars a month in county General Relief. They “cliqued up” for all sorts of illegal enterprises, not just selling drugs and pimping but also fraudulent check schemes, tax cons, unlicensed car repair businesses, or hair braiding. Some bounced from hustle to hustle. They bartered goods, struck deals, and shared proceeds, all off the books. Violence substituted for contract litigation. Young men in Watts frequently compared their participation in so-called gang culture to the way white-collar businessmen sue customers, competitors, or suppliers in civil courts. They spoke of policing themselves, adjudicating their own disputes. Other people call the police when they need help, explained an East Coast Crip gang member. “We pick up the phone and call our homeboys.”

Unpurse your fucking lips, hypocrite. You're right there with your VISA in your wallet and your mortgage payments met. You're in this hip-deep and you've made it look good in a big public way. Of course everyone else wants it too. Everyone in the world wants it too, and that's how we got this far down the rabbit hole that's rapidly turning into a black hole swallowing the entire substance of the planet. Bryant Tennelle could have had your kind of life, if he'd been able to keep his own. He was a middle-class kid in a world where walking the tables to middle classdom is only possible when you join the alternative economy and its social offshoots, or you sell out and support the "legitimate" system.


One of Skaggs’s colleagues picked up a word a Watts gang member used to describe his neighborhood: ghettoside. the term captured the situation nicely, mixing geography and status with the hustler’s poetic precision and perverse conceit. It was both a place and a predicament, and gave a name to that otherworldly seclusion that all violent black pockets of the country had in common—Athens, Willowbrook, parts of Long Beach, Watts. There was a sameness to these places and the policing that went on in them. John Skaggs was ghettoside all the way.

The author has quite a case of hero worship for John Skaggs. I am right there with her on the fact that he is a decent and honorable man. Based on the book's portrayal of him, I think his desire to do the right thing is just a part of him, like his hair or his eyes.

I can genuinely understand how a man of his caliber would look around and say to himself, "No."


Explicitly confronting the reality of how murder happens in America is the first step toward deciding that it is not acceptable, and that for too long black men have lived inadequately protected by the laws of their own country.

It's obvious and inescapable that this is reality. A man like John Skaggs isn't built to see this and not do what he can to change it. But there's a price to pay for this kind of starchiness. He doesn't come across as a very approachable person. Does that matter? In the wider scheme of things, not really; but it makes the book a bit hard to carry on with at times. Author Leovy's obvious admiration for Skaggs increases the effect.

But listen up, internet-enabled scions of generations of privilege and oppression: Change is Gonna Come. Get on board or you'll really, really, really regret it. Ask the poor white people who voted for Trump. They know.