THE LOOTING MACHINE, outrage upon indignity after robbery 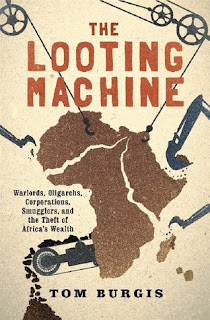 The Publisher Says: The trade in oil, gas, gems, metals and rare earth minerals wreaks havoc in Africa. During the years when Brazil, India, China and the other “emerging markets” have transformed their economies, Africa’s resource states remained tethered to the bottom of the industrial supply chain. While Africa accounts for about 30 per cent of the world’s reserves of hydrocarbons and minerals and 14 per cent of the world’s population, its share of global manufacturing stood in 2011 exactly where it stood in 2000: at 1 percent.

In his first book, The Looting Machine, Tom Burgis exposes the truth about the African development miracle: for the resource states, it's a mirage. The oil, copper, diamonds, gold and coltan deposits attract a global network of traders, bankers, corporate extractors and investors who combine with venal political cabals to loot the states' value. And the vagaries of resource-dependent economies could pitch Africa’s new middle class back into destitution just as quickly as they climbed out of it. The ground beneath their feet is as precarious as a Congolese mine shaft; their prosperity could spill away like crude from a busted pipeline.

This catastrophic social disintegration is not merely a continuation of Africa’s past as a colonial victim. The looting now is accelerating as never before. As global demand for Africa’s resources rises, a handful of Africans are becoming legitimately rich but the vast majority, like the continent as a whole, is being fleeced. Outsiders tend to think of Africa as a great drain of philanthropy. But look more closely at the resource industry and the relationship between Africa and the rest of the world looks rather different. In 2010, fuel and mineral exports from Africa were worth $333 billion, more than seven times the value of the aid that went in the opposite direction. But who received the money? For every Frenchwoman who dies in childbirth, 100 die in Niger alone, the former French colony whose uranium fuels France’s nuclear reactors. In petro-states like Angola three-quarters of government revenue comes from oil. The government is not funded by the people, and as result it is not beholden to them. A score of African countries whose economies depend on resources are rentier states; their people are largely serfs. The resource curse is not merely some unfortunate economic phenomenon, the product of an intangible force. What is happening in Africa’s resource states is systematic looting. Like its victims, its beneficiaries have names.

It's enough to make a decent human being into a raving lunatic-level, bomb-throwing, anti-capitalist revolutionary.

The scale of this appalling criminal enterprise beggars the imagination. There is no conceivable metaphor for the sheer scope of it. The number of companies and countries involved is shocking, but not remotely the most revolting datum; the volume of money is stunning, but not outside human comprehension; what makes every other data point irrelevant, unimportant, is the fact that a mere handful of human beings—fewer than two thousand—control this machine.

We allow it. We know it's going on. We allow a small town's population of kakistocrats, kleptocrats, scumbagarchs to perpetrate this immense crime every single day without any significant impediment being put in their way. How can that be allowed? What happened to the merest whiff of that antique virtue, morality?

Nigeria, on paper one of the best candidates for wealth in Africa, is mired in poverty and factionalism that drew the author to two inescapable conclusions: he was part of a system that cared nothing for the people it used to perpetuate its privileges, and he was alive in large part at the expense of some of those people whose fate he witnessed firsthand:


I arrived in a village on the outskirts [of a Nigerian city] not long after a mod had set fire to houses and their occupants, among them children and a baby. I took pictures, counted bodies, and filed my story. After a few days trying to understand the causes of the slaughter, I set off for the next assignment. Over the months that followed, when the images of the corpses flashed before my mind's eye, I would instinctively force them out, unable to look at them. ... I felt that I ought to suffer as those who died had—if not in the same way, then somehow to the same degree. The fact that I was alive became an unpayable debt to the dead.

PTSD in textbook case form. Survivor's guilt is damned near unbearable. How come I'm here and that one isn't? How can I keep going when bearing witness is the only power I possess?

Journalism to the rescue, in a way. Reporting the facts is one thing an observer can do that does, in fact, have force and effect in the world. Nigeria's problems, like any and every country's, have many facets and roots and reasons. The heinous kleptocratic regimes aiding and abetting the amoral-by-design corporate exploiters. The exploiters hiding their vileness (not least from themselves) behind the soulless, bodiless legal fiction of corporations with legal responsibility solely and entirely to their shareholders:


What has happened to Nigeria is not the result of some innate facet of the African spirit, as some observers suggest with a shrug of casual racism. British members of Parliament have shown themselves willing to sell their right to ask parliamentary questions, and the pork-barrel politics of Capitol Hill in Washington, DC, looks very much like a patronage system. Lobbyists in every major capital inject money into politics on behalf of vested interests. The difference between a corrupted resource state and a state that can still call itself a place of representative rule is the extent to which such subversion of public office for personal benefit is the scandal or the norm. It is the degree to which the institutions of state -- legislative bodies, the police, the courts -- serve as instruments of the mighty or as checks on arbitrary power.

This isn't an accident. It's a careful design. Think about it: How else can a person, a living one with a heartbeat, live with the inevitable consequences of a resource-extraction economy on the extractees' lives? Distance is the only option. The fiduciary responsibility of corporate officers is solely to the shareholders. By law. Not the environment, not the community, not the stakeholders like employees or citizens of a foreign country. The shareholders' profits are legally ALL that can be considered. Makes sleeping at night a lot easier: "I was just following orders," say multinational Eichmanns in their SS uniforms tailored in Savile Row and Bond Street and Hong Kong, sold at Barneys New York and Neiman Marcus.

But then there's another group of criminals whose participation in the crimes is vital to making sure the spice keeps flowing (Dune reference, go look it up): The banksters. Oh my yes. The banksters are in it up to their pear-shaped hips. The author's a financial journalist by trade, he should know. And he explains in this concise example of the financing of a Ghanaian mine that cyanide-poisoned an entire town:


When the International Finance Corporation announced in 2005 that it was planning to invest in Newmont's development of the Ahafo mine, Newmont's market capitalization, the total value of all its shares on the New York Stock Exchange, stood at $17.5 billion, twice the size of Ghana's economy. Its quickly rising annual revenues were $4.5 billion, and it made $434 million in profits from operations on four continents that produced 9 percent of the gold mined worldwide. The Ahafo concession alone was sitting on gold worth $12 billion. The following year the IFC approved a loan for the Ahafo mine from its own account of $75 million and arranged a further $50 million from commercial banks, including Rothschild and Royal Bank of Scotland. The total package represented a modest 7 percent of Newmont's $1.9 billion total debt.

You don't need a finance degree or a business background to see that a minuscule fraction of debt owed by a profitable enterprise like 7 percent could easily be financed on the open credit market. The risk isn't enormous, when the underlying asset is valued at a sum like $12 billion. The IFC was founded to finance high-risk loans to corporations involved in socially desirable but economically risky activities. Mining $12 billion in gold from a tiny economy's land while poisoning its people doesn't meet a single one of those criteria.

The examples and analyses just keep coming. The book's cumulative effect is much like a dermabrasion treatment for your conscience. How could you not have known? How could anyone who did know not shout the iniquity, unfairness, abusiveness, from the rooftops? And how can you, wired netizen that you (and I) are, possibly disconnect from this system?

Can't. There's gold in each and every device you use at home, in your car, at work. Microscopic amounts, irreducible contributions to the iniquitous resource-extraction economy that stain our collective hands. How to deal with this particular "survivor guilt?" 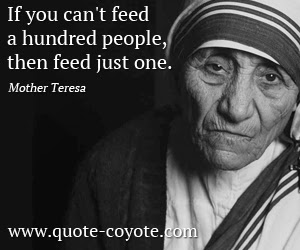