TROWCHESTER BLUES, a tale of the rightness of love shared 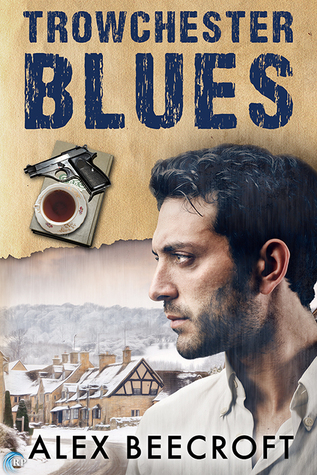 The Publisher Says: Michael May is losing it. Long ago, he joined the Metropolitan Police to escape his father’s tyranny and protect people like himself. Now his father is dead, and he’s been fired for punching a suspect. Afraid of his own rage, he returns to Trowchester—and to his childhood home, with all its old fears and memories. When he meets a charming, bohemian bookshop owner who seems to like him, he clings tight.

Fintan Hulme is an honest man now. Five years ago, he retired from his work as a high class London fence and opened a bookshop. Then an old client brings him a stolen book too precious to turn away, and suddenly he’s dealing with arson and kidnapping, to say nothing of all the lies he has to tell his friends. Falling in love with an ex-cop with anger management issues is the last thing he should be doing.

Finn thinks Michael is incredibly sexy. Michael knows Finn is the only thing that still makes him smile. But in a relationship where cops and robbers are natural enemies, that might not be enough to save them.

A long time ago I bought a Christmas tree from a fireman. He carried the tree to the car, put it in the trunk, tied the lid down with some twine, and before he was through making the last knot (four in total...I said I was traveling a half mile, wasn't that enough knots already?) he asked for my phone number.

It was a wonderful few months.

I mentioned what happened next in my earlier review of your book CAPTAIN'S SURRENDER. Frank was shaken, changed, by the honesty, the clarity, the truth that you told in that book's most perfect (to me, of course) moment: Peter's coming out as a lover of men, a man, to himself and to his god. I still give people who need it copies of CAPTAIN'S SURRENDER. It hasn't failed me yet. That specific facet of your story has comforted four more hurting souls after Frank's response proved to me that there is healing in being seen and being loved.

I hope that fact fills you with pride and happiness. It does me. That it was your second novel amazed me then and amazes me now. I am happy to say that the pleasures of reading your novels has only increased as time has gone by and you've written steadily and well.

I've come to expect from you that gift of seeing the moment when depth is too deep, and when gloss is too glib; your ability to balance them is one of the unteachable gifts that you possess. I recommend your books to people based on that fine balance. But then there's the thing that I don't tell them. I just leave the lucky sods to discover it for themselves:


Shame was perhaps ninety percent of the weight lodged under May's breastbone where a heart should be, but he had enough experience of the stuff to know the shame was only a sugar coating on something more insidious, so deep, so hollow he often wondered why he didn't just implode. Take himself out of existence, like a soap bubble with all the air sucked out. Right at this moment, he'd welcome it. Stop thinking. Stop hurting. Stop being him. That would be fantastic.

I can't guess how you know with such intimacy the exact experience of toxic shame. I can say that your finely honed words that are both funny and horribly painful, encapsulate fully the experience as I know it. And again I say that there is healing in being seen, being loved...being created as your character Michael May was in your accepting imagination.

May returning to Trowchester, where he never drew a happy breath, makes a lot of sense in the context of a man hollowed out by a rough life seeing the least and the lowest in constant action. He's down near the bottom of the well already and there's nothing to lose by going to a place that taught him the worthlessness of happiness and the falseness of hope:


When [Jenny, his best friend] signed off, the place felt emptier, lonelier, a million miles away from anywhere. The boat looked bare and the bed cold. He tried sitting on it, but in the small space the curving walls seemed to be clenching around him, crushing him. He wondered how long it would take before whatever it was that was gnawing away at his insides would finally swallow them and let him die.

I think we're all, those of us broken and hollow and stinging with the pain of a parent's emotional abuse, familiar with the no-space-can-be-big-enough problem. You put it so well...the cold bed, the clenched walls, the apparatus of protection being made the mechanism of abuse...is any act more cruel than depriving another soul of the ability to find comfort in the place that we must all return to, our home? If there is, I don't know about it, and I don't want to.

But May isn't the only one whose life you're excavating to such good effect. Finn the ever-so-slightly bent boy-man whose long dark night of the soul came from the darker paths that his love of beauty led him down. Yes, like Michael's, his life was deeply and unnervingly flawed by his inability to resist the lure of the object even when its provenance was clearly tainted. His cultured soul recoils only from ugliness, brutality, not from legal niceties that mean nothing when matched against a palette of perfect beauty and the unique historical presence of objects. Finn will do anything to possess a perfect object, because he is imperfect. Criminality? Pfui. Pettifogging bureaucratic nonsense.

Until the day he loses more than his illusions can support. Again, I can't guess how you know with such intimacy what happens when one loses a partner. Far as I'm aware your husband is hale and hearty and bids fair to see your grandchildren married. But wherever it comes from, your knowledge of that loss's effects on the entire rest of a man's life is spot-on. After Finn loses his illicit career as well as his beautiful love Tom and runs away to Trowchester, you leave him alone for five whole years. That feels so familiar. Finn won't rush into anything serious because, well, there can't be anything worse than the disappointment of let-down, can there? You said it so well, in this moment after Finn, in short order, suffers many body-blows to his hard-won peace, not to mention an attempt on his life that damages his bookshop, and all without his Michael to protect him:


Bathing and dressing in clean clothes did a little to alleviate his mood, but not even eating bacon and eggs, toast and marmalade and coffee did anything to fill the hollow inside him, where everything that he was had drawn itself deep inside, retreated, squeezing itself together in a singularity of soul so buried he couldn't tell if he was angry or sad or calm.

There's really nothing much to say after that, is there, except "however it is that you know that sensation so intimately, I am sorry."

Finn has depths he doesn't visit too terribly often, depths of deeply sentimental and shockingly sincere lovingkindness. His is the kind of smiling, bright face that no one thinks to wonder what propels the wattage out, they just bask in the warmth and dread the flares. He quite simply can't not help when his help is necessary. He somehow knew that a shadowy lurker around his home was a soul in need, and he's been leaving a meal for the shadow without ever knowing the lost soul's identity. His grace is knowing when to poke and pry and when not to. His ghost has, in the whirl of events, vanished...but his concern has not:


"And you used to put dinner out on the table most nights, when you was eating yours." Her smile wavered and crumpled. Her eyes filled with tears all of a sudden. "And I used to eat it, and I'd look up, and I'd see you sometimes in the window. And it would be...It would be like I wasn't alone."

She raised her hands to her face, made a sound like a laugh until it escalated into racking sobs. Finn's own eyes watered in response.

"You're my ghost?" He didn't stop to think, just stepped forward and threw his arms around her. She stiffened briefly and then turned into him, burying her head in his shoulder, as she wept. "You're my ghost! I've been so worried. When you stopped coming I thought something bad had happened to you. I didn't know—" He looked up over her shoulder to Michael who was looking stunned and suspiciously glossy-eyed behind her.

"I can't believe it." He had a good cry himself, for joy mostly. His eyes were closed when Michael slipped his arms around them both and briefly held them both up. Then there was embarrassment and overly bright, overly cheerful voices as he passed Sarah his handkerchief, and Jenny picked the spilled coats off the floor, and insisted on a hug of her own.

I see what you did there: You made a family from the detritus of unmet needs and unwanted feelings. I am as sentimental a sod as they make 'em, and that just about perfectly met my need for the pieces to be picked up and made into a work of kintsugi by a mistress of the art.

There is a rightness to a story deeply felt, properly told, and burnished to a soft gleaming imperfect warmth. It lets me in, lets me inhabit the characters as I wish and as my needs demand. It isn't a common effect in any field of writing. It is a sensation that I have come to expect when reading your books...and I'm pretty much all caught up on your to-date output...and that is the reason I come back for more. Moments like this:


Michael had risen to his feet before it occurred to him that he should not be taking orders from Finn. He had a bizarre flash of mythology, the thought that if he was a fucking animal at times, maybe together, with Finn's controlling hand on the reins, they could be a centaur.

Well. That's me destroyed. You, kind lady, you reached southwestward from your northerly latitudes and delicately flensed from my hiding place the secret of my joy. I wonder if my cynical wounded self will have another Michael, be another Finn; it's almost enough to have your enfolding generous imagination include me in the world.

Oh dear, that was rather earnestly American of me, wasn't it. You will simply have to dig deep under your proper lady's reserve and forgive a heartfelt statement of admiration from,

PS if you're wondering where the missing half-star on this review is, it's the same place as the missing twenty thousand or so words dedicated to the Lis, to Sarah, to the book club boys are. (Yes, I know, James is coming, but it's not enough!) And while I, book magistrate, have determined that you have no case to answer, I strongly caution you that old American fanboys deprived of a return visit from Michael, Finn, Jenny, Sarah, and the rest of this cast could result in unwished-for squatter tents in your front garden. Complete with curmudgeonly glowers.
Posted by Richard at 11:53 AM