HOW ARE THE MIGHTY FALLEN, a mythopoetic extravaganza that still moves me to tears 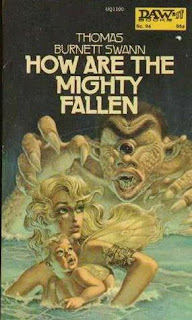 The Publisher Says: Cyclops and sirens, halfmen and godlings...that of which myths are made and that from which worship arises—these are the materials Thomas Burnett Swann weaves together in the fantasy-historical tapestry of this new novel, which he considers to be his most important work to date. For the author of Green Phoenix and The Forest of Forever now tells of a Queen of ancient Judea who was more than human, of her son who became legend, of their Cyclopean nemesis whose name became synonymous with Colossus, and of loves and loyalties and combats fixed forever in the foundations of human society.

The ever-growing audience that Thomas Burnett Swann has gathered for his unique novels will find How Are the Mighty Fallen a new fantasy fiction experience.

My Review: When this book came out in 1974, the publisher had to fight with its distributor to get it onto store shelves. The topic, gay male love in Biblical times and, in fact, between two men whose friendship *ahem* has survived the millennia in myth, was treated frankly as falling in love and being a couple. Yep, that's right, David and Jonathan were doin' the nasty in Swann's fantasy universe. And much like our own time, even more like the times 43 years ago, they had to avoid religious nuts and disapproving fathers and nosy old bats with more time on their hands than is healthy.

Like all the great love stories between men that have come to our own time, the idiotically squeamish have seen fit to reinterpret the tales as being examples of friendship. After all, friendship is sexless! And that means we don't have to think about men gettin' all naked and sweaty and touching each other with lovers' hands! Couple things wrong with that, hypocrites: 1) If your spouse isn't your friend, I feel very very sorry for both of you. 2) You have, by your squeamishness about man-on-man action, demonstrated that you're already thinking about other people, all other people, in sexual terms. Which is considered deviant sexuality in theraputic terms. Sex therapists teach that all sexual thoughts which do not involve the prior knowledge and explicit consent of the subject thereof are deviant. So every time you pleasure yourself thinking of Nick Jonas or Taylor Swift, you're a deviant!

Ha ha ha, deviant. That's the price of being a mere human!

But David and Jonathan paid the price that's demanded of all those who love transcendantly: Loss. It's not as though all of us mortals don't lose, it's that the stakes aren't as high for us. The great ones always excite envy in the lesser. Then the burden of life in the muddy mess of the world is lifted from them by their love and, well, that's more than can be borne by the small-souled:


Saul looked to Elim. "What do they say?" Deeply religious, he had not lost faith in Yahweh; rather, he feared that Yahweh had lost faith in him.

"Let the king discover and punish the transgressor."

Saul sighed and the years seemed to rest on his shoulders like a mantle of snow. Was this the ardent man she had loved at the well in Endor, he who had left his fields...to unite a divided country? It sometimes seemed to her that...he hardly possessed the energy to sigh. It was her one satisfaction that he could no longer be an impassioned lover to Rizpah [his mistress].

The great one here is Ahinoam, a Siren, a winged Queen of her people exiled from their happier exile on the abandoned Crete post-Minoan times. She and her son Jonathan swam to Judea from Crete in an escape from the Cyclopes, whose attentions great queen Ahinoam has been fleeing since her people first fled the great northern lands in fear of the Goddess. She, creature of the sky, found love and sanctuary with an earthy, earthly man of rough ways and deep passions, Saul the reluctant farmer-king of his people. Ahinoam and Jonathan are his, his alone, and none was happier with this than Saul himself. The wars roll past, the queen bears Saul sons and daughters, and slowly loses her Siren's powers even as she keeps her Siren's perfect beauty. Of course this beauty becomes her curse, loses her the beloved Saul to a manifestly inferior being as his mistress, and sets in motion the loss that all who dare to love, really love, face.

Jonathan grows up knowing nothing, except what's whispered near him, about his genesis. Saul loves him as a son. That's what Jonathan knows. He behaves as a king's son must behave in Saul's world, learning war and battle as the noblest accomplishments. He is, when the book opens, wounded and recovering when he and his one great love meet. David is a young man of great vigor and surprising depths of creativity. He is the son of a nobody, he has older brothers who are larger and stronger than he is, but he has a golden talent for psalmistry. I think we'd think of him as a rapper today. His lyrics have survived in the Torah and the Bible because he wrote beautifully. He sang beautifully, too, and it was this that brought him to Jonathan's bedside at his mother's behest. She thought to comfort her son, though Swann loads her actions with foreknowledge. David sees, really sees, Jonathan and that is doom for one who is primed by otherness for passionate love:


He discovered too a surprising weakness in the famous young warrior. It was neither moral nor ethical; it was not a shifty eye or an averted gaze. Rather, there was a fragility about him; he was like a purple murex with its delicate spines and its exquisite dyes. He is too beautiful, David decided. He has about him the transience of perfection. Being already perfect, he cannot be improved, he can only be broken.

Or, in simpler terms, love at first sight. Ahinoam, as the Siren that she is, knows what time it is, and has no problem with it. Her people and so many others, those who follow the Goddess, place no limits on love. Yahweh, jealous and angry god of a small people in a larger world indifferent to their fate, decrees the sexual love of like for like to be a sin (a concept lacking in Goddess worship) because the attraction is too powerful and will prevent Yahweh's people from making babies and thus perpetuating his worship:


The Goddess never decreed that men should lie only with women. All of the races which worship her...accept the love between two men as one more affirmation of the divine plan, the tide which rises and falls to the moon's compulsion, the inevitability of the seasons, the certainty that those who love will meet, after death, in the Celestial Vineyard. A man’s love for a man is neither more nor less than a man’s love for a woman, it is only different.

Loving each has its joys. Loving both has its pleasures. But sooner or later, a choice gets made, and it's not yet possible, like a Gethenian, to pick and choose one's physical state. I suspect that, when we're honest, each of us likes sex enough to give any old thing a whirl. Love is usually a little choosier. Falling in love is Game Over for all the others.


He is still in love with her, but Rizpah is comfortable, and the old need comfort more than passion. It is hard for advancing age to confront eternal youth. (italics in original)

I understand this, but I guess it means I'm not old yet because I ain't ready to say "buh-bye" to passion. Maybe this is why I find myself in relationships with younger men. Thank goodness there are one or two still ready to think of me in that way. Ahinoam chose, in Saul, the path of love; Saul lost himself to the immense gravity of a great love, a once-only full-being involvement. Such a thing can't last for a lifetime and, since his one true love is the very definition of Otherness, what else can he be expected to do except flee to the ordinary when he can't sustain his passion?

David is set to discover the same tragedy. Jonathan, in his illness, can't do battle with Goliath the Cyclops who has stalked his mother since the halcyon days on Crete ended. David the rapping shepherd, a young man of great strength who slew a lion with his bare hands, is still too young, too untested, too small to fight such a creature as a Cyclops, says the voice of consensus. The consensus fails to take into account the fact that a man in the grips of his one true love isn't limited by practical, realistic considerations. He will amaze everyone with his seemingly miraculous abilities:


"I will not die!" The words were a trumpet call.

He fitted his last stone, Jonathan's tourmaline, into his sling and somehow, propped on his other arm, flung the stone awkwardly upward and toward the bewildered eye.

I have missed, he thought, or done him no harm with so light a shot. He stands above me frozen like an Assyrian statue. Stone; stony and heartless. No welt has appeared on his brow. His boot will complete its descent and grind me into the flowers.

The earth exulted with Goliath's fall.

The power of love is terrifying.

But so is the price. David, in his deep passion for Jonathan, becomes more than a hero to his people, he becomes a legend. He is the name on every tongue, his psalms are sung by every voice, his lover Jonathan the royal prince is beautiful beyond compare...the very priests of Yahweh say he is the next king after Saul, beloved of the whore Rizpah.

NEVER threaten a woman's one great love. She will rise up and smite those who are stupid enough to do so. If a mother is the most dangerous opponent on the planet, a woman in love is next down the list, and both are far, far more dangerous than polar bears or sharks. Rizpah might be a whore, but she is a whore whose one great love is a king, and she does everything in her not inconsiderable powers to protect him. Including destroying his son, his son's lover, and to the extent she calls into motion the powers of war, her man himself.

David survives the battle that destroys Saul and Jonathan. David goes on to found the greatest royal house known in Israel's history. David lives. What a curse it is, outliving your great love...alive but not yours anymore, like Ahinoam's Saul, the lover is allowed a painful comfort in knowing the beloved still lives. David's Jonathan, as Swann tells us, is in No-Land; his body is unburied so his spirit is trapped between worlds. Alecto the Siren calls Jonathan from his shadowy non-place to tell David how to release him into the afterlife. Naturally, David does this for the one love that exceeds all others, saving his Jonathan yet again, just as he did when he stood down Goliath.

Alecto should, I think, have the last word. She speaks these words to Jonathan when he visits her to lose his virginity with women. It isn't his desire to do so, he does this to please his David, but Alecto calls forth the shadow of love from him and he gives her his child. Her gift to him is to distill the nature of love into a memorable phrase:

#LoveIsLove
Posted by Richard at 7:00 AM