THE BLACK CALHOUNS, proof that history is fluid when more voices join the conversation 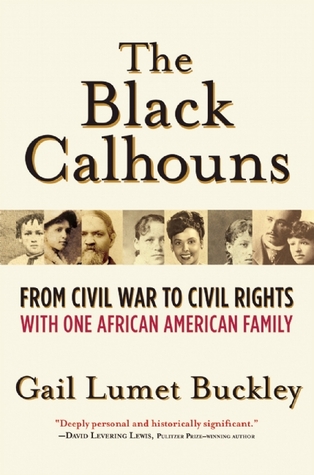 The Publisher Says: In The Black Calhouns, Gail Lumet Buckley—daughter of actress Lena Horne—delves deep into her family history, detailing the experiences of an extraordinary African-American family from Civil War to Civil Rights.

Beginning with her great-great grandfather Moses Calhoun, a house slave who used the rare advantage of his education to become a successful businessman in post-war Atlanta, Buckley follows her family’s two branches: one that stayed in the South, and the other that settled in Brooklyn. Through the lens of her relatives’ momentous lives, Buckley examines major events throughout American history. From Atlanta during Reconstruction and the rise of Jim Crow, to New York City during the Harlem Renaissance, and then from World War II to the Civil Rights Movement, this ambitious, brilliant family witnessed and participated in the most crucial events of the 19th and 20th centuries. Combining personal and national history, The Black Calhouns is a unique and vibrant portrait of six generations during dynamic times of struggle and triumph.

ATLANTIC MONTHLY PRESS SENT ME A REVIEW COPY AT MY REQUEST. THANK YOU!

My Review: There is a television miniseries on its way via ABC Studios. Here's to hoping they do it justice.

My goddesses. There is so much I personally don't know about the African American history of my own country. The saga of the Calhouns is epic, and an instructive look at the roots of white nationalism in the demagoguery of politicos hoping to be elected to office. Vile, disappointing, unsurprising given today's terrors.

The author understandably focuses on her famous mother, Lena Horne, for specifics and anecdotes to enliven her historical thesis about the existence and condition of an African American elite in each decade following the American Civil War. That's inevitable, I suppose; had she done otherwise, assuming she possessed the information to do so, this book would've been as thick as a Bible and about as interesting. Gadzooks were there a lot of Calhouns and cousins and families and friends and husbands and...well, let's just say that a four-line summary of the huge majority of the dramatis personae still pumps us to over 300pp of relatively dry material.

It's the relatively dry part that bothers me the most. I am entirely sure that Author Buckley possesses the chops to do more with even cursory mentions than is done here. I am even more sure that fewer names and more anecdotes/reminiscences/stories would've made for a deliciously readable, dare I say it novelistic, book.

Not that there is a single thing *wrong* with this book. There's a slightly slippery slope in the alternating north/south chapter format; it starts to feel forced. Believe me when I tell you that this isn't anything more than a quibble. I don't at all want to give you the impression that the book isn't a terrific investment of your eyeblinks, especially my fellow white folks who are earnestly seeking some road signs in this complicated minefield that is race relations. It helps that Author Buckley has a background in history. Her potted course in American race relations is richer for it.

Don't miss this chance to learn about race-related issues in a relatively painless way, from the "other" side of the issue.
Posted by Richard at 6:30 AM