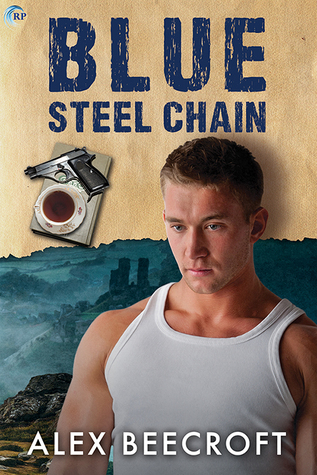 The Publisher Says: At sixteen, Aidan Swift was swept off his feet by a rich older man who promised to take care of him for the rest of his life. But eight years later, his sugar daddy has turned from a prince into a beast. Trapped and terrified, Aidan snatches an hour’s respite at the Trowchester Museum.

Local archaeologist James Summers is in a failing long distance relationship with a rock star, and Aidan—nervous, bruised, and clearly in need of a champion—brings out all his white knight tendencies. When everything falls apart for Aidan, James saves him from certain death . . . and discovers a skeleton of another boy who wasn’t so lucky.

As Aidan recovers, James falls desperately in love. But though Aidan acts like an adoring boyfriend, he doesn’t seem to feel any sexual attraction at all. Meanwhile there are two angry exes on the horizon, one coming after them with the press and the other with a butcher’s knife. To be together, Aidan and James must conquer death, sex, and everyone’s preconceptions about the right way to love—even their own.

My Review: The stakes in this darker, more violent entry in the Trowchester Blues series could not possibly be higher. Aidan's life is in danger from the instant we meet him. His horrifying experiences as Piers's sex slave have reached crisis point. Pain and humiliation and viciousness are pale miseries compared to the violent escalation that Aidan precipitates by finding his very own friend unconnected to Piers in James the Trowchester archaeologist, familiar to us from his brief appearances in both previous novels. And there is no doubt whatever that Piers, the violent pedophile abuser, will make good on his ongoing threats to Aidan's life: No spoiler here, he's done it before. See publisher's synopsis.

James's own failing relationship is with self-absorbed rock musician Dave, a complete and utter bounder but not a murderous monster. James faces down the embarrassment of Dave's very uninterested and unloving attitude towards him with his accustomed acceptance. He finds he doesn't care much, is really only putting up with this nonsense on borrowed time. After all, the man he loves is being threatened with murderous intent by a stone-cold upper-class killer. That ain't a joke. Anything short of death threats? Pshaw! James will ride to the rescue! Blessedly, he does; he even leaves his dearly beloved entirely alone to find his way through a new world, one without rage and beatings, for himself. The fact that Aidan's new employer is James's bestie and a member of Finn's book club (now held at Finn and Michael's house on the canal) who willingly keeps James in the loop about Aidan's progress in his new life is making it easier, I'm sure. But it also keeps each man in a separate sphere of Romantic Self-Abnegation: I Shall Be Noble And Avoid My One True Love So That He May Find Himself/Get On With His Life.

And then it's time for reality. The harsh glare of terror dims down to the quotidian glow of spring sunshine and mellows into the lovely eternal tea-time of summer. Aidan discovers he's asexual. James discovers he has fallen head-over-heels in love for what seems to me to be the first time. And therein a significant rub: Party of the first part has only ever experienced sex as violence and party of the second part has only ever experienced love as sex.

I must pause here for an admission: I'm a bog-standard guy when it comes to sex. My sexual preference is more, and my orientation is towards whatever man I happen to be involved with, and asexual persons are not within my area of expertise. I do not get it. I don't have to, obviously, but I'm left utterly at sea as to how someone can have no sexual desire. I felt so sad for Aidan, and shouldn't have because he isn't broken or flawed or wrong, he's just not like me. And yet I am who I am: It makes me so sad that someone doesn't have the joy I experience in a strong, healthy sexual connection to my partner. Anyway, that's out of the way, on with the review bearing my inability to relate to the character's core identity in mind.

Aidan's life takes so many wonderful turns at this point...his newfound ability to relate to people, his new and exciting ability to support himself and to live as he pleases...that he decides to include James in his happiness. James is perfectly happy to have him there, since he's fallen hard for the man. Aidan, in his own way, is right there with James in the feeling realm:


Today James looked almost like a normal human being. He wore a tweed suit that should have looked ridiculous but in fact only cemented his resemblance to an absent-minded professor and resulted in a touching bohemianism. He had attempted to flatten out his hair with some kind of hair product, but fortunately it had fought back and was as distressed as ever. The day's heat had caused him to take his tie and jacket off and roll up his white sleeves, and the shape of his forearms seemed poetic to Aidan. His fingers itched to re-create the shape in art, to try to demonstrate to the world why James was so desperately important—why his existence said something that could not be said in any other way. Something everyone ought to hear.

That is, by anyone's standards, a man in love. Asexual maybe but a lover and a besotted one. Aidan has a wonderful eye for men, as does James. The men are having themselves a time there at the folk music festival; we see Billy and Martin, from Blue Eyed Stranger, on stage dancing their reconstructed Viking dances, James pointing them out as mates from the book club; there is such genuine joy in James now that he's there with Aidan that even though Aidan really doesn't much like the whole scene, he loves James and will learn not to hate it for his sake.

Another hiccup in their borning love comes when James, on taking Aidan home to his own place, expresses his love and gratitude for the evening that Aidan planned and executed for him with a kiss. Not a good idea. Spontaneous sexual gestures are complete triggers for Aidan. He has a massive meltdown on his front step, his protective housemates send James away with a flea in his ear, and things go from bad to worse when James gets home only to deal with a surprise of his own. Dave, whom James had thought well and truly thrown out never to return, has returned with his entourage, his new lover, and expects James to make his usual lifestyle adjustments to the whole insane clown posse.

The next day is the make-or-break point for the men. They have to clean up the messes of the lives they have never actually led but simply allowed to occur around them. They are each motivated to fix things up so they can get to the real fixing they want to do: Fix the other man into his own life, become the couple they cannot imagine not being. The major event that brings them together I won't reveal, but it was very satisfying. They fight their way into life together. They fight for their oddly assorted love. They come into a true and loving and satisfying life together, complete with strange corners and odd angles and the eternally unknowable alchemy of couplehood.

I am sad to see this series over. I don't know if Beecroft and Riptide plan to publish more of them, but I hope so. Trowchester could become the gay Barsetshire, and I for one would welcome it. There hasn't been an English setting as rich as Barsetshire since Mrs. Thirkell died in 1961. The time is ripe for one, and there couldn't be a better modern spin on the concept than one focused on gay men, lesbians (are we calling them gay women yet? I heard that was going to be the new thing), asexuals, transgender people, immigrants, and the whole lot whirling in a set of orbits that would make an astrophysicist dizzy.

Mrs Beecroft, I salute you for making in Aidan someone so powerful and amazingly appealing that even I, utterly alien to the concept of asexuality, could fall for him. Many many thanks for the hours of pleasure your books have already given me. Many more happy and creative years to you.
Posted by Richard at 6:30 AM