IVY, The Life of I. Compton-Burnett is a dry dry dry book 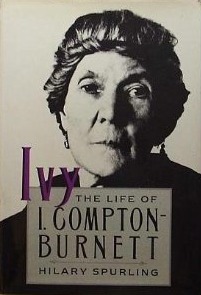 The Publisher Says: It is a real cause for celebration when the best and most subtle literary biography of our time comes back into print, and in a single volume instead of the original two. What Hilary Spurling does, in a beautifully-written book, is to relate the life of Ivy Compton-Burnett intimately to the work and show in fascinating details, and with wonderful perception, how her subjects characters mirror aspects of her own nature. The book sends one back to read or re-read the novels - unfashionable, toweringly original tragic-comedies - the most individual novels, it may be, of our time.

My Review: Why would I, a charter member of the “Eradicate Ivy Compton-Burnett” Society, have and read this book? It all started as a joke.

I once lived with someone whose dislike of Icky Crumpet-Burnoose matched or exceed my own. What better way to cause her pain than to cause her to see Icky's malevolent mug on her nightstand, with a note attached: “For relief of insomnia”?

Gratifying shrieks of outrage and stomps of fury from her bedroom assured me of the success of my evil plot. Subsequent hurling of this massive artifact at me (no mean feat! Must weigh 5lbs!) let me know that my humor was properly received and appreciated.

So why not just return the damned thing to the liberry and call it good, a prank well done? I got curious. So many bad things happen when I get curious that you'd think I'd've learned not to scratch that bump. Ha.

Turns out that Icky had a more interesting life than any portrayed in her fiction! (Not that this is a difficult feat.) The oldest child of a Victorian homeopath's second family, she was a bossy, albeit cheerful and fun older sister to her family, gradually losing all semblance of humor and kindness as her extremely weird mother made ever-increasing demands on her to run the family. Her eventual position as head of household was a disaster for her personally, resulting in the suicides of her two youngest sisters and her (far too) belovèd brother's alienation from her by marriage to a woman she didn't seem to like a whole lot. He then dies in WWI, and she drifts personally and professionally for a good long time. She has no money worries, so it's only on the emotional side that this matters.

So then she meets an older woman, more established than she as an independent professional writer and historian of furniture, called Margaret Jourdain. Their love affair lasted some 35 years, spent living together and traveling together and going to parties together. And, according to Spurling, not having sex. They said they didn't, protests Spurling! And yet, in other instances, the mere saying of something is determined by Spurling to be simple misdirection, Icky saying something to deflect or distract someone from learning details she didn't want to give. Other people said they weren't, corroborates Spurling! And yet, in other instances, eyewitness reports are discounted because the people involved were prejudiced or insufficiently informed or what-have-you.

Now, I don't belong to the school of readers who want salacious details of characters's lives, even subjects of biographies. I don't need to know what others do in their bedrooms, any others, unless in some way it expands my knowledge and appreciation of a character. And I am actively revolted by the idea of lesbian sex, unlike most males; I outgrew my juvenile need for female genitalia a long time ago and would prefer not to be reminded of them at all, thank you. I am also not one of those gay people who seeks spurious validation in claiming people from earlier times as members of the gay community before such an identity, let alone community, existed.

But if Ivy and Margaret weren't big ol' dykes, who on this earth is? And why should we for a moment believe that they never so much as kissed? Women, contrary to what most men and their female converts seem to think, have intense erotic urges that (in my experience, at least) they very very very badly want to satisfy. Most men are inept at doing so, sadly, so the myth goes on that these urges are nonexistent. Spurling does these women, raised in a homophobic and reticent culture, a disservice by denying them (posthumously) even a suggestion of a sex life. I think it's bosh, and I think it's dishonest, and Spurling and her ilk should be ashamed that their minds can't encompass the idea that two women in love could find satisfaction and pleasure in each others's bodies without wanting to make it a public display or even discuss it with others. There are anecdotes of Icky saying she'd never made love, and then going on to have quite thoroughly informed and detailed conversations with married women about sex and desire. This, says Icky's biographer, is a testament to the authoress's imaginitve powers.

Oh for God's sweet sake! Grow up, woman, and realize she wasn't that imaginitive!! NO ONE IS. You can't, even in today's world of instant and astoundingly diverse gratification, know what desire and its satisfactions are about until you've been there! Really now.

But oddly enough, I was interested enough in this life to keep reading about this writer whose tiny talents I disparage with vim and vigor at every opportunity. I wouldn't recommend it to any but her most ardent dupes, I mean fans, because it's simply too long to be useful to anyone only mildly curious. Spurling's style is clear, I suppose, though I can't say much more for it than that. It was no great pleasure to read, but it was a life lived on her own terms in a time and place where that was a very, very novel (!) and difficult achievement.
Posted by Richard at 6:30 AM