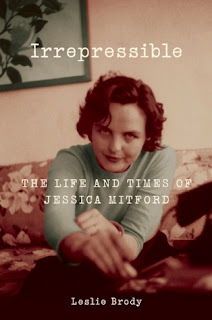 The Publisher Says: Admirers and detractors use the same words to describe Jessica Mitford: subversive, mischief-maker, muckraker. J.K. Rowling calls her her “most influential writer.” Those who knew her best simply called her Decca. Born into one of Britain’s most famous aristocratic families, she eloped with Winston Churchill’s nephew as a teenager. Their marriage severed ties with her privilege, a rupture exacerbated by the life she lead for seventy-eight years.

After arriving in the United States in 1939, Decca became one of the New Deal’s most notorious bureaucrats. For her the personal was political, especially as a civil rights activist and journalist. She coined the term frenemies, and as a member of the American Communist Party, she made several, though not among the Cold War witch hunters. When she left the Communist Party in 1958 after fifteen years, she promised to be subversive whenever the opportunity arose. True to her word, late in life she hit her stride as a writer, publishing nine books before her death in 1996.

Yoked to every important event for nearly all of the twentieth century, Decca not only was defined by the history she witnessed, but by bearing witness, helped to define that history.

My Review: A chronological retelling of the strange life and exciting times of America's finest 20th-century muckraker, from her aristocratic Fascist upbringing to her time in the Communist Party USA, then her years of fame and glory after writing The American Way of Death, her most lasting contribution to literature. Her heartbreaking family life is presented with as many warts as can be expected; her relationships with her equally famous sisters Nancy Mitford, Lady Diana Mosley, Her Grace the Duchess of Devonshire, and Unity Mitford the Nazi are discussed in some detail; her husbands and her children are woven through the story, perhaps less so than her birth family.

And yet...and still...Flat. Lacking fizz. Champagne the next day.

It felt to me like the book was the proposal for the book and not the whole enchilada. Taking on a larger-than-life personality like Mitford is always challenging. She's not a person whose dimensions are easy to grasp! This daughter of privilege was unquestionably sincere in her rejection of the world she was born into, and she was completely consistent in making her anger and disdain at the family she left behind clear. (I relate.)

But a biographer who dedicates a mere 344pp to this Force of Nature risks reporting the facts but leaving the feelings behind. I felt that it was too short, so the book was frustrating...I want to know more about *her* and yet I can't imagine a book more thorough than this one is factually.

So what happened? Jessica took the place of Decca (her family nickname)? Mmmaybeee...but no, not entirely. What I think happened is, the balance between Decca and Jessica shifts dramatically after Mitford's first husband Esmond Romilly dies in 1942. We get more Jessica and less Decca. And it ends up not being a satisfying trade-off.

So should you read this fact-stuffed tale of one of life's hellions, a scamp and an imp from the get-go? Yes. She's interesting enough to make familiarity with her life an overall good thing. But don't come in expecting your notions (if you had any) about her to change, they won't. She'll still appeal to you or not based on the well-known and hand-crafted image of a rebel and a scalawag already known.

Still and all, in today's political climate, I want lives like Mitford's to be exhumed and exhibited in front of the entire reading public. Once there were giants, once there were privileged little girls who grew into fierce, antagonistic, brave, *necessary* women who knew fuck-all about fear. Let's grow more of them!
Posted by Richard at 6:30 AM