HAD SHE BUT KNOWN, an American predecessor to Agatha Christie as Queen of Mystery Fiction 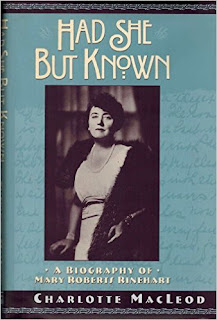 The Publisher Says: Before Agatha Christie, there was America’s Mistress of Mystery. This is the story of her life and creative legacy, from the butler who did it to Batman.

In the decades since her death in 1958, master storyteller Mary Roberts Rinehart has often been compared to Agatha Christie. But while Rinehart was once a household name, today she is largely forgotten. The woman who first proclaimed “the butler did it” was writing for publication years before Christie’s work saw the light of day. She also practiced nursing, became a war correspondent, and wrote a novel—The Bat—that inspired Bob Kane’s creation of Batman.

Born in Allegheny City, Pennsylvania, before it was absorbed into Pittsburgh, and raised in a close-knit Presbyterian family, Mary Roberts was at once a girl of her time—dutiful, God-fearing, loyal—and a quietly rebellious spirit. For every hour she spent cooking, cleaning, or sewing at her mother’s behest while her “frail” younger sister had fun, Mary eked out her own moments of planning, dreaming, and writing. But becoming an author wasn’t on her radar . . . yet.

Bestselling mystery writer Charlotte MacLeod grew up on Rinehart’s artfully crafted novels, such as the enormously successful The Circular Staircase—“cozies” before the concept existed. After years of seeing Christie celebrated and Rinehart overlooked, MacLeod realized that it was time to delve into how this seemingly ordinary woman became a sensation whose work would grace print, stage, and screen. From Rinehart’s grueling training as a nurse and her wartime interviews with a young Winston Churchill and Queen Mary to her involvement with the Blackfoot Indians and her work as doctor’s wife, mother of three, playwright, serialist, and novelist, this is the unforgettable story of America’s Grande Dame of Mystery.

My Review: I don't suppose knowing who Mary Roberts Rinehart is is as common as it used to be. She was the American doyenne of mystery writers for about 40 years, her books were serialized in The Saturday Evening Post, she lived a glamourous Republican life and never ever stopped writing until age forced her to. She was seventy-seven when her last book was published!

This book, by fellow mystery writer Charlotte MacLeod, was published in 1994. Even then, twenty-plus years ago, MacLeod was amazed and impressed that Rinehart's mysteries were still being read. (Me too!) And they're even still being republished every so often. My local library system has most of the titles in it, and all but two of them were checked out last time I looked. (I then checked out the two that weren't already gone.) The plots and characters are simply timeless, which also means that they're not overly fresh; but hey! Neither are Dame Agatha's.

Most of the book's effort is spent on Mary's early years, as a daughter, wife, and mother. The reason is that another biographer took care of the widow and doyenne years in detail. This focus on the time that Mary spent as a student nurse, the Covenanter (a species of Presbyterian without the joie de vivre for which those folk are known) wife of an up-and-coming surgeon and tuberculosis expert, and then the primary breadwinner of the household after her husband developed crippling rheumatoid arthritis in his hands. With contracts for her serials running $50,000 and up in the 1920s, she was doin' them all proud.

Mary's life with her husband, Stanley Rinehart, was apparently a lot of fun. They traveled, they entertained, they made the lives of their three sons very happy...they were each strong personalities, so no doubt there were problems, but they were able to solve them and stay more or less happily married for thirty-six years. Impressive in any day and age, given their natures. Mary's travel articles show the fun side of the relationship clearly, They were collected into books, of course, as was Mary's WWI reportage, and all are really worth reading.

Charlotte MacLeod's chops were honed in the mystery tradition that Rinehart helped pioneer. She writes pleasingly and engagingly about her subject. And best of all, she makes one care about the life of this long-dead entertainer of a bygone era. It somehow matters to the reader that Mary's plays, with one notable exception in The Bat, were complete flops; that Mary suffered agonies of self-doubt about life's goodness to her; that her mother and father were so disappointingly inept.

All writers should have as biographers the writers they themselves inspire. It makes for a top-notch reading experience.
Posted by Richard at 6:30 AM