WHAT BECOMES US, abusive relationship escapee lands in fascinating trouble 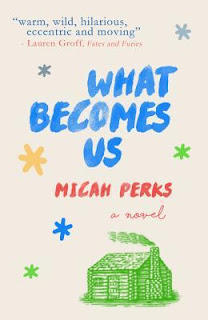 The Publisher Says: A modern-day pioneer in search of a new life, pregnant Evie leaves her abusive husband and lands in a close-knit community divided by local colonial history a story that goes deep to the roots of the American conscience. Following a near fatal accident, Evie, a mild-mannered, pregnant school teacher, abandons her controlling husband and flees Santa Cruz, California for the wilds of western New York. She rents a farm house on a dead end road in a seemingly ideal, multi-cultural community. When she begins teaching at the local high school, she becomes obsessed with an assigned book, The Captivity and Restoration of Mary Rowlandson. This early American classic is the first book written by a woman in the Americas and details Rowlandson's harrowing captivity during King Philip's War in the seventeenth century. As Mary Rowlandson's insatiable hunger begins to fill Evie's dreams, Evie wonders if she may actually be haunted. At the same time, Evie becomes obsessed with her neighbor, a married Chilean immigrant. As she grows more pregnant, her desires/hunger grows out of control, and threaten to destroy her adopted community.

THE PUBLISHER SENT ME A REVIEW COPY AT MY REQUEST. THANKS Y'ALL!

My Review: Micah Perks has some big brass ones. It's not every novelist, even one whose previous novel received a lot of praise, who would choose to narrate her novel of a woman's decision to take her own power back from a controlling and very unempathetic man from the point of view of the couple's unborn twins.

I do believe we have a new narrative option for future writers: Multiple third-person unborn.

Add into this the author's tale within the novel, a factual historical account written by the captured and enslaved Mary Rowlandson (a white woman) during King Philip's War. A tale that's apparently also a portal, kind of a non-Potterverse Horcrux, as Evie (our uterus-bearer) travels (?--the "dreams" Evie has are, well, you decide when you read the book) into the time Mary Rowlandson suffers the torments of being prisoner to the Wampanoag people's powerful Queen Weetamoo.

But Evie isn't a stranger to the feeling of being a prisoner. Her husband, so strong, so handsome, so omnicompetent, had her completely under his iron sway. He is Right; she is wrong, incompetent, weak. She can't even wipe a kitchen counter properly. It started as a willing submission on Evie's part, a sense of being coddled and protected and, in the agricultural sense, husbanded. As is so often the case, relationships founder on the rocks once used as foundations. Evie realizes she and her unborn children must not live as her husband's captives...though in all honesty, I suspect an unpregnant Evie would simply have stayed. Just my thought on the matter since the text offers no speculation on the subject.

Running away from home in a scene that's a comic parody of the classic shin-down-the-tree trope, Evie leaves the beautiful anti-Paradise of Santa Cruz and lights out for the territory. In this case the territory is upstate New York, an obscure corner of same, populated by crazies, eccentrics, and people who probably shouldn't be given the vote. It's perfect for Evie. She even stumbles across the perfect house in the first minutes of her presence in Lonely Rincon Road:


She shuts the door and examines it, no lock, loose in the frame. She rests her hand on the crack between the door and the wall and feels that cool, moist, radon-breath on her palm. This basement is the only part of the house she dislikes. Californians don't have basements. She doesn't like the idea of the ground underneath a house hollowed out, destabilizing the whole structure. She duct tapes stiff old sponges she finds under the sink across the crack between the basement door and the floor in hopes of sopping up the radon before it enters the house. Then she pulls a strip of the duct tape across the door to the wall.

Perfect! Across the street from an unsettlingly handsome Chilean immigrant, his felonious war-protester wife (this is set in the first Bush administration), their headstrong young daughter, his super-Christian brother and that family of wackos (the normal one ran away to New York City so they pretend she's dead), his wife's ne'er-do-well brother and sons (Juniper, their mom, is Not All There and wisps through the narrative like really good hash smoke); well, you get the drift. And the house, radon-filled basement and all, is Evie's dream. Her husband is a continent away and unlikely to think of looking for her where she is; she's left no clues she can avoid leaving to lead him there.

Add in Evie's job at the local high school and the elements are there for a darn fine life.

Stories wither and shrivel without conflict. The conflict on Lonely Rincon Road centers on Narrative of the captivity and Restoration of Mrs. Mary Rowlandson. Evie encounters the book for the first time as she prepares to teach high school history in place of a fired Evangelical friend of her nutty Christian neighbors. His take on the book was, shall we say, not to community standards. Evie has a much more disturbing relationship to the book.

She's possessed by Mrs. Mary Rowlandson. They're dreams, thinks Evie, who has developed perinatal somnambulism. They're dreams so vivid they come to life in her mind in ways the book she's reading and teaching cannot possibly record:


Then it's grey morning, and Sarah has disappeared.

Mother rises up. She feels light, light in her body, light-headed, achingly stiff and run through with panic. She rushes hither and thither, asking everyone what have they done with her child, her papoose. Sarah, her baby? She rocks her arms to show who she means.

Finally, someone points to the ridge above the village and mother climbs up there and finds the grave. She places her hands on the fresh dirt. She thinks, Don't leave me here alone. She will dig Sarah up, and she even pulls up a fistful of dirt to begin, but then she stops.

When Mother rises this time, she is a hollow thing, a ghost thing, a thing filled with air. She can imagine herself a dandelio gone to fluff, blown by her little girl's last breath, dissolving into a thousand separate seeds each with its own wing to fly off the ridge and away.

Remembering that the book is narrated by Evie's unborn twins explains the use of "Mother" and remembering that the dream being narrated is accompanied by sleepwalking and remembering...hell, don't remember anything, just read that passage and tell me you don't *get* in the depths of your guts the horror of a parent losing a child. That Evie is given this vision or transported to this moment in history, or however you choose to construct it in your reading, while pregnant with twins, tells the true story here. Evie is a terrified emotional cracked vessel. Evie, whose waking time teaching the teenagers of her neighbors is fraught with the usual angst and rage teens bring; whose nights are spent unkowingly wandering, possibly stealing but certainly taking others' belongings; whose undivorced ex looms in every thought she has about the men in her world; whose sanity just might be slipping away from her, is kept at just the right distance from the reader by the unborn twin narrators:


Holding her belly with one hand she hurries down the stairs in her long nightgown, through the living room, bangs painfully into the table with her hip, pulls open the door, and rushes into the spindly woods. She stumble-runs for a while, then finally stops, leans against a smooth grey beech tree, trying to catch her ragged breath. She leans her head against the slim trunk. She can see a bit of moon through the trees. She presses into her belly again, and again she feels us, something that is not her inside her. She can't stop smiling and poking at us. It's a wild, satisfied animal smile. She thinks, How good not to be caught in Joan's bedroom, how good here in the woods. How good my babies are both alive, and they lived under my ribs. She begins to walk again, humming one of those songs she'd taught to her students in California. This land is your land, this land is my land, it was made for you and me. She sings off key, and fiercely.

Like all the best ghost stories, this one is rife with funny moments...a Passover seder that's a hoot, a wardrobe malfunction whose hilarity leads to a sad and poignant moment with the religious family's denial and prudery; and the spooky but (to me, anyway) really hilarious ending of the novel, all meet in one moment which demonstrates that Micah Perks has big, big brass ones like I told you up top. Nothing is resolved, like in life, just gears shifted and four-wheel-drive mode engaged as all Perks' characters experience massive, painful, life-altering transformations in the circle of a fire on a beautiful night.

Welcome to the world, y'all. It doesn't get less screwed up outside Mother's womb. But y'all are in a world enviably rich and passionately alive. Most poor suckers don't get in a lifetime even half the fun of just y'all's gestational residence in Evie!