NOTORIOUS, a major Hollywood star's life of being her own damn self in the unforgiving spotlight 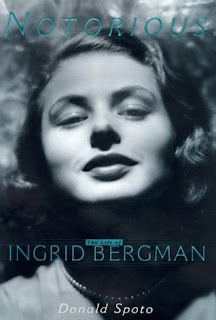 The Publisher Says: The life of Ingrid Bergman (1915–1982) is as compelling as that of any of the women she portrayed in dozens of unforgettable movies and plays—a list that includes Casablanca, Intermezzo, Gaslight, The Bells of St. Mary's, Notorious, Anastasia, and Hedda Gabler. Hers is a story that begins with a tragic childhood in Sweden, then moves on to the nightmare of Germany under the Nazis and later to Hollywood in its golden age. From her position as America's most beautiful, admired, and loved actress, she was plunged into national disgrace and branded "an apostle of degradation" for her adulterous love affair with Roberto Rosellini in the late 1940s. But her independent spirit triumphed in the end, winning her honors and accolades even as she fought an eight-year battle with cancer. Donald Spoto, who knew Ingrid Bergman and had unprecedented access to her husbands, friends, lovers, directors, and costars, as well as to her papers, letters, and diaries, has written a biography that the San Francisco Chronicle called "mesmerizing" and "deeply moving"—the definitive account of a consummate actress who dared to live the truth.

My Review: The subtitle says it all. For those who might be unfamiliar with Planet Earth, Ingrid Bergman was a stunningly beautiful film and stage actress of the 1930s to the 1980s. Donald Spoto, the author, will celebrate his 76th birthday this year (2017); he was a monk, a teacher, and then a pop-culture apologist/celebrist/analyst with some 20-plus celebrity biographies to his credit, plus several books on Christian/mystical themes.

Preston Sturges. Alfred Hitchcock. Grace Kelly. Miss Bergman. Diana, Princess of Wales. All subjects of Spoto's apparently unstoppable urge to biographize, expressed over the past 35-plus years. So look at that list: Is this author gay? Oh my goodness, yes. Gladly and openly so.

I start out each book, then, with a very strong connection to the author. He's One Of Mine. Small moments that might slip past a non-gay reader are here, smirking at me. I *love* that sense of being in on the joke. And that right there? That's the reason people read celebrity bios. They're in the know, they're totally equipped with gossip material, they are Inquiring Minds that are now sated. It's fun. It's harmless. It's hugely profitable.

IS it fun? For readers of the better quality books about figures of their personal interest, yes...for the fussbudgetty writers, probably...for the cooperative subjects, maybe. At any point in that chain, whether it be a writer whose passion for organizing and categorizing gives out before the job is done, finishing this type of fact-checking nightmare of a book can be awful, and not to mention the bliss and heaven of a source recanting important testimony! Or a cooperative subject who turns uncooperative!

Harmless? Hardly. Harmful in the extreme. We The People do *not* have the right to know what, for example, Ingrid Bergman felt in her last days on this earth as she slowly and painfully died of metastatic breast cancer. That her friends and family cooperated with Spoto, as Bergman herself had in a different context (a series of interviews about Alfred Hitchcock gave birth to this bio of Bergman, because she was very forthcoming with the author), does not absolve the reader of such a book as this of a defensible charge of prurience, and passive or active participation in a cultural trend that leaves those who are not resolutely anonymous with no zone of privacy anywhere ever. Contemplate that for a few seconds. What a horrifying thought. So spend that $30 and feel entitled to ALL THE DIRT!! The dirtier, the better. Then imagine that it's *your* life under this scrutiny.

Profits are made in stacks, for sure and certain, because the books keep a-comin'. Spoto alone has published 29 books to date. The publishers aren't in the charity game, so they're minting the spondulix or there wouldn't be any more.

Okay, all that said...this book was a blast! It gossiped my ears off for two whole days and the pictures were so cool! I loved the evocation of some of my favorite actors and movies and learned interesting new stuff about them all.

I admit it: I am part of the problem. But I have a smile on my face!
Posted by Richard at 6:30 AM